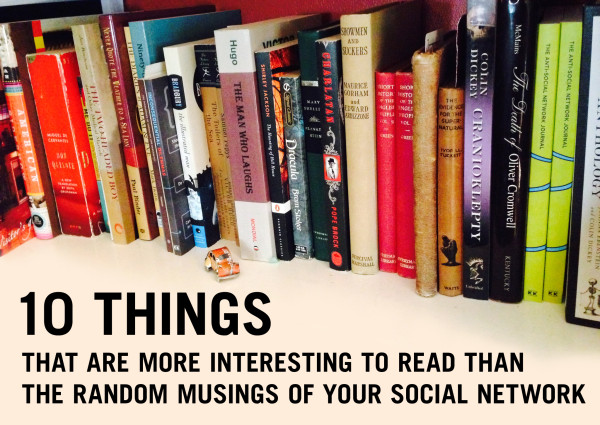 Spoiler Alert: They’re all books. Folks used to read those quite often before their free time was usurped by social network feeds. And by “free time,” I mean the 700 billion minutes a month spent on Facebook, which is supplemented by an average of 190 million tweets a day (according to statistics from July 9, 2014). That’s a lot time reading posts instead of literature.

Fortunately, books are still available and if necessary can be read on the same screen you’re staring at now. Try one of the suggested titles below, straight from my personal bookshelf—they’re like vitamins for your brain.

1. The Man Who Laughs by Victor Hugo. Follow the struggles and triumphs of a man who was disfigured in childhood, grew up with a grotesque grin (an eventual inspiration for The Joker in the Batman series) and falls in love with a blind woman. The Man Who Laughs is far more fascinating than any man or woman who’s LOL-ing right now.

2. Atlas Shrugged by Ayn Rand. What would happen if the world’s greatest thinkers and doers went on strike? By taking the time to read this 1,000-plus-page book, you can go on your own social network strike and try to survive without reading insightful comments on Sharknado.

3. Don Quixote by Miguel de Cervantes. His quests for adventure as a knight are hilarious, even 400 years after they were written. Posts about what your cat just did won’t be.

4. The Haunting of Hill House by Shirley Jackson. If you’re going to get creeped out, better it be by this masterful haunted house story than by advertisers reacting to your every post and click with behavior-based targeting.

5. Frankenstein by Mary Shelley. The title instantly conjures images of Boris Karloff, but Shelley’s monster is quite different and far more complicated. Her classic tale explores various themes of humanity and far surpasses any glimpses into the soul you’ll find in the average person’s browser history.

6. Dracula by Bram Stoker. The original vampire novel is much scarier than all the live tweets and Facebook comments regarding who wore what at the Emmys and VMAs.

7. Diary of a Surgeon in the Year 1751-1752 by John Knyveton and Ernest Gray, editor. Back then, they just didn’t know as much. So limbs got amputated left and right (literally). Had you suffered from an addiction to scrolling through misinformed political comments and goofy memes, it would’ve been off with your finger.

8. Charlatan by Pope Brock. This book recounts the bizarre career of Dr. John Brinkley—a charlatan who made millions during the Great Depression by transplanting goat testicles into men wishing to be more virile. Yes, it’s non-fiction. You’ll find it much more entertaining than unending baby-photo posts from your virile and fertile friends.

9. The Devil and the White City by Erik Larson. The Columbian Exposition of 1893 in Chicago (celebrating the 400th anniversary of Christopher Columbus’ discovery of America one year late) led to many wondrous inventions and our country’s first serial killer. It’s an extraordinary look back in history that’s sure to compete with any Throwback Thursday.

10. The Illustrated Man by Ray Bradbury. If Martians really are out there, they can thank Bradbury for some clever Earth invasion ideas—any of which could be as deadly to the human race as your social feed’s hashtags are to the English language.

Read just one—be it from this list or one of your own—and if nothing else, you’ll have something new to post about.

Marc Hartzman is author of our Anti-Social Network Journal ($14) and contributing Knock Knock blog writer. Check out his other hilarious posts here and enjoy his musings on how social networking has affected life as we know it—for better or worse!