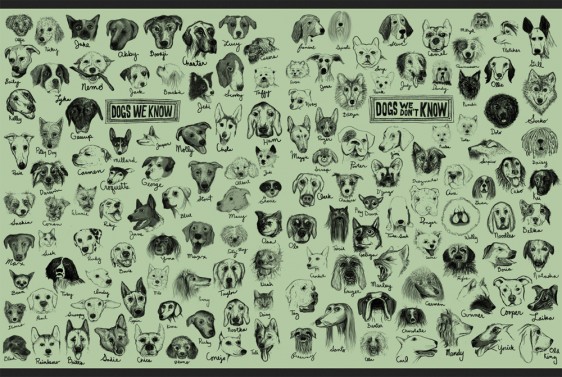 When I first started to look around tradeshows and see Knock Knock’s influence, sometimes a little too transparently, I was able pretty quickly to calm myself with the knowledge that imitation was one indication we were successful. It wasn’t that I didn’t feel hotheaded and indignant that other creators couldn’t find their own voices, and if so, they shouldn’t be playing the game, but instead the recognition that I was witnessing the inevitable and in the larger picture this meant we were doing things right.

Sometimes aspiring entrepreneurs or product designers come to me and say “I have a great idea for a product.” After asking me to sign an NDA and squinting with cagy suspicion, they allow that it’s an idea for a card. Or a pad. Or a sticky note. My response? God help you if you only have one idea. In the world of creative product, your longevity and success are based on your ability to come out with good ideas over and over and over again, and the produced good ideas are the winners among many, not a sole strike of momentary genius. When I see our, or another company’s, influence running too rampant, I know that we’ve played out that theme and it’s time to move on.

All of us more experienced and perhaps not insane gift-and-specialty companies (the industry term for us) know that we’re playing in the same sandbox. There are only so many things you can do with paper and ephemera and cloth and plastic. When I’m at a tradeshow and I see that file folders are coming up, and we have a great idea for file folders, I’m aware that it’s not appropriate to do it if only one company is doing it, but if I see a few doing it, and Knock Knock can bring something to the form that isn’t about competition but about what we want to create, then we make file folders. Great minds are constantly thinking alike, and honestly, there are a number of things we’ve thought of that we haven’t produced because someone else did it before us and we don’t want to be perceived as followers or copycats. Creativity is our stock in trade.

But then there are the actual copycats. The ones who, due either to lack of conscience (not too long about I read this book on psychopaths, AKA sociopaths, who, according to the book and this This American Life episode, are especially prevalent among CEOs; also, here’s a TED Talk about it) or complete and utter denial, can’t help themselves from stealing intellectual property. I find out about these copycats primarily from customers and other supporters (thank you!) who email us to say, “Is this yours?” One was a company I saw while walking around one of the gift shows, and it was so bald-faced that I was shocked they’d had the gall to obtain a booth. They had barely changed our wording. I plotted with a sympathetic retailer to check it out: she went into the booth, looked around, and said, “Is this Knock Knock?” The woman in the booth replied with a smug smile, “Oh, no. Our stuff is much more sophisticated than theirs.”

In the last couple years, the copycats have gone international. A small company in Argentina whose mission statement celebrates their creativity basically put our pads and sticky notes on a color xerox machine and then got very mainstream press on them! A not-so-small publisher in Germany asked to license our product when we nabbed them for their color xerox infraction. Are you kidding me? I’m going to do business with you? This is your reward for ripping us off? The current challenge in Australia is with a known knocker-offer, a very large company that has already lost similar lawsuits, which makes me think their CEO certainly must be a sociopath, because he clearly knows exactly what he and his company are doing and doesn’t care. I’m sure you won’t be surprised that one of my least favorite activities is pursuing these infringements with our attorneys and that my very least favorite check to sign is the one for these legal fees. We’re talking tens of thousands of dollars a year, and that’s even with assiduously avoiding litigation.

People often ask us who our competitors are. You may think this is disingenuous, but I don’t feel we have competitors. Instead, I believe we have peers. Since we don’t create generic commodity items, our products don’t have exact equivalents. Retailers and buyer want our sensibility. Other companies that have similar sensibilities may be competing with us for open-to-buy dollars (the term for the budget a buyer or retailer has for a certain product category and season) or space on a particular display table, but it’s our job to put out such good stuff that we’re happy with their choices to fly Knock Knock.

Big chain retailers have over time been building their in-house product development and design teams. We create customized product programs for many of these retailers, and one of the things they tell us is it’s difficult to knock off Knock Knock because of our conceptual underpinning and emphasis on language. They just can’t get it right. Of course they don’t state it exactly like that, but it’s the gist.

Not too long ago, I heard a sad story about the design company that does a lot of work for one of our favorite peer companies, Blue Q. How can you not respect and love Blue Q’s work? How can you not frequently kick yourself because they came up with something great that you didn’t? This design company, Modern Dog, does fantabulous work, much of which you’ve seen without knowing it was them. I recently became aware of a challenge that Modern Dog is having. A creation of theirs that is especially near and dear to their hearts was knocked off very broadly and very profitably by more than one multinational corporation. These corporations know that small companies don’t have the resources to fight back (because to do so is much more than the many tens of thousands of dollars Knock Knock has been spending) so they stall until their opponents go broke.

Modern Dog believes, as I do, that “Copyright law should protect everyone, not just those who can afford to litigate” and “Copyright only works if you are willing and able to protect it.” Would you believe also that as a trademark owner, you are legally obligated to fight to protect your trademark, and that if you do not fight each and every instance of known infringement, you have a much weaker case down the road, making it sometimes dangerous to back down whether or not you can afford to go on? Modern Dog, “like a lot of small businesses” doesn’t “operate with a reserve account for emergencies. And it’s not possible to apply for a lawsuit loan.” So they’re fundraising, something they were reluctant to do until friends pushed them to do so. Knock Knock has donated, and I think all folks who believe that this kind of creative theft and bullying is wrong should do so as well.

Modern Dog has chosen to sell the house in which they’ve had their offices for almost twenty years in order to fund the lawsuit and bring down overhead. Knock Knock so identifies with its home and surroundings, and I’m such a nester myself, to me that is one of the ultimate sacrifices. I think it’s critical that we make it less easy for anyone to steal others’ creative work, but especially the Goliaths who pick on the Davids—and Davids without slingshots at that, because slingshots are cheap but lawyers are costly. So I urge you—donate to Modern Dog, and keep your eyes and ears open for companies and people who are willing to steal creativity in order to compensate for their own laziness or inadequacies, and report them to the entities that put the hard work in to unleash something new and brilliant upon the world. Because we have a right to defend ourselves.