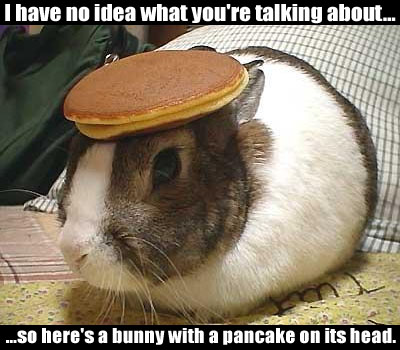 The first Google Images result. Note that the search pretty much yielded this image over and over again.

Alexis, one of our designers, suggested we google “bunny with a pancake” this week.

At first we were like, We did cute last week. Then we were like, Last week cute led us to Cuddle Parties. And we were furthermore like, What if looking at cute animals sucks up all our time? And seconds later, we were like, This is the first Google Roulette we’ve done where almost all the pictures that pop up are the same images.

But then we got into the bunny-with-things-on-his-head groove and wound up cherishing the five minutes we spent getting to know Oolong, a now-deceased bunny who sported pancakes—and so much more—on his head.

Oolong, a Japanese rabbit, lived with a photographer human companion who taught Oolong to balance things on his head. Oolong was also lucky enough to have his daily musings regularly documented. When Oolong passed away, in 2003, at the age of eight, he left online buzz ranging from the New York Times (which noted, “Photo blogs are the colorful offspring of blogs, or Web logs, written diaries posted and updated regularly on the Internet”) to an artist who painted oil still-lifes of him. We wish we’d had the chance to meet Oolong. Unfortunately, in 2003, we didn’t know what photo blogs were.