The Knock Knock marketing team just created the most kick-ass video ever. EVER. I’m really, really proud to debut it here, an introduction to an innovative children’s book in our Fall 2013 list, Hide & Eek!, by Hat-trick, the amazingly talented folks I met at Design Indaba a couple years back, and illustrated by Rebecca Sutherland.

The video is just beyond. But what’s even more beyond than the video’s beyond is that, as with the experience I outlined in last month’s Head Honcho Hello, this kick-ass video was made without any input whatsoever from me. I doubt that most people who aren’t entrepreneurs will understand how happy and proud this could make a lady. But the gratification isn’t just pride, and it doesn’t just stem from the fact that I no longer have to work ninety hours a week: a team that can execute without its founder (or, indeed, any one person in particular) is vital to the health of a young company, and critical to its value down the road. 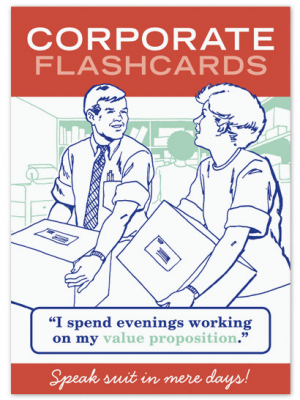 “Single-point failure” was one of the first pieces of execuspeak I learned when I entered the strange world of business. Indeed, there was so much weird jargon that we created Corporate Flashcards just to explore that rich and freaky world. No sooner had I learned what single-point failure meant than it became my biggest nemesis. One formal definition of single-point failure is “a part of a system that, if it fails, will stop the entire system from working.” In business, it basically means that there’s no backup: one person and only one person does, knows, or encodes something, and he or she goes out of commission. Or quits. Or dies.

In the early stages of a business, single-point failure is one of the biggest risks an entrepreneur faces because a young company’s staff is so scant. At first you have a few people each wearing multiple hats. Then you have one accountant, one manufacturing person, one ops person, etc. Each one of them is single-point failure. We’re now at a point that in every department we have at least double-point failure, meaning that two people have to die (or, you know, leave) before Knock Knock is good and truly screwed.

One of the biggest challenges with Knock Knock, though, has been its creative focus. Knock Knock’s voice started as my voice, and I concepted almost everything and wrote every word. If I had wanted to sell the company in those days, I wouldn’t have had a company to sell. I would have been selling only myself (which, believe me, I’m not above doing). It was the superstar model of business, with everybody else executing on the things I envisioned. Never mind what would have happened to Knock Knock had I gotten hit by the proverbial bus.

Together with Knock Knock’s management team, I began focusing on this challenge about six years ago. Hiring the right folks was a big part of solving the problem, but the biggest hurdle was replacing myself. And I couldn’t just replace myself with another single-point-failure superstar. If I wanted Knock Knock to be my (and others’) nest egg down the road, Knock Knock needed to be a team capable of creating and distributing great products without requiring any one person, a team equipped with the company’s DNA and know-how and proprietary processes. An analogy: the Spanish city of Ávila is completely surrounded by a stone wall built in the eleventh and twelfth centuries. It is said that each and every stone has been replaced during the wall’s maintenance over a millennium, yet it is still the same wall. That’s what you want with a team, with a company.

The right creative makers—writers, editors, designers, creative directors—aren’t so easy to find. They’re the chefs of Knock Knock’s secret sauce. And the company’s proprietary processes around creating neato products are far more difficult to articulate and formalize than the operational stuff. That means (unfortunately for the operational team members) that the moments when I realize this entire team kicks serious ass and can do about 95 percent of the business without me are more frequently when creative projects come to fruition. The operational team is less visible and their vital contributions are often apparent only when things go awry, poor souls. I do frequently find myself, however, asking something about international logistics or general ledgers or manufacturing compliance or routing guides or buyer turnover, etc., and the answers make me understand that this team has so far surpassed me in sophistication and capability that, well, I kvell with pride. And feel a little embarrassed that I might have asked a stupid question, or proposed that a software problem be fixed with, say, a typewriter. Plus, there’s not a small amount of gratitude that I don’t have to do or know the details of that stuff anymore.

Someday I and the management team of Knock Knock will likely decide to sell the company—or maybe just retire to be absentee owner/managers and still draw a paycheck (I’ve always thought “passive income” was an oxymoron, but maybe I’ll be proven wrong). I don’t know when that day will come, and it’s not in the immediately foreseeable future. When we do, however, the value of the company will be determined not by my ongoing contributions, but by the ability of Knock Knock to continue its own legacy. And that’s exactly what I see and feel when I’m presented with something as awesome as our Hide and Eek! video, something I had nothing to do with, something I probably would have done differently (and likely not as well), something that I got to enjoy more as a proud parent than as an accomplished creator. That’s when I really, really like my job.*

*You’re probably wondering what my job actually is at this point, given that everybody can do everything without me. I would say my role has evolved from doing just about everything—chief cook and bottle washer—to being the sprinkler of fairy dust, asker of hard questions, initiator of new projects and strategies, big-picture overseer, lawyer liaison (barf), and mascot. Mascot might just be my favorite.