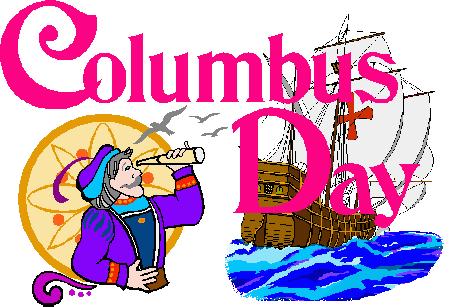 Without chance, the world would just be boring. And without Google Roulette Mondays, in which we put a chosen word or phrase into Google Images to see what comes up first, frivolity would have no meaning.

Since today is Columbus Day, we thought it was an appropriate subject for Google Roulette. Although the state of California doesn’t consider Columbus Day a legally paid holiday (it was revoked in 2009), right now we’re at our desks wondering which beach we would be lounging at if it we had the day off.

Anyways, the first image looks like the person who created it went Microsoft Paint-happy, which runs right along with the Microsoft clip and word art graphics that usually pop up in these searches (oh to be in 1998 again). Also, we’re curious as to why this version of Columbus looks like he could be Don Quixote’s twin brother.

Aside from the majority of pictures that came up that overused ships, compasses, and the phrase “Land ho,” the seventeenth search result was of a 2008 Val Kilmer movie titled “Columbus Day.” (IMDB.com’s summary: a thief tries to fix the damage done during the biggest heist of his career. It sounds like a big, dramatic, action-packed winner.)

In addition to our typical search, we wondered which Knock Knock product Mr. Columbus would have used while he sailed the ocean blue if our company existed back in 1492. He probably would’ve used our Travel Life Log, Pack This Pad, or the Bon Voyage Tablet to keep his travel itinerary afloat (pun intended). And the people that were already established in the Americas at that point would’ve had WTF Stamps and Hey Asshole Pads at ready. Okay, at this point our mind is just drifting  . . . so back to work we go. And for those of you who have the rest of the day off—have a safe and fun Monday.