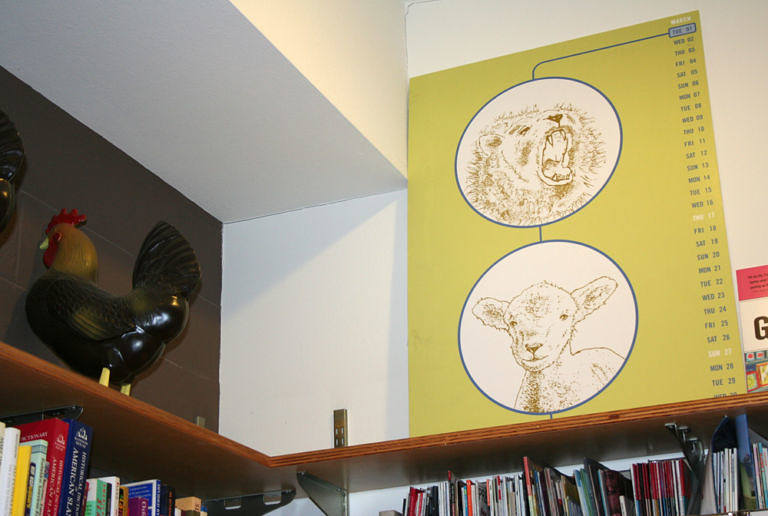 KISS—“Keep it simple, stupid.” Not my forte. I like things that have complexity and interest to them, and you may already know that one of my mottos (and I say “my” because successive Knock Knock writers and editors are delightfully more terse than I am) is “Why use fewer words when you could use more?” Even if you don’t know that, you may have noticed that my blog posts are way too long. Way.

Years ago—maybe seven—we were asked to contribute a month to a calendar that would comprise twelve individual cards. The design was to embody that month in some way; we were assigned March. I thought what we did was so very clever, and I still love it. A huge version of it, mounted onto foam core, looms above the office’s “editorial horseshoe” (what we call the place where the KK wordsmiths sit).

Perhaps you wouldn’t characterize our calendar page as unsimple, or as complex, but the mental leap from visual to verbal certainly turned out to be. And therein lies one of Knock Knock’s continual balancing acts: we want to make products that are as smart, unique, and non-dumbed-down as possible, but if they’re too smart, unique, and non-dumbed-down, enough people probably won’t get the concept to sustain it in the marketplace. Another example of this: we frequently hear from potential PR outlets,  “We love it, but it won’t read on the page” or “We love it, but it’ll require too much explanation.”

The best products hit both marks—smart, conceptual, and accessible. To me the Personal Library Kit (our only product still in print from our very first release, in 2002!) is an exercise in perfection there.

Die-hard Knock Knock fans do sometimes love these more complicated, non-selling products. They’re certainly some of my favorites. But if they don’t sell, we don’t pay the rent. In some ways they’re more like collectibles than products. At times I notice our list veering more toward the broad, the gag, the ba-dump-bump, and I know we need to get some über-smart stuff in there to balance out the WTFs. But it’s a difficult juggling act—what sells vs. what you love.

We came up with a bit of a rule of thumb for this in reference to our Fete-a-Tete party packs. We think these are splendid, smart, and fun—just add a bottle of wine and you’ve got an instant party. We also love the graphic design of the packaging and feel it’s very Knock Knock, what with the how-to infographic-like drawings and all. But people don’t get what they are at a glance, something we learned early on when we had to explain them at some length in our tradeshow booths. From this product, we concocted a KK rule: “The more complicated the product, the simpler the name and presentation have to be.” With Fete-a-Tete, that means we should have used photography on the front, showing an explanatory vignette, and we should have called them “Party Kits for Two” or some such.

We refer constantly during works-in-progress meetings and in orienting new creative employees to the three-second rule (no, not the one that involves dropping food on the floor). Our three-second rule is that someone has to understand the basic essence of a product in three seconds. A more complex version of that is that they have to get it in three stages: (a) from across the store; (b) from right in front of the product; and (c) when they then pick up the product. You don’t get to B without A, and you don’t get to C without B. You have to imbue the packaging with clarity and appeal for each of those three stages. People inexperienced in product design will often say, “But they’ll understand what it is when they pick it up and read the text on the back!” Ah, the innocence of those who’ve never designed product.

I really want to go into the over-complexity and at-least-120-second requirement of one of my favorite products we ever did, the Wishing Kit, which was included in our first release, in 2002 (since this years marks our tenth anniversary!), but I’m going to take my own KISS advice and hold that for another post.

In the meantime, I’m trying really hard to bring KISS into my own life for March 2012. I’ve actually just started a personal leave of absence to attend to a few top-secret personal projects as well as focus on some work-related writing projects. Since one of the main goals of the leave is to bring down my stress level, KISS could very well be my friend. How to KISS when you’re juggling both work and the rest of your life? I haven’t solved that one yet. But for all of us, a little dash of KISS would probably be an improvement—at least for March 2012.

*The calendar page illustrates the saying “March comes in like a lion and goes out like a lamb.”