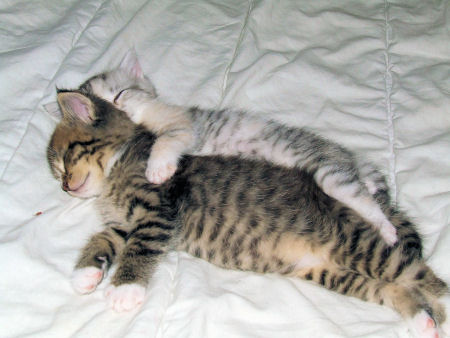 The thirteenth Google Images result. The little one is acting as the “big spoon.” Role reversal. Cute overload.

We’re not sure what it is about cuddling animals that make our hearts go soft and our crankiness cease. And since it’s Monday, we thought we would spread the cuteness (and stoop to the level of luring you in with delightful kitten pictures).

Which cuddling kittens picture do you think is cuter—the first image result or the thirteenth? It’s says something, though we know not what, that three out of the first thirteen pictures were cats cuddling, and two out of the thirteen were similarly embracing polar bears. But this breed-defying picture may just be the cutest of the search.

As you would imagine, many “cuddle” keyword results are indeed adorable. The seventh, however, was the opposite—borderline disturbing. From first glance, it looked as though a heap of adults took the O’Jays’ “Love Train” song literally.

We couldn’t help but investigate where this mysterious picture came from, and we weren’t disappointed: it’s featured on Cuddleparty.com, the site of a nationwide nonprofit that promotes social events and workshops “designed for adults to explore communication, boundaries, and affection.” Their “About Us” describes,

You can come to a Cuddle Party to meet new people, to enjoy amazing conversations, to touch, to be touched, to have fun, to practice asking for what you want, to practice saying “no” to what you don’t want—all in a setting structured to be a safe place for exploration and enjoyment.

We were sad to see that we’d just missed this Cuddle Party, which sold out in two days. How much does a Cuddle Party cost to attend? Apparently it starts at $40, but they’re nice enough to provide a sliding scale for those in need, down to $20.99, for ladies only because the event organizer is “barely making [her]* rent.” Fortunately, even though we couldn’t be there, this video made us feel as if we had been.

*Like many people who have trouble making their rent, this particular Cuddle Party’s leader is vastly overeducated:

Please excuse us while, as an office, we take a moment to learn Radical Forgiveness and Psycho-Cybernetics. We’ll be right back, at which point we’ll c0mmence to paying our rent.