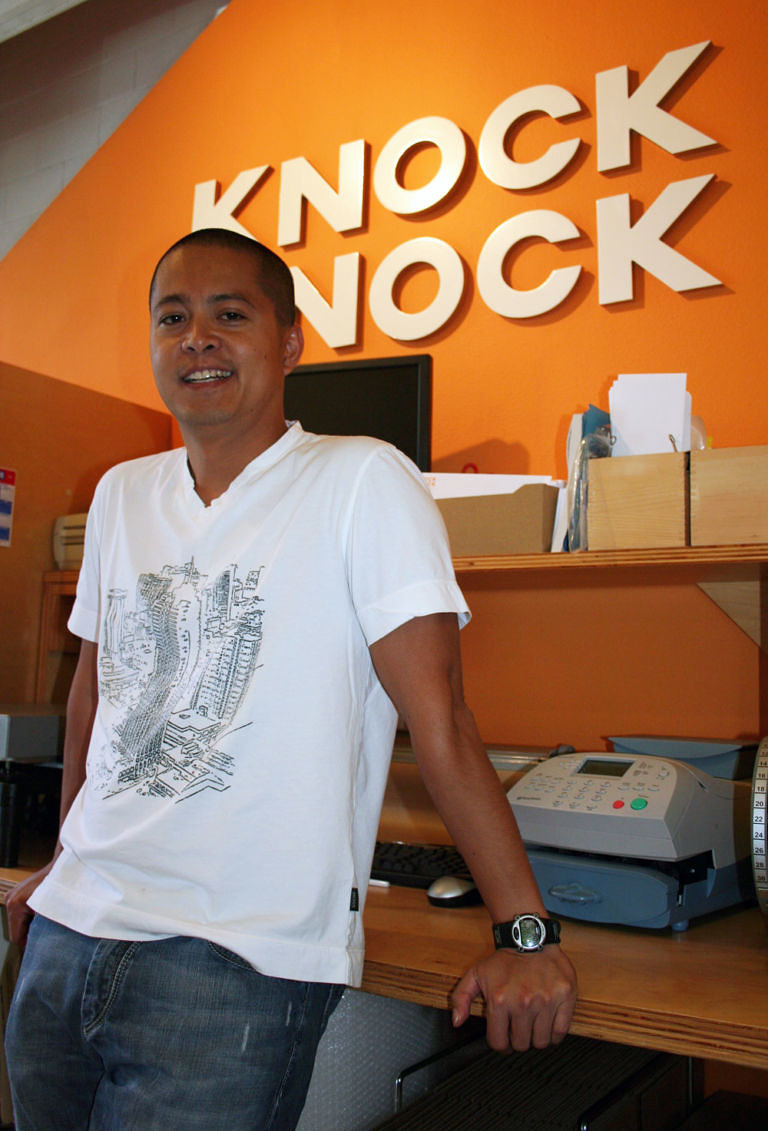 When I'm not crunching numbers at my desk, you can find me at the KK shipping station—it's like my second home.

2. Originally from? I was born in the Philippines, but have been in Los Angeles since I was five. I’ve lived and worked in a lot of different areas around LA—Oakwood, Echo Park, Los Feliz, Park La Brea, Long Beach, North Hollywood, Northridge, Santa Monica, and Venice. Odd, but that also summarizes my relationship history. Ha!

3. What the hell do you do all day? That depends on who’s asking. But according to a recent confidential evaluation, I “manage vendor relationships with several key outside contractors—3PL, logistics and distribution, IT programmers, and other consultants” as well as “manage inventory” and be “responsible for all budgets in these key areas, as well as special projects.” If that’s what my boss thinks, then that’s the story and I’m stickin’ to it! But I also dabble in a little bit of this and a little bit of that and find myself involved with other KK departments. So if I’m not assembling office furniture or overloading the transmission in the head honcho’s SUV with KK product, I’m probably working on a spreadsheet trying to figure out what we need, when we need it, when we’ll have it, how I’m getting it here, how I’m getting it out of here, and when we have to pay for it.

4. Favorite thing about working at KK? Harassing my coworkers. There are so many to choose from. And if not that, it’s the people and the product that make this job a no-brainer. Glad to say this job has its moments—and a lot of them. Laughter is quite common. Just look at the product, duh!

5. Favorite hobbies outside work? That would definitely have to be strapping on my leathers and gear and having 904 ccs of pure Italian bliss between my legs. And that’s no euphemism—I’m talking about my motorcycle. Unfortunately, I don’t get to go on weekend rides too much so I have to settle for adventures on the 405 during my commute to work. I won’t be the idiot charging through traffic between lanes at Mach 2, but I might be the fool behind him. Lead the way, you crazy SOB! When I’m not on the bike, it’s all about home DIY projects and rebuilding an old Jeep with original blue plates. Who knows what I’m talking about? And no, I’m not really a mechanic but I do have some skills (thanks to books and the internet) and a lot of new tools. It’s truly amazing what resources you can find online. You can do anything!

6. Did your professional life exist before Knock Knock? Previously I was in the bicycle industry (for fifteen years) running a catalog, website, and warehouse operation before we were swallowed up by a larger fish. Bastards! But I’m not bitter.

7. If you were a superhero, what would your name and superpowers be? I don’t know about being a superhero but I’d want to be Wile E. Coyote just so I can catch that damn bird! Then I could truly say “super-genius” (an inside joke on the business side).

8. Except for bills, what do you spend the most money on? My girlfriend. Actually, she’s not that bad. It’s more about the weekend traveling to see her—to Phoenix. Yeah, Phoenix. But I’m doing my part for the economy and making Southwest, and the Terminal 1 bartender by Gate 7 (yeah, you know which one I’m talking about!), quite happy. Ding!

9. Favorite place to sit back and relax? That has to be the backyard, after grilling on my KK-orange barbecue. I’m actually in the (long) process of a backyard makeover. Where’s Ahmed Hassan when you need a yard crash? I don’t see him at my Lowe’s! Anyway, I’ve turned into my father, and all I can think of after saying that is: “Luke . . .” There’s my movie reference. So, like my father, I’ve become a DIYer. I’ve built the beginnings of a huge deck and pergola project, constructed some planter boxes, put up some sail shades, bought some new patio furniture and way too many lanterns, and I’m trying to figure out landscaping that can survive Arizona’s triple-digit heat. Not easy. Manscaping—easy. Desert landscaping—not so much.

10. Food or drink you couldn’t live without? Red meat and red wine. I could never be a vegetarian. Maybe I’d consider it if they could make vegetables taste like steak.

11. What advice would you give your past self? That girl is way too young for you. That’s all I’m going to say about that.

12. Song you would pick as your theme song?

That would have to be “It’s My Life” by Bon Jovi.

(It’s my life)
My heart is like an open highway
Like Frankie said, “I did it my way”
I just wanna live while I’m alive
’Cause it’s my life

I didn’t exactly make all the right decisions, especially in my younger years but who does? And that would have been way too boring. This was evident by the skydiving adventure years ago, which included “It’s My Life” in the video. Seemed appropriate at the time.