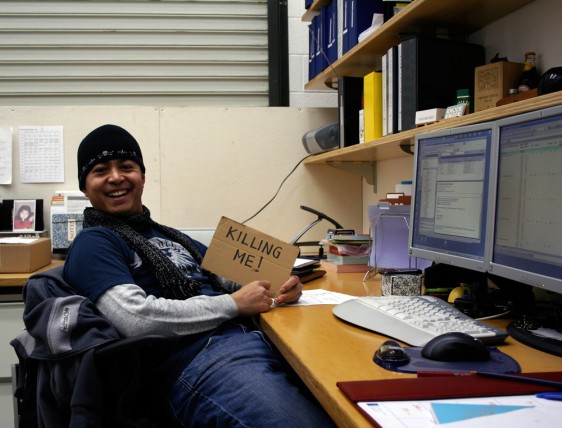 A few of us have stayed on team Knock Knock for the long haul these past ten years (besides Jen, of course). Gil Vizconde, who has been a Knock Knocker since 2004, is one of those select individuals. In this special “In It for the Money,” we picked Gil’s brain on his time at Knock Knock.

1. Knock Knock title you had when you started: Slave. It’s funny, but I really can’t remember. Now I’m the director of operations (DOO)—still a slave, but I get paid a lot more and I get to tell other people what to do.

2. What has changed the most over the time that you’ve been at Knock Knock? The number of offices we occupy. Other than that, the business has grown tremendously and our brand is found everywhere.

3. What are you proudest of during your time at Knock Knock? I can’t recall any specific event, but every year has been an achievement in terms of what we’ve done as a company, as well as personally in the various roles and positions I’ve had throughout the years. To grow year after year is a lot to be proud of.

4. What do you think would surprise people the most about working at Knock Knock? I think the biggest surprise is the size of our company (FYI, we currently have twenty-five employees). We’re small, but we get a TON of crap done. It amazes even me!

5. What’s the hardest part about working at Knock Knock? Commuting from Phoenix, Arizona, and keeping Jim, the “Prez,” under control during meetings. He gets a little excited sometimes.

6. What’s the best part about working at Knock Knock? It’s gotta be the roll-up door on the business side! Okay, maybe it’s the people and the product—both super cool. And having an office in Venice less than a mile from the beach isn’t bad either.

7. What has surprised you the most about working at an entrepreneurial startup company? It has to be the amount of creativity and work that gets put into every item we sell, from the early idea stage, all the way through production, to the final stage of distribution. It’s so much more work on this side of the business (production and manufacturing). I was on the entrepreneurial retail and selling end previously, so buying and selling product now seems so much easier to me.

8. What’s your favorite discontinued Knock Knock product? I almost forgot about the original Composition Book. It’s the perfect notebook with a hard cover, a strap to keep it closed and your crap inside, perforated corners to mark where you left off, and doodling dots on the bottom.