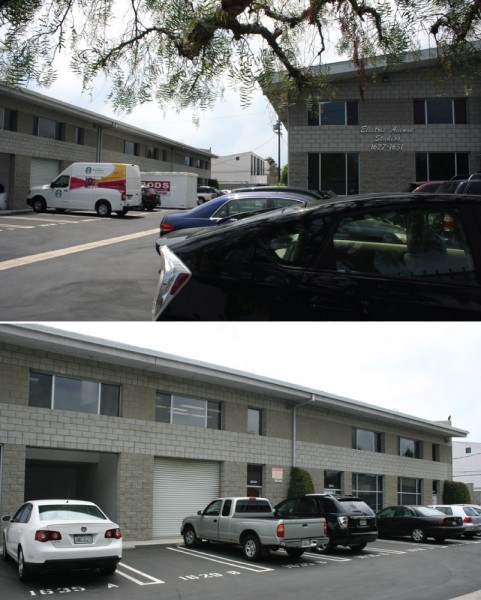 We’ve been here since March 2002, the full ten years of our existence. I believe I’ve told the story before that just as I’d determined I was indeed going to give this Knock Knock idea a go, I was walking a then-one-year-old Maisie in the neighborhood and saw the “For Rent” sign on the Electric Avenue Studios. When I signed the five-year lease, I thought to myself, “Well, if this venture doesn’t fly, at least I’ll have room for all my arts and crafts supplies.” I took great pleasure in planning out the space and designing its built-in work areas (in Quark; I hadn’t yet been introduced to Illustrator, and I’ve never been able to get over the initiation hump on AutoCAD) and making it the artist’s-studio-plus-a-few-workstations that I never knew how much I wanted. Hell, who wouldn’t want it?

In August 2002, we took over a second unit on a month-to-month basis to use as a photography studio for our first catalog; warehouse for our first batch of inventory; and staging area for our first orders. By mid-2003, both spaces were full of people and stuff. With a startup created by a virgin entrepreneur, it’s impossible to know what the future space demands might be. And if you don’t start in an office park environment with prefab modular cubicles and scalable (and leasable) office furniture, you’ll find yourself doing lots of scrambling to create workstations—especially if you’re unfortunate enough also to care what they look like. Thank god for Ikea, which understands that some people like cheap stuff without adornment in shades of bright white rather than faux woodgrain.

By August 2003, we’d moved our inventory and warehouse operations to (fraudulent and incompetent, it turns out) third-party fulfillment company and had begun manufacturing fully assembled product overseas, so we didn’t need the space to store and sort and collate and shrinkwrap and label and ship anymore. The second space evolved into more workstations. Running back and forth between the two nonadjacent units, however, took a togetherness and efficiency toll, and after a while, neither space was well suited for our needs. So in early 2005, we undertook to move another company (oddly, also fraudulent) from one space in the complex to another in order to have two contiguous units. We did a renovation that drew the second floor across the full space (vs. the half-lofts of the original units) and linked the two as open spaces. This was neither cheap nor financially prudent, but we loved it then and we love it still.

The complex, called Electric Avenue Studios, was completed in April 1994 by our landlord, the inimitable Robert Slayton, whose eighty-ninth birthday was yesterday. He’s a lifelong entrepreneur who started out in the garment industry. Robert’s been a support and mentor to me and Knock Knock from the beginning. He doesn’t suffer fools (or crooks—and if I’d taken his advice, I could have avoided a lot of trouble on that front) easily, but I’m grateful that he suffers me. In addition to his business savvy, Robert is incapable of telling a boring story. A Brit, Robert was part of the engineering design team (a stress analyst, to be specific, working in a commandeered golf clubhouse, no less) on aircraft designer Barnes J. Wallis’s “bouncing depth charge” concept, an innovation that allowed the Allies to take out important German dams and cause catastrophic flooding. The bombs had been newly invented to get through torpedo nets by using the physics principle of skipping a stone across water to get the bombs to their targets. The feats were memorialized in a book and movie, Dam Busters. Apparently, in addition to helping the Allies win World War II, this was good preparation for business success.

Robert owns almost the entire block of Venice that we’re on, including the former art studio of Ed Ruscha, next door, which used to be a beer distribution building with a loading dock opening directly to the Southern Pacific Railroad, on tracks that had still not been entirely covered over when we moved in. Robert purchased the properties in the 1960s, when Venice was far from chic, before Venice Blvd. had been widened to double its breadth, before the remaining canals had been rescued from their squalor, before Washington Blvd. had been renamed Abbot Kinney. (For years, I’d heard tell of the famous Eames studio at 901 Washington, somehow on Abbot Kinney, cemented by Charles Eames’s charming grandson Eames Demetrios’s elegiac 1990 documentary, 901: After 45 Years of Working. This confused me. Finally I learned of the street’s name change and identified the building.) I asked Robert how he’d known to invest in industrial, down-at-the-heels Venice real estate. He replied, and I paraphrase, “I knew that beachfront property is, by definition, finite. I knew that people always want to be by the water. They’d want to be close to LAX and Westwood and Beverly Hills and other well-developed residential areas. I knew that everybody looked to Santa Monica and to the South Bay, but at some point they’d need more room and Venice would appreciate.” Clearly he had the long view, an affinity I sadly do not share. Robert and his family also own property in Beverly Hills and a shopping mall in Seattle, among others, but I find it telling that Robert’s own office is here at Electric Avenue Studios.

Robert’s inspiration for the complex was the town square, two buildings facing a parking lot commons. The units are each 1,100 square feet and consist of a full-footprint first floor with a half-footprint loft as the second floor. His prescience in designing the complex for maximum flexibility continues to impress me. He made the loft construction more hefty than it needed to be in case anyone ever wanted, as we did, to draw across a complete second floor. Every other connecting wall is not load bearing and thus can be taken down to form a double-wide open space. Every other other connecting wall is cinderblock, but there’s a door frame in each to allow for daisy-chaining the units together. Each unit is a mirror image of the one next to it to accommodate these variations. He used simple, honest materials—cinderblock, cement, roll-top garage doors—to create a chic but unpretentious canvas for the complex’s inhabitants.

In late 2009, we needed a third space. Robert had never before been willing to rent out three spaces to one tenant because it’s a triple vacancy risk should that tenant decide to leave, so we were very grateful when he decided to take a flier on us. Having learned some frugality lessons, we built out the third space much more simply than the earlier two-unit renovation. We converted a workstation area into a much-needed conference room in the middle space; moved all the business functions into the new unit; and gave the upstairs of the two combined offices entirely over to the creative departments.

As of September 1, 2012, we will be the proud and fortunate renters of a fourth space. We’re taking the unit over not because we need it right now this very second, but because we know we’ll need it soon enough and it’s coming up for vacancy. Rather than spend money with a buildout we don’t yet need, we’re going to turn it into a temporary rumpus room. The upstairs loft will be all couches, for impromptu meetings and laptop work sessions, while the downstairs will become our commissary and all-company meeting place. I’m over the moon about the fact that we’re going to be bringing in ping-pong table, because I love ping-pong. We had a ping-pong table early on, but we needed the space so quickly that it was almost immediately covered with inventory assembly materials; I’m really hoping we’ll be able to keep this one for a while. (As it happens, Robert is also quite good at ping-pong, but I’ve forgotten the story behind that.)  We’ll also use this fourth space for an on-display product archive and for our in-house inventory, which we keep for things like PR and sales samples and last-minute birthday presents. At some point, we’ll have to build workstations in the space and link it to the other three, but for now it will be mostly recreational.

My dream is one day—in fact, at the end of the five-year lease on the four spaces that is set to start September 1—to renovate and move into the former beer distribution building next door. We’d have completely dedicated and unified spaces in a free-standing building. Robert is rooting for this plan as well.

When we have the fourth space loosely thrown together (again, thank you Ikea), we’ll post pictures. In the meantime, let’s wish a collective happy birthday to Mr. Robert Slayton, landlord, mentor, and raconteur extraordinaire. I can’t imagine Knock Knock existing in anyone else’s realm.