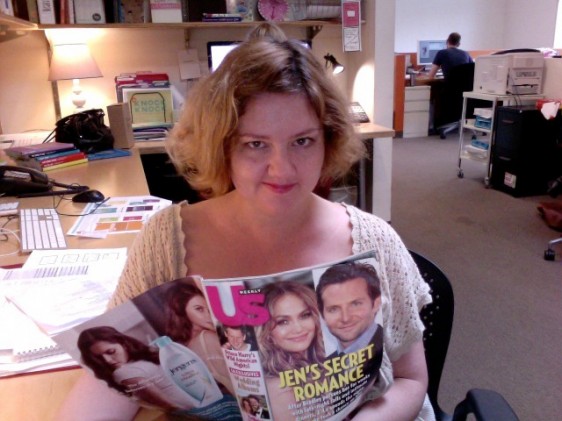 2. Originally from? Los Angeles. I was born in the original Cedars of Lebanon Hospital, which is now the big blue Scientology building in Hollywood.

3. What the hell do you do all day? Smash subatomic particles in search of the elusive Higgs boson. Also, I write, edit, and proofread books and products, and help to invent new ones.

1. Working at my desk while there’s a creative meeting downstairs. Every so often, the quiet is broken by these wild outbursts of maniacal laughter. It is very reassuring.

2. Everyone in the editorial horseshoe is constantly laughing to herself while working. Unlike most offices, we usually don’t ask each other what’s so funny, because we’d never get anything done.

6. Did your professional life exist before Knock Knock? No. I hypnotized them during the interview process with my skills of interpretive dance.

Just kidding. My first “job” was at an English-language newspaper in Prague called Prognosis. I was a journalist for many years, music editor at LA Weekly, and also had a public radio show called Pop Vultures. I loved interviewing musicians. I have some pretty good stories.

7. Favorite Knock Knock product? The Personal Library Kit. My mom teaches writing and I gave it to her years ago to make sure she gets back all the books she loans to her students. More recently, my wonderful boyfriend became a librarian, so this product has even more sentimental meaning to me.

8. Favorite TV show? Of all time: Gilmore Girls (I love it madly. But I’m not a chat room weirdo with twenty-seven cats about it, I swear). Of the moment: Two Broke Girls. (They have a real, live horse!)

9. Pet peeves? It bugs me when businesses use “at” in their name to sound fancy. I just went to a hotel called “SLS at Beverly Hills.” What’s up with that? Were they trying to be more grammatically correct, since they’re actually on the far edge of Beverly Hills? (I doubt it.)

Another pet peeve is music snobbery—the idea that ELO, Hall & Oates, the Bee Gees, or Herb Alpert & the Tijuana Brass should be “guilty” or ironic pleasures.

10. Hero in life you look up to? Lately I’m really into my dad—totally classy, witty, wonderful writer and man. Also, Vin Scully, every native Angeleno’s second dad. Oh, and the always effervescent Roger Ebert. OK, that’s like two and a half dads right there! (Can I add Barack Obama?)

11. If you were granted one wish, what would it be? That radio ownership laws had never been deregulated and that the mp3 and ProTools had never been invented. I guess that’s three. OK, how about this, then: that music was as good as it was forty years ago, in the era of Queen, Led Zeppelin, T. Rex, the Temptations, etc.

12. What advice would you give your past self? Don’t let the robots in!