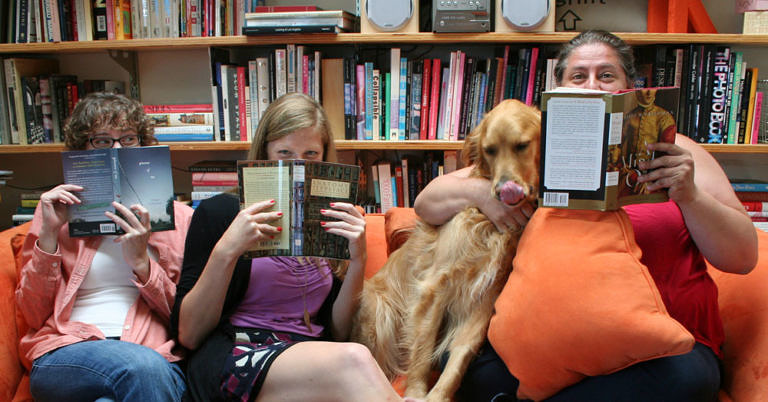 Here at Knock Knock, we’re not “regular bookworms”—we’re literature zealots. We’re ravenous book lovers, devouring novels, newspapers, magazines, and RSS feeds on a daily basis, and end up still asking the reading gods for extra helpings. So in our newest feature, “Between the Stacks,” we’re delighted to share our own reading recommendations and reviews.

Summer is almost here—fifteen days and counting! With our Bookmark Pads at the ready, we can’t wait to kick off the season with some good reads. Our cup runneth over with book recommendations, so we had to divide our Knock Knock summer reading list into a three-parter.

In this Knock Knock summer reading post, Sara, our e-commerce manager, Jen, our head honcho, and Chelsea, our manufacturing coordinator, advise on what books you should stick your nose in.

1. Life of Pi by Yann Martel. I’m currently reading this book and was enthralled from the moment he mentioned the three-toed sloth (having done a book report in third grade on the subject). I immediately felt a kinship with the main character of the novel, a boy named Pi (short for “piscine,” the French word for “pool”), who is the son of a zookeeper and spends his youth in Pondicherry, India, surrounded by animals. I haven’t finished it yet, but I’d recommend it based on what I’ve read so far. It inspired me to think differently about zoos in general, and I hope to pay a visit to the famous San Diego Zoo soon.

2. The Bond: Our Kinship with Animals, Our Call to Defend Them by Wayne Pacelle. I have a five-and-a-half-year-old dog named Lucy, who I rescued from the pound when she was one. I can honestly say she’s one of my best friends, and my life was changed the day I brought her home. My mom picked this book up for me and I’m really excited to read it because it’s written by the president of the Humane Society. I’m curious to learn more about the organization, in addition to hopefully getting a dose of research about how humans’ relationships with animals have evolved in the past 200 years.

3. The Way the Crow Flies by Ann-Marie MacDonald. Recommended by my friend Sara, I’m excited to read this book because I’ve read another novel by the author (Fall on Your Knees) and especially enjoyed her use of language. There were several passages from that book which read like poetry to me. Plus, this one is set during the 1960s, an era that fascinates me for all of the groundbreaking events which transpired during it.

1. Wild: From Lost to Found on the Pacific Crest Trail by Cheryl Strayed. Best memoir I’ve read in a very long time, and I know from memoirs (as a nosy voyeur drama queen, it’s one of my favorite genres). Fantastic combo of outdoor against-the-elements story and inward emotional journey and exploration of awful things like mother loss. And PS, I picked this before it was announced as Oprah’s first book club redux selection.

2. Agent Zigzag: A True Story of Nazi Espionage, Love, and Betrayal by Ben Macintyre. Recommended by Henry Julier, one of the founders and managing members of the American Design Club, a kick-ass group that puts on exhibitions of the work of up-and-coming product designers. How could you not want to read about Eddie Chapman, “one of the most remarkable double agents Britain has ever produced”? According to Henry, no sentence in this book is bad. Or maybe he said they were all good.

3. Born to Run: A Hidden Tribe, Superathletes, and the Greatest Race the World Has Never Seen by Christopher McDougall. The main character in this account, Micah True, aka Caballo Blanco, is an ultra long-distance runner who spent part of each year among people who are thought to be the best runners in the world, the Rarámuri Native Americans. I heard great things about this book when it came out, but was spurred to action because Micah True died last week, ansd he was the subject of a great New York Times profile. “Full of incredible characters, amazing athletic achievements, cutting-edge science, and, most of all, pure inspiration, Born to Run is an epic adventure that began with one simple question: Why does my foot hurt?” My feet hurt, so I feel like it’s a twofer.

1. I plan to read This is How by Augusten Burroughs. This latest offering from the fabulous writer has individual chapters teaching you how to do everything from “How to Feel Like Crap” to “How to Finish Your Drink.” With his signature self-deprecating humor and raw, honest voice, I plan to enjoy this book like one would enjoy a cool ice cream cone on a hot day.

2. Another title I am frothing at the mouth to read is The Forsaken by Lisa Stasse. It’s the first in a series of dystopian books with the main conflict being where future criminals are sent in punishment of their crimes. The premise sounds gritty and intense, and I am looking forward to it!

Now it’s your turn! Tell us what you’re reading  in a comment below!