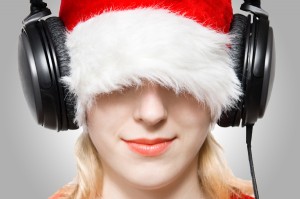 Nothing warms your heart and gets you in a cheery mood like holiday music does (okay, and a few whiskey-cokes). We picked out our favorite holiday songs for you to enjoy and freely blast from your speakers:

3. Brad’s pick for Maise and Paco: “Christmas is Going to the Dogs” by The Eels

A note from Jamie: “You have to listen to and watch their uncomfortably awkward banter before the song to contrast it with their exquisite harmony. Seriously weird—who the hell thought this one up!? But I love! And of course, I then had to look it up, and here’s the story.

“My Favorite Things” by Woody Herman and His Thundering Herd

7. Rex’s pick: “Rockin’ Around the Christmas Tree” by Brenda Lee

*Both Rex and Kate picked this song as well!

“Santa Claus Is Comin’ to Town” by Mitch Miller

A note from Jen: I detest Christmas music. As a Jewish kid, piped-in mall tunes were always a reminder that I couldn’t participate in what seemed like a far better holiday. As an adult, I hate the commercialism and the fact that they’re complete ear worms, designed to get stuck in your head. I do, however, love singing Christmas carols with other people, especially out walking around at night. You know, Christmas caroling. My favorite Christmas carol to sing is “Silent Night” because it’s beautiful and because I can play around with the harmonies. The recorded version I most love is Simon and Garfunkel’s, from the Parsley, Sage, Rosemary and Thyme album, which was played a lot in my house growing up (the album, not the song).

12. Michal’s pick: “All I Want for Christmas Is You” by Mariah Carey

14. Craig’s pick: any versions of holiday songs by Herb Alpert.

“The Christmas Song” by Herb Alpert & the Tijuana Brass

A note from Craig: “For the record, I loathe, I hate—did I mention I can’t stand—that ‘Drummer Boy’ song!”

“My Favorite Things” by Herb Alpert & the Tijuana Brass

A note from Kate: this album is soothing, warm; hot buttered rum in the form of sound.

Phil Spector’s A Christmas Gift for You:

A Charlie Brown Christmas by the Vince Guaraldi Trio:

“Step Into Christmas” by Elton John