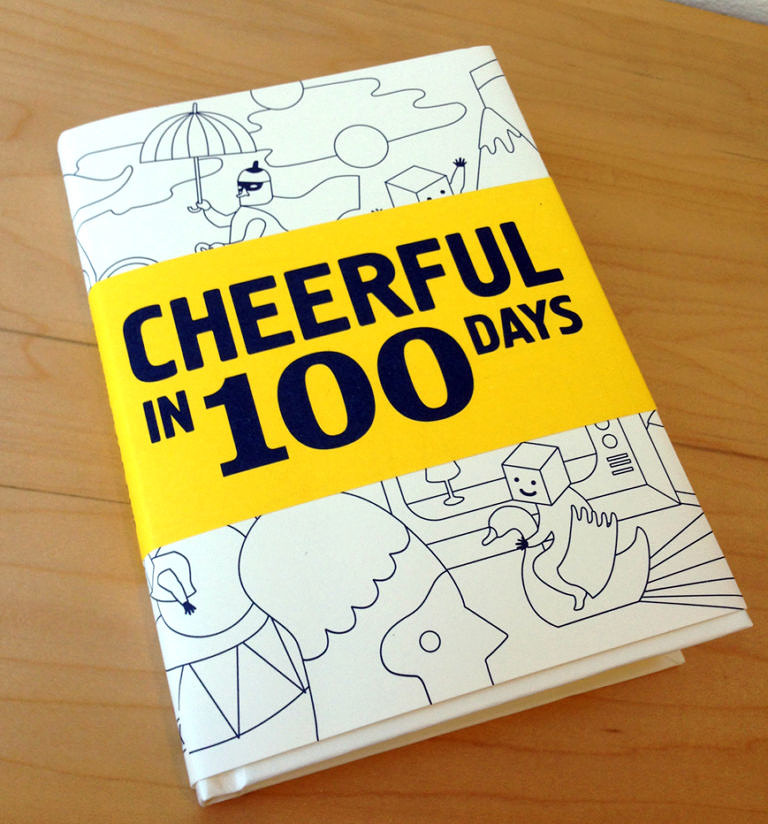 The “Cheerful in 100 Days” book, written by Gerard Janssen and published by Utigeverij Snor.

“Ask anyone what makes them happy and they will tell you—after first perhaps mentioning all the usual X-rated stuff—that it’s the little things that matter,” Gerard Janssen writes in his intro for Cheerful in 100 Days, originally titled Cheerful in 3 ½ Months.

Gerard wrote “Cheerful” under the small-in-size-but-mighty Dutch publishing house Uitgeverij Snor (“Snor publishers” in English), who Knock Knock has had the pleasure of working with for this English edition.

Gerard is a busy guy to put it lightly. He’s one-half of DJ duo the Easy Aloha’s (remember this catchy song?), and is currently researching for a TV documentary and his book on a Dutch quantum professor who’s creating a part for a quantum computer. Not to mention he’s in the midst of writing a novel and freelances for Dutch magazines. Whew . . . that’s multitasking-overload.

KNOCK KNOCK: The name “Snor” (“Mustache”) is from a Dutch proverb, “Dat zit wel snor,” translating into English as “If something is mustache, it’s alright.” What’s another favorite Dutch saying that you live by and how is it translated into English?

KNOCK KNOCK: What inspired you to write Cheerful in 100 Days (originally titled Cheerful in 31/2 Months? And what’s one of your favorite “tasks” from the book?

GERARD: Strangely enough, a book by Pema Chödrön inspired me. She wrote something like, “You should do things differently than you are used to.” If you usually get angry when people hurt you, don’t get angry the next time, but take a shower, or do something totally different. I kind of liked that idea and mixed it with some cheerful madness.

A task I like: Number 17. “If no one is watching, hop like a blackbird. But if people notice, act normal and walk like a starling, one foot at a time.” I now realize these are “old world” birds, but I think you get the idea.

KNOCK KNOCK: What are 3 things that made you feel cheerful today?

GERARD: My kids getting out of bed in time, answering your questions, and browsing the Cheerful book (to look for my favorite task). I haven’t done that in a while (not in the least because of the beautiful illustrations by Sue Doeksen).

KNOCK KNOCK: Your team values creativity and fun—and inspire others to lighten up as well. Do you have any relaxation tips for our readers that you’ve found handy in times of stress, maybe any enjoyable creative routines you do to decompress? Or, do you have any tips on how to conquer writer’s block that you use?

GERARD: Sometimes I go to a coffee place where I’ve never been before to work in a new environment. I also have a little studio in a building where sound-nerds work (they make the software they used for movies like Gravity and The Hobbit, to let an astronaut sound like an astronaut and to make a hobbit in a cave sound like a hobbit in a cave). I really enjoy the nerdy Seinfeld-like lunch conversations I have with them.

And I am a “structured procrastinator,” as in I value the things I do when I should be doing more important things. To keep the resulting stress under control, I practice Zen meditation and go to a gym a few times a week.

KNOCK KNOCK: If you could cook any dish for any fictional or real person, who would it be and what would you cook for him or her?

GERARD: I’d make an Indian curry for the hairy bikers who created The Hairy Bikers’ Great Curries cookbook. They seem to be nice guys and can probably teach me some new curry tricks.

KNOCK KNOCK: What’s your favorite Knock Knock product and why?

GERARD: The WTF Stamp. I can use it every day.

KNOCK KNOCK: Any hobbies outside of writing?

GERARD: My latest hobby is NSA-like social media analysis, but my hobbies vary each month.