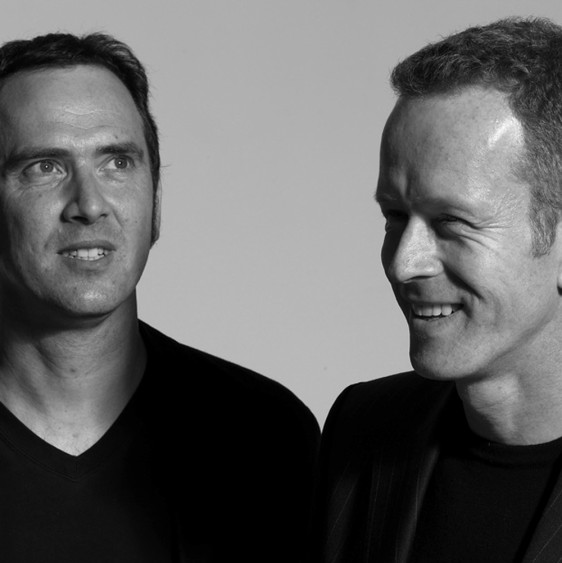 In spring 2011, designers Jim Sutherland and Gareth Howat gaped at the city of Cape Town from a helicopter tens of thousands of feet above South Africa’s mountainous coastline. The Hat-trick Design duo was in town for the annual Design Indaba Conference, and traveled from their UK studio to participate as speakers. During that helo ride, they met a fellow Indaba conference speaker and attendee—our head honcho, Jen Bilik—and like propellers, the creative sparks flew.

We teamed up with the award-winning design firm for our new book, Phobophobia, a grownup picture book that invites readers into a visual guessing game with clever images and typography. And since this is the first time we’ve ever partnered outside the US, our cup doubly runneth over with excitement!

Though we can imagine how very long their to-do lists are, the Hat-trick guys carved out some time to let us pick their mind.

1. Did you always want to be a designer? How did you get started?

Jim: I studied math and physics at school, but always liked drawing. I went to art school to do illustration, but when I got there, everyone was better at drawing than me. I looked around and saw people doing design, and it looked easier.

Gareth: Originally, I wanted to be an architect. I got a place at university to do the course, but changed my mind at the last minute. It’s a seven-year course and the big thing is it takes so long to actually see any real work appearing, so I decided to do a foundation course, which led me to graphics in the end.

2. How did your collaboration come about? And where does the name “Hat-trick” come from?

Jim: Originally, three of us set it up, hence the name. We had all worked together at another London company after leaving college.

Gareth: Choosing a name was one of the hardest things we’ve done. It took us longer to come up with the name than anything else.

3. This question is a two-parter. Your work spans such an array of sectors—from designing Olympic-themed stamps for the Royal Mail to crafting the ad campaign for Action on Hearing Loss, so:

a. Where does your design inspiration come from and how do you apply it to all the different stuff you work on?

Jim: We are really keen to work on all different types of projects across all sectors. It keeps us fresh and is much more interesting. I get inspired by so many things around me—books, films, exhibitions, anything really. From Jacques Tati and Tom Waits to Bruno Munari and Alan Fletcher, etc.

Gareth:  Like fashion designer Paul Smith says, “Inspiration can come from anywhere.” There is so much work out there now and it’s so easily available. One idea is to have your own “filter” to pick out the work you like and use it to spark new ideas.

b. Do you have any special organizational routines to keep the creativity flowing—or simply to help retain sanity?

Jim: We work a lot together. We put all the ideas on a big metal wall and discuss them, since the best ideas come from talking the problem over. We also put aside an afternoon every week to do research and experimentation. This is where “Phobophobia” came from originally. I constantly scribble notes and lists of ideas in notebooks.

Gareth: No, that’s why we are actually insane. In reality, we are quite an organised company so that we work pretty quickly. But we don’t follow any really rigid ways of doing things, it just comes from experience.

3. What sparked the idea for Phobophobia?

Jim and Gareth: We had been working on several projects that were word and language based. Once we started finding out these amazing words for phobias we started visualising  them and bringing them to life.

Jim: As the introduction of Phobophobia states, I’m scared of lots of things. Mainly spiders, but also cows and dancing. I think it’s fascinating what fears we hold inside.

Gareth: Being bored, and spiders, I really hate spiders. There is something inherently evil about them.

5. What are your hobbies outside of designing?

Jim: I love designing and don’t really treat it as a job. I spend a lot of my spare time thinking of new projects I could be doing. It’s not a proper job.

Gareth: Tennis, running, and outdoor stuff. We spend so much time at work, so it’s good to be active and not indoors.

6. As you know, there are numerous phrases in the US language that mean something completely different in Britain. What’s your favorite American slang word or phrase, and what’s the equivalent in British vernacular? Or, if you don’t have a favorite, what American phrase irks you the most and why?

Jim: I want to find out more about the difference between American and English spellings. For instance, why does ‘color’ have no ‘u’? Who decided to do that?

Gareth: It has to be “pants”—that really makes me laugh every time I hear it in the States.

7. What’s your favorite Knock Knock product and why?

Jim: I love the Clump-o-Lumps. It’s a genius idea and I am very happy we have some.

Gareth: The Complete Manual of Things that Might Kill You: A Guide to Self-Diagnosis for Hypochondriacs. It really resonates with me, as I am one! It’s very dark but very funny.

8. You started Hat-trick nearly 12 years ago. What do you see yourself doing 12 years from now?

Jim: I hope I’m still doing this. I feel like I’m running out of time so I’m speeding up.

Gareth: I can’t believe it’s gone by so quickly—that’s a good sign. Probably more of the same, if we can keep up the energy. I can’t imagine doing anything else.