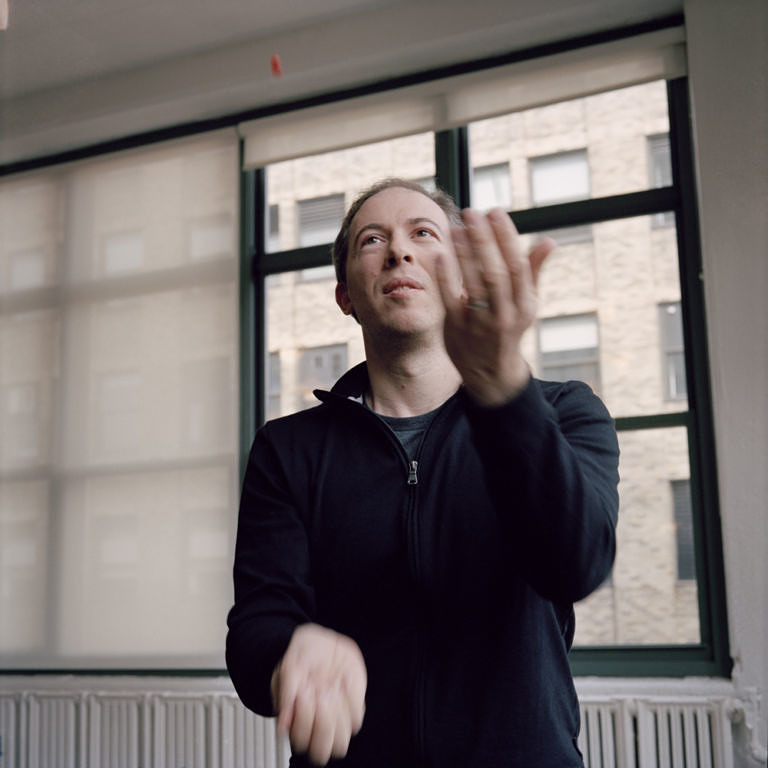 As a New York City advertising creative director, Huffington Post contributor, and writer of not one, not two, but three different blogs, Marc Hartzman doesn’t just wear different hats. One of his talents, outside of writing, makes him capable of literally juggling hats.

In between his blogs, which range from a satirical look at things that “blow our minds” nowadays to a collection of stereoview photos he photographed himself, Marc’s also completing his first historical novel, covering 300 years of history and features a motley collection of characters, including surgeon John Hunter, the Elephant Man, phrenologists, and many more. Whew. So we’re not exactly sure how he found time to author The Anti-Social Network Journal, but this paper haven gives us a break from our never-ending social feeds and refreshes our oh-so-cluttered mind. We think it can help soothe your scrolling addiction as well.

1. What inspired you to write The Anti-Social Network Journal? Social media is very addicting, but what are we really doing there? I catch myself scrolling through my news feed looking at about 90% of posts I couldn’t care less about. So many things are shared that just don’t need to be shared. As I’m scrolling mindlessly, I eventually realize it, get frustrated, and remind myself that I could be doing something more productive.

Don’t get me wrong, social media has its benefits. There are times I’m happy to see what friends are doing, it’s great to make connections, and there are certainly times when people share something of real interest. Plus, instant gratification can be nice. But those moments are cluttered with nonsense, marketing, memes, and sensationalistic click bait. Aside from the constant flow of content, I’m disturbed by what it’s doing to the English language. Particularly Twitter. Texting is bad enough for language, but Twitter is really destroying it as people cram what they can into 140 characters. It results in poor language and crunched-down words to accommodate the space. There’s just no respect for spelling or sentences. I find that sad.

2. In the journal, you write “Something like 50% of people check Facebook right when they wake up. The rest of us start our day.” As part of the other 50%, how do you typically start your day? I get out of bed, brush my teeth, and take a shower. Then I get dressed, get the kids ready (which can be quite time consuming and often requires a silly song to get them out of bed), eat breakfast, feed our bearded dragon his veggies and crickets, and race to work. If time permits, I will check my email before leaving the house. If not, I can do it on the train. Then I work, write, or read on the ride into Grand Central Station. Following that I take two subways to get to my office and begin another day of work. Please contact me for further details.

3. You’re fan of curious characters, so much so that you wrote the book American Sideshow, and continued to write about them on one of your blogs, A Touch of Knowledge and for the Huffington Post. Who are the top three most bizarre characters that you’ve researched?

1. Vivian Wheeler. Vivian has the distinct honor of wearing the longest beard of any living woman. I first met her when I was writing about her for my book American Sideshow. We’ve stayed in touch over the years and I’ve written numerous articles about her for various publications. With each one I learn new fascinating details about her life. She’s been bearded since birth and been in sideshows since the age of 5. However, the most rewarding story was one I wrote for AOL Weird News several years ago about her finding her long-lost son after 30 years. I didn’t just write it—I was part of it. Her son had contacted me after discovering who his mother was and asked me to help him find Vivian. They eventually reunited after another sideshow performer, George the Giant, ran into Vivian at a park in Bakersfield, CA, where they were both living. The article got the attention of The Maury Show and Vivian, her son, and I all went on the show. A maternity test concluded Vivian was the mother.

2. Ronnie and Donnie Galyon. Ronnie and Donnie are the world’s oldest living conjoined twins, and recently surpassed Chang and Eng Bunker as the world’s oldest conjoined twins ever. This has been a longtime goal of theirs. They’re joined at the abdomen and essentially face each other every minute of the day. Like Vivian, I’ve included them on this list because an article I wrote had a larger effect than just being another story about conjoined twins. This story, again for AOL Weird News, was about a charity group’s efforts to build an addition to the twins’ brother’s house. The new home would be specifically designed for their unique needs and would allow the brother and his wife to take care of Ronnie and Donnie with much greater ease. But funds were running short. My story attracted attention and ended up helping the group raise funds, which helped them complete the project.

3. Le Pétomane. In the late 1800s and early 1900s, this man was the top attraction at the Moulin Rouge in Paris. His act? Farting. He was known as a fartiste. Le Pétomane, whose real name was Joseph Pujol, had the very unique ability to control his flatulence and fart on command and with spectacular style and dexterity. His shows involved numerous “impressions” created entirely by the passing of wind. Truly of one the most unusual performers I’ve written about.

4. You’re stuck on a desert island. What five book titles would you wish magically appeared on said island?

5. As an active professional writer for nearly two decades now, do you have any writing tips or writing words-of-wisdom to share with our readers? Write every idea down. Some may not work, but some will. Always keep writing. Like anything else, the more you do it, the better you get. When you’re not writing, read. It’s the other thing that’ll help your writing get better. Plus, the books you read may trigger ideas for the books you’ll write.

6. Any hobbies outside of writing and updating your blogs? I juggle and actually own a few world records with Record Holders Republic for juggling very small objects, like pumpkin seeds, jellybeans, and boiled peanuts. I also collect stereoview photos from the late 19th and early 20th century. Recently, I’ve been shooting my own stereoscopic images. The 3-D effect is really quite amazing.

7. What’s your favorite Knock Knock product and why (other than The Anti-Social Network Journal)? Inconsequential Dilemmas. I just love the book’s humor throughout—from the questions posed to the possible responses and actions to take. Very insightful, funny, and beautifully designed.

8. If you could cook a meal for any fictional or real person, who would it be and what would you cook for him or her? Brisket for Barnum. I think a conversation with P. T. Barnum would be incredibly interesting. Imagine the stories he’d have to tell about his struggles and triumphs touring the world with some of the most remarkable human anomalies who’ve ever lived. Tom Thumb, Siamese twins Chang and Eng Bunker, bearded ladies, giants, and so many more. I’d want this meeting to last as long as possible, and so I’d invite him over early, put the brisket in the oven, then wait hours and hours for it to cook, giving him a fair amount of time to talk. Plus, I love brisket. It’s delicious. But I’d prefer having my wife cook it because she’s much better and I’d hate to offend Barnum with my poor culinary skills.

Marc Hartzman is author of our Anti-Social Network Journal ($14) and contributing Knock Knock blog writer. Check out his hilarious posts here and enjoy his musings on how social networking has affected life as we know it—for better or worse! Follow him on Twitter at @marchartzman.