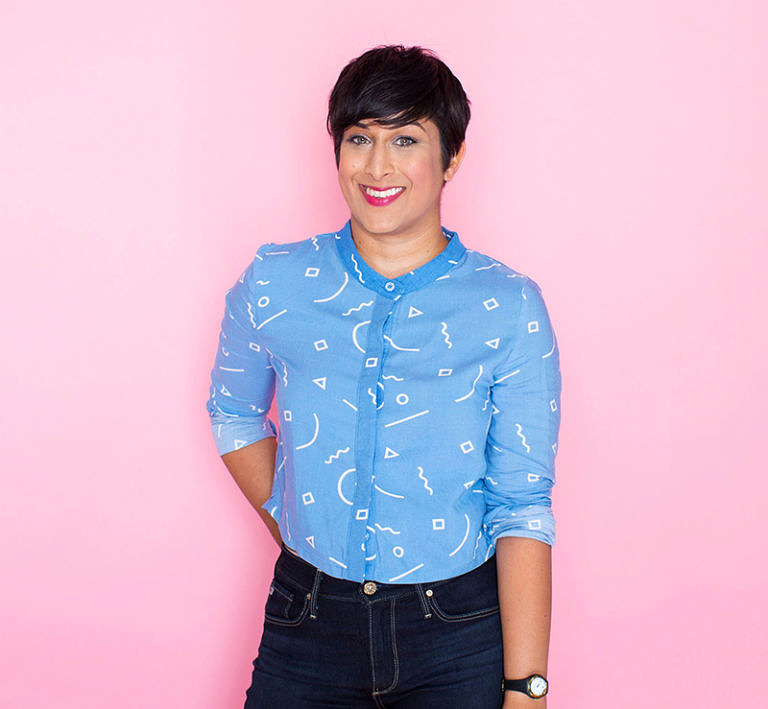 Do you share silly phrases with friends and family? Words that are so goofy and specific that it’s like you have your own unusual language? Well, it turns out that isn’t unusual at all! Illustrator and art director Rinee Shah created The Made-Up Words Project based on her popular project and website of the same name. It’s a collection of 100 unique and silly phrases crowd-sourced from real families around the globe—like sticking your cold feet under someone’s butt on the couch (“nurdeling”).

Shah hails from the vibrant city of San Francisco and earned her degree in Media Arts from the University of California, San Diego. Her animation work has played in film festivals around the country and has been prominently featured on Pitchfork, Stereogum and Fader Magazine (see list here), while The Made-Up Words Project garnered press attention from Huffington Post, BuzzFeed, Mashable, and Flavorwire.

Read more about Rinee—including how she came up with The Made-Up Words Project, her hobbies, and a certain need-to-know factoid—in this Q&A!

1. What are a few made-up words you have with your own family or friends? What are their meanings? This is a surprisingly tricky question for me. I know my family had quite a few growing up but the only one I can distinctly remember is “oingo boingo.” We always used that term for when you’re eating something really cheesy and there’s one small string of cheese that stretches out.

2. Where do you find inspiration for your own creative projects? Everywhere, really! Film and television are a pretty big influence, as well as certain fiction books that embrace a bit of mystical realism (the first one that comes to mind is Karen Russell’s Swamplandia.) Design blogs (FFFFOUND, The Fox is Black, Designspiration) and Pinterest also help with finding inspiration for type design and illustration.

3. How did you get into animation? What’s your favorite animation project that you’ve worked on? Tell us about it. My first job in San Francisco was at a post-production house that specialized in animation and commercial editing. They needed someone who could animate, so I had to learn on the job.

What I love most about animation is that the medium gives you so much freedom as a storyteller. That freedom really came into play when working on my favorite animation project—a music video for Benoit Pioulard’s “Woolgathering Exodus.” It was one of those songs I had listened to on repeat for weeks so it was really fun to create something for it.

4. Do you have any hobbies outside of designing, illustrating and art directing? Drinking coffee, watching movies, and walking around the city while listening to music/podcasts.

5. What is one random fact about you that no one necessarily knows? Close friends and colleagues know this about me, but a lot of people are surprised to find out that I’m a triplet.

6. You mention in your bio that you came up with idea for The Made-Up Words Project while watching “The West Wing.” Can you let us know what exactly happened? Last January, it was cold and miserable out. I decided to marathon The West Wing on Netflix, since I had never seen it. I can’t remember the exact episode, but everyone is at lunch and Rob Lowe’s character says a word and just gets puzzled looks from everyone else. He pauses and says that he JUST realized that it must be a word that his mother made-up. As I was watching that, I thought that exact experience must happen to people all the time and it got me thinking about starting a project that involved that.

7. You’ve created awesome music videos. What music artists, bands, or songs are you listening to nonstop right now? I’ve been listening to Leon Bridges and Father John Misty a lot lately. On a related note, I closely associate the band Sylvan Esso with The Made-Up Words Project. Their album was my non-stop soundtrack when I was working on the book.

8. If you could cook dinner for any fictional or non-fictional character, who would it be and why? What would you cook? First off, I’m a terrible cook so I hope everyone is okay with peanut butter sandwiches. I’m a big Seinfeld fan so I’d have to say Elaine Benes.

9. What’s your favorite Knock Knock product and why (not counting Made-Up Words)? I absolutely love Cheerful in 100 Days. The illustrations are just so good and the sense of humor is unexpected and quirky.

10. Any advice for aspiring creatives, animators, and illustrators out there? Make work that you think is funny and interesting and chances are it will resonate with ­other people too.

For more info on Rinee and her projects, check out her website, “follow” her on Twitter, and browse Seinfood—her illustration series about the food of Seinfeld.