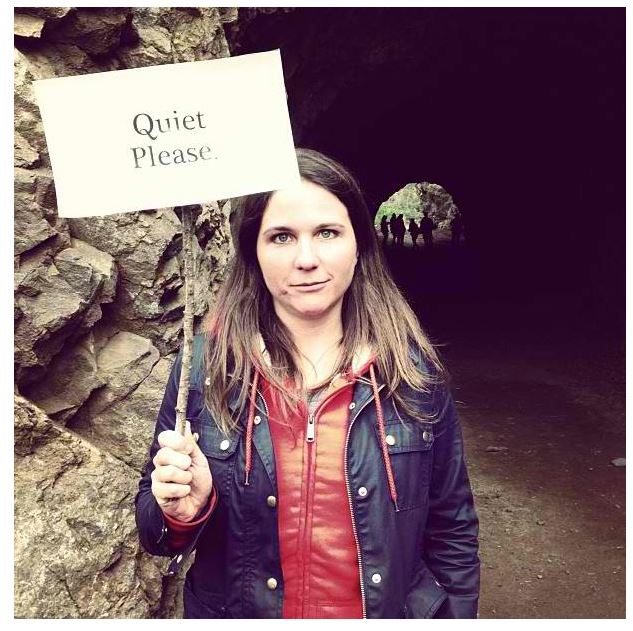 Suzi Barrett’s comedy will punch your funny bone, then buy the next round of drinks for everyone. After reading through our new Affirmators! cards, created and written by Suzi, you’ll completely understand.

Suzi’s a Renaissance woman. If you’re into entertainment of the hilarious kind, you’ve likely seen Suzi flip the bird at the Golden State’s beauty in her viral Funny or Die series “I Hate California.” Or, you may have leafed through her 50 Shades of Gray coffee table book. Us Los Angelenos have seen Suzi grace the Upright Citizen Brigade’s stage, where she teaches and performs. Her improv troupe, Sentimental Lady, riffs off an audience member’s guilty pleasure every Saturday night. When she’s not performing onstage, she’s on the silver screen. She’s appeared on “Drunk History,” “@Midnight,” “How I Met Your Mother,” and plays Kirby’s mom on on Disney XD’s show “Kirby Buckets.” She’s also written for “American’s Next Weatherman.”*

It’s no wonder Suzi drenched Affirmations! in both empowerment and hilarity—shaking off all the self-helpy-ness. She wanted to create daily cards that rethink New Age World-y decks, blending together positive affirmations, the mystique of medicine cards—and comedy, of course.

1. How did you get into comedy? Was this something you’ve always wanted to do as a career? I’ve wanted to be an actor since I was a little kid. In middle school, I started becoming the class clown—you know, because I needed a “thing” and I wasn’t good-looking or good at sports, which are basically the other two options in 6th grade. By high school I figured out that I wasn’t a naturally talented actor but I could always make people laugh. So . . . my career goal sort of organically evolved from something vague and improbable (“movie star”), to something vaguer and unmeasurable (“funny person”). I was obsessed with a lot of comedians who’d started as improvisers, so improv seemed like the logical jumping off point for me. Turns out I should have skipped the whole thing and become an overworked attorney with a pile of grad school debts. Just kidding. This was a good choice.

2. Favorite comedians right now? (Can be improvers or stand-up.) There are too many to name, but if I had to pick one of each: Rebecca Drysdale is my favorite improviser, and Bill Hicks is my all-time favorite stand-up.

3. Favorite Affirmators! card? Wonder. I love the illustration so much, and the text on the card is basically my motto in life.

4. Hobbies outside of work? Camping, hiking, cooking, DJing, gardening, geocaching, board games, making treasure hunts. And I play a mean game of basketball. (Mean to my team and the fans, because I’m not very good).

5. Your improv group, Sentimental Lady, plays off of audiences’ guilty pleasures. What’s the weirdest guilty pleasure you’ve heard? Oh man. There was this girl a couple of years ago whose guilty pleasure was going to Disneyland by herself. And not to ride the rides, but to eat the food. She said she sometimes just goes there just to have lunch. That’s an expensive, time-intensive corn dog.

6. This one’s two parts! A. What inspired you to create your “I Hate California” series? (Other than, California’s dumb beauty.) Is there a specific story to attribute to that? There is, actually. I used to work at a theatre in Amsterdam called Boom Chicago. It’s an improv and sketch theatre that hires American comedians, and you go over for a year or more and write and perform together full time. The cast becomes really tight-knit, and when anyone leaves to return to America they’re given a really big send-off, and all the other actors roast them as a last hurrah. Well, I had finished my stint there and moved to L.A., and I got word that a good friend of mine in the Boom cast was about to leave Boom and head to L.A. as well. The director emailed and said I could send in a roast video from L.A. that they’d play at O.T.’s going-away roast party.

So I sat down to come up with some roast jokes about him, and realized I had nothing. This guy is so wonderful and so well-behaved that there was nothing to even lovingly tease him about. So I decided to make a video roasting his decision to move to L.A.—making it sound like he was making the biggest mistake of his life. The joke being, of course, that L.A.’s great, and everything I’m making fun of is something either totally wonderful about L.A., or something annoying about living in Amsterdam. I posted it to his Facebook page as his little going away present, and two days later it was blowing up the Internet.

It was a very bizarre situation, because I’d spent years trying to make “viral” videos, and they all got, you know, like 4 views. There’s a great lesson in that, I think, which is just to make stuff for you and your friends without trying to get attention or trying to make something you think other people will like. Anyway. Years later, Funny or Die asked me if I’d want to make more videos in the same vein, and they paid for my travels so I could make the “I Hate California” series.

B. What do you “hate” most about California? Ugh. The goddamn never-ending display of abundant ecological variety. We get it, state. You have everything.

7. Any writing tips for fellow comedy writers? Yeah, just make stuff you like. Keep making it. Don’t worry about what anybody else is doing. Be grateful that you’re one of the few species that gets to create art intentionally (I say “one of” because there are animals like the bowerbird that are doing some great work out there). And watch Ira glass’s video on taste if you haven’t already.

8. What’s a random fact that no one necessarily knows about you? I love the musical “Chess.” (The songs, not the play. The play is a garbage parade.)

11. You’re in a cartoon movie. What’s cartoon Suzi’s animal sidekick and why? A narwhal on a pogo stick. Why not?