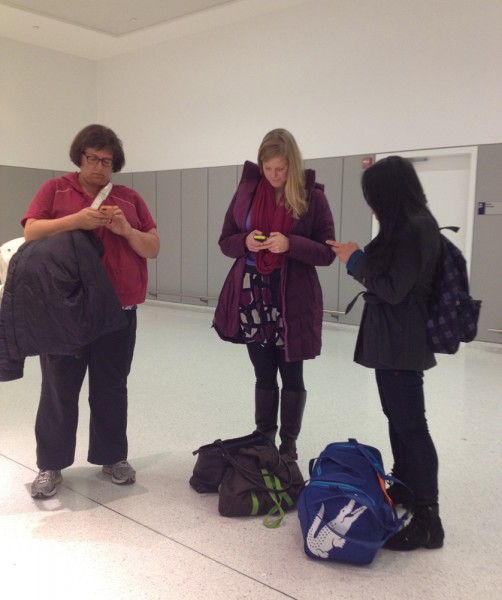 The Knock Knock digital team, minus Trish (who took the pic), waiting for bags at JFK airport. We do digital stuff like this. From left to right: Jen, our head honcho; Sara, our e-commerce manager, and Mel (me!), marketing and digital coordinator.

I’m currently watching the highly-acclaimed Olsen twins classic New York Minute while I write. It’s the only Olsen flick I have not seen, and by fantastic chance I DVRed it in the nick of time, which may or may not be one of the most embarrassing things I’ve chosen to share with the Internet. Nevertheless, it involves a young woman who’s determined to make it big in a city saturated with hustle and bustle and Simple Plan cameos. One of those two plot points is completely relatable to my current, post-college pursuits.

At the tail end of January, I had the opportunity to travel with the Knock Knock team to New York City, which I consider an extraordinary accolade, considering: 1. If thought bubbles hovered over our heads in the office and labeled us, mine would read, “Mildly mellow chick, semi-decent fashion sense, junior status”; 2. New York is way over there, literally on the other side of the country from our Venice, California, locale, and plane rides ain’t cheap these days. So when my colleague and Knock Knock e-commerce manager, Sara Hartman, sent me an email asking if I’d like to come to NYC for digital department meetings and the New York International Gift Fair, that was an immediate “Uh, hells yessssss!” And while prepping for the trip, I made sure to revisit my inner “how to not fuck things up” canon.

So there I was, 37,292 feet in the air, working on Knock Knock social media, PR, and video items from above and exchanging interplane emails with the boss ladies—Trish, our VP of branding, and our head honcho, Jen, have you heard of her?—and Knock Knockers back in Venice. All the while scheming up ways Sara and I could somehow sneak into first class and make Chris Pine fall in love with us, although I kindly gave Sara dibs. (Yes, the actor really was on our flight and newsflash, he reads newspapers! Whoa, guys, it’s like he’s a real person!)

It all felt so very odd to me—like, taking-off-my-boots-and-putting-heels-on odd. Why did I feel so weird working? I had no idea. I’ve been on flights where I was perfectly sandwiched between two coworkers chatting it up about plans and “next steps,” but didn’t think I’d be doing the same exact thing at the tender age of twenty-three. I was out of my element. (If you wanted to know, my “element” is falling asleep to my iPod and spontaneously waking up to make sure I didn’t miss the food cart.) But damn, did I feel productive! And so my fingers returned to my keyboard.

The four-day trip itself flew by at the same fast, fervent rhythm of New Yorkers’ feet pounding on the concrete. We weaved in and out of digital meetings the first two days. In and out of the freezing 19-degree chill that made my breath look as if I was smoking my lungs out, sans cigarettes. Surprisingly we had a few spurts of free time, which Sara and I used to walk around a snow-blanketed Central Park and visit the beloved Museum of Modern Art (MoMA).

At night, the Knock Knock digital ladies also had spurts of alcoholic beverages that made walking outside a bit warmer, our team a bit closer, and our list of bad pickup lines you should never, ever say to a gal that much longer. For pete’s sake, guys, do not try to woo women from Los Angeles by saying that you “expected them to be more beautiful” and then proceed to call it “witty banter.” In the real world, this is actually considered an insult, and you will be branded an “asshole” with inept social skills.

Sunday came around, the first day of the fair at the Javits Center. Unlike Ms. Jen, who has a decade of trade shows under her belt, I’ve never been to a trade show in my life. I’ve heard so much about the show over the last few years from the reports I’ve received to post about on Facebook, but that was the extent of it. My plan was to live-Tweet and -Facebook the experience, but when I got inside the Javits I realized I didn’t have Wi-Fi for the designated Knock Knock social media iPod Touch, which meant I was pretty much screwed out of that scheme.

The upshot? For those of you who have never experienced a trade show as grand as NYIGF, go to at least one or two in your life. By the end of it, you’ll want to hug and high-five each and every member of your sales team and cater to their every need, because the logistics of it all are exhausting. Our superstar sales team not only set up the booth, which, by the way, looked über-fantastic, but spent the entire week on their feet with huge smiles on their faces, taking time to talk to each and every person who stopped by. For an ENTIRE WEEK. I was at the Knock Knock booth for less than an hour and within fifteen minutes I knew I couldn’t do what they do so seamlessly. A supreme shout-out to them (and to our Tradeshow Jots, which were freebies just for the show, and very, very popular)!

I also had the opportunity to walk the rest of the aisles and aisles and aisles of booths. Walking the convention center, spanning two huge floors, made my brain spin, but in a good way. I tried as best as I could to keep up with Trish and Jen’s strides but I easily became overwhelmed with the thousands and thousands of brands and companies—both big and small—and the tens of thousands of products with which they’d stocked their booths. Not to mention the tens and thousands of people running around trying to sell and buy all of it—oy, I had to sit down and take a breather and reflect upon the fact that this craziness happens twice a year. After the this experience, I was thinking of submitting “trade show” to UrbanDictionary.com, alongside the definition, “embraced ridiculousness.” There are just so many items with which to become fixated, it would take weeks for you to sift through them all. Although it would take me months, because I shop like a snail.

To close the day, and the trip, the Knock Knock team attended the Gift for Life AIDS charity gala and auction, which is probably the swankiest event I’ve ever been to. Hanging out, drinking, and catching up with other Knock Knockers outside of the office was oh-so-refreshing and extremely fun. If you didn’t see the photo-booth snaps from the event, check them out, because it really does capture our inebriation. On a side note to other twentysomethings: if you go to a future event with your management team and there’s an open bar, sip with caution. I know it’s tempting, but do not, I repeat, do not, take advantage of it to the point where you’re doing power-hour shots or anything of the like, because getting blackout drunk in front of your execs is utterly moronic, but more importantly, unprofessional.

Once again I worked on the plane ride home. As I pushed pixels, that funny, fickle feeling crept over me again, that feeling of sudden assimilation into unknown territory. Not to sound too cheesy or stupidly soft, but I realized that “unknown territory” was confidence. Finding confidence in my own work efforts and ethic in this bachelor’s-degree afterlife. Here I was, hunched over and editing a video for four hours on an airplane, not because I was required to, but because I wanted to, and I actually felt I had a purpose within my own career pursuits. And by flying me across the nation, I realized I felt comfort in knowing my company thought I did, too.

For more pics from the New York trip, and let me tell you, there are many more, check out our FB album all about it!