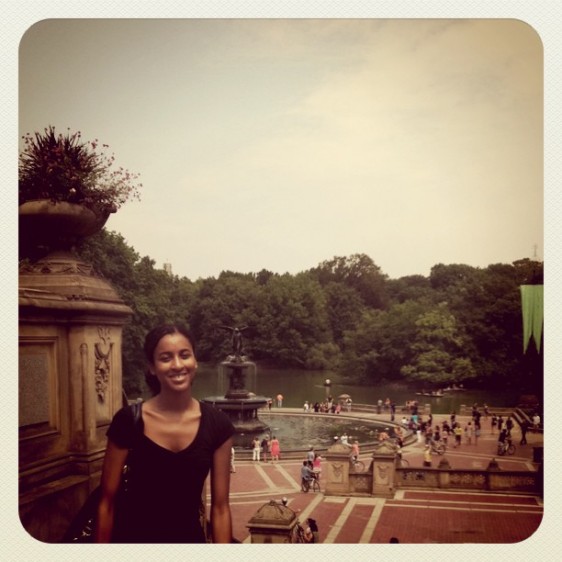 Me in front of the Bethesda Fountain in Central Park. Beautiful!

Michal Broomfield (beautifully pronounced “mcHAIL”) is one of our customer service specialists. In fact, you just might be lucky enough to talk to her if you have questions about your order! She’d like to show-and-tell about her recent trip to NYC. Go Michal!

I just returned from my trip to the New York International Gift Fair, which was filled with many firsts for me. It was my first tradeshow, my first trip to New York, and my first business trip ever—the word exciting doesn’t even begin to describe this wonderful experience! Between the mafia stories, the amazing selection of knockoff bags, and the overall go-getter mentality that the city puts you in, my trip was everything I could have hoped for and then some!

I started my experience with a full day of sightseeing, which took me to the top spots in the city: Central Park, New York University, Ground Zero, Chinatown, Battery Park, Wall Street, Bowling Green Park, Malcolm X Boulevard in Harlem, and the Time Warner Center in Columbus Circle. I quickly realized that the parks are where I would want to spend a lot of my free time. They are truly amazing, and the green from the trees mixed with the backdrop of the New York skyline is almost poetic! It’s pretty overwhelming once you realize how much there is to see. However, I found that the best way to find things would be to ask the locals. Cab drivers, bellmen, store clerks, and street performers became my tour guides throughout the great city.

It was fun to play on my first day, but let’s not forget the reason why I was there—the show! Two days were dedicated to show setup, which went by pretty quickly. It’s amazing to see a huge convention center like the Javits Center go from boxes and forklifts to lights . . . catalogs . . . and action! When the show opened, we were ready to sell, sell, sell! This tradeshow was a very important one for me, as it was my first opportunity to reach out to our retailers and speak to them face-to-face instead of via phone or email—something that added a personal touch to the outreach that we are able to do from the office. I also had the opportunity to meet and work with the hardworking sales reps that help distribute the Knock Knock line every day, which was a great experience, especially since some of them live on the East Coast and were able to give me advice on making my way through New York’s main attractions.

The show lasted for five days and I feel we all did a wonderful job of promoting to new and existing customers. Many laughs were had in our corner booth by customers who found our products not just funny, but hilarious! Finally, we wrapped up the show on the last day, but not before being questioned multiple times by other exhibitors who were longing to gain some free Knock Knock “swag,” as Randy, our national sales manager, called it.

The end of my trip landed me in New Brunswick, New Jersey, and in North Philly, where a good friend of mine and her extended family live. It was very interesting to see what a huge difference there is between Manhattan—the bustling city—and New Brunswick, a very green, almost countrylike town.

I felt like a real New Yorker by the end of my stay—from riding the subway and hailing my very own cab to hustling to get the best deals on my knockoff bags. I hate to toot my own horn, but I could be considered a professional at this point! Ultimately I had a great time and hope to visit again in the near future.