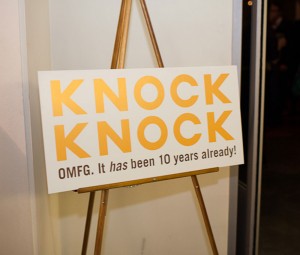 Do you, any of you, have social anxiety? That weird thing that makes you dread something that’s supposed to be a great time, even though you know intellectually you’ll probably have fun and forget about yourself once the shindig actually starts? The perverse instinct to cancel and run and hide with some ice cream and TV even though everybody thinks you’re outgoing?

That’s what I had going into the ten-year-anniversary party. Not to mention that it was a hell of a lot of work to put on. As someone who’s never planned a wedding (bridesmaid five times, though, thank you very much), I really had no idea. It’s a party. In a space. With people and food and drinks and decorations. What, Trish? What’s that you say? You think we need a party planner? Pshaw.

Trish was right. (She usually is.) It was such a big project that, as the day approached, I was not only dreading it irrationally and agoraphobically, I and the party team quite understandably couldn’t wait for the post-work relief that would set in once the heavy lifting was over.

But you know what?

IT WAS A MAGICAL NIGHT.

Social anxiety be gone. Work be worth it. People be incredible. Evening be beautiful. Triumph be palpable. Party be rock star.

In general, gratitude—at least the self-help modality version of it—bugs the shit out of me. “Blessings,” people say. “In gratitude.” Yeah? I mock your Prius bull-hockey with my namaste hands. So imagine my surprise when I noticed myself feeling GRATEFUL. Tear-in-the-eye grateful. Non-mocking-namaste-hands grateful. Therapist-would-be-proud-of-me grateful. Pocket-full-of-sixpence grateful.

Because of this, right now, for one time and one time only, I’m going to do what I’d vowed never to do—make a gratitude list. The kind that Oprah says will make me a better person if I do it every day. But that’s not why I’m doing it—I’m doing it because I really, truly, and uncharacteristically want to count my and Knock Knock’s blessings. And I’m going to make it eleven just for the hell of it, and because ten years is actually sort of eleven years when you count them on your hands.

See you at the twenty-year-anniversary party!

P.S. Even though the postscript is dead, I do feel it’s important to let you know that I am aware I only got up to 2007 in my year-by-year narration of Knock Knock’s history. That’s six posts out of the eleven required, a majority. I do still plan to finish this project, and who knows, maybe I’ll make a book out of it, and it will come with a CD of music to slit your wrists by—like Mazzy Star. And a book isn’t too far off—it turns out that the median length for all books is 64,000 words, and I’ve already written (not including this post) 29,138. Because, as we’ve said from the very beginning, why use fewer words when you could use more?