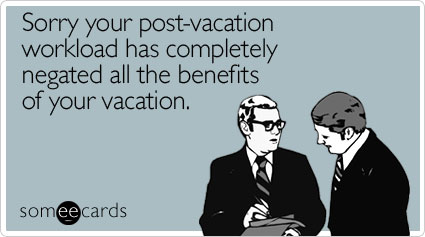 It’s pretty telling (but hopefully not for all of 2012) that my monthly Head Honcho Hello is late. I had such plans for productivity over what seemed like an endless work break, from Christmas Eve to January 3. Of course, me being me, part of the thrill was being able to cross some things off my work to-do list. It’s sad, really, how much satisfaction I get out of doing that in my supposed off-time—until I don’t.

And I thought I’d be getting all these things done while I followed through on my “vacation” plans, which included no fewer than eight days spent with visiting family (fortunately, I like these particular relatives). I’m always advising people not to overpromise and underdeliver, yet time and again, and most especially with myself, that’s what I do.

What am I thinking to create a daily to-do list (yes, I divy everything up onto particular days) that (a) would take a good 18 hours to execute fully; and (b) doesn’t account for any interruptions, meetings, or potty breaks? I’ve gotten much better at managing the delays back to the people who are expecting things from me, but I could still use some work in that area.

When I talk about this at work, the people to whom I’m delivering something (repeatedly) late often say, “Oh, it’s okay—you have so much on your plate!” This is true. But having a lot on your plate doesn’t mean you can’t realistically assess what you have on your plate, managing expectations and deadlines as you go. I feel especially guilty because I feel I’m supposed to be setting an example. How can I ask others to do things if I don’t do them myself?

Oddly, there’s such optimism among those of us who overpromise and underdeliver—we so want to get it done that way, in that timeframe! But being unrealistic benefits no one and puts the entire team in a constant state of fire-drill mode. Craig and Trish and Jim and Carolyn are great at being more realistic in plotting out project schedules. You should see our master product development schedule—it’s got some 200 projects on it at any given time. Believe me—I am so not the one to make those trains run on time.

But there’s a role for the overoptimistic Jen Biliks of this world, too. Sometimes things need to be goosed to run a little quicker. Sometimes the more cautious among us need to be pushed to produce faster and better than they ever thought possible. I once saw a Craigslist ad that said simply, “Visionary seeks functionary.” Craig and Trish and Jim certainly have both visionary and functionary qualities, but I’m definitely the one who says “We can do it! We can so finish that book in two weeks! We can so release that thing a season early! We can so add to the product list! We can so introduce a new product line! We can so implement a new server file-naming protocol.” And to their credit, except when they convince me it’s a really bad idea and will screw up too many other things we’ve got going, they always make it happen.

I think you’ll see what seems like more of the eyes-bigger-than-stomach Jen Bilik than the sane and rational others at Knock Knock this year. Our Spring 2012 (to launch on the website in early February!) and Fall 2012 releases kick some serious ass with their breadth and depth. Not to mention a top-secret entirely new thing you’ll be hearing more about very soon. But just because it looks like we would have had to be out of our minds to take all this on doesn’t mean, in this case, that it was a case of the crazy lady pushing everybody ragged. Nope—this was a team effort, a team commitment, and it will be a team success.

Rest assured, however, that I will soon be pushing everybody to do something else that seems, on the face of it, patently undoable, because, much as I continually try to improve, this overoptimistic, overpromise-and-underdeliver leopard isn’t changing her spots anytime soon.