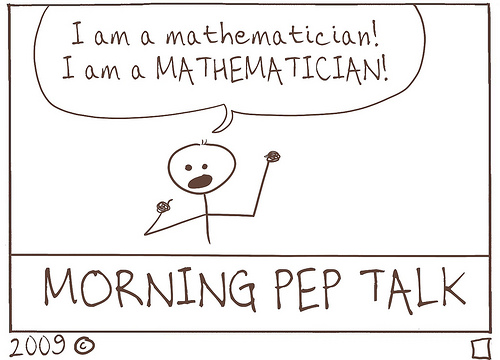 This isn’t the type of pep talk we hoped for.

Whether or not your weekend went wrong, you have a “case of the Mondays,” or just really regret having taken that last shot of Jägermeister on Sunday night, we could all use a good pep talk—or know someone who’s in need of one.

While our Pep Talk Nifty Note and Pep Talks & Picker-Uppers for All Occasions are quick fixes for much-needed uplift, we look to today’s Google Roulette Monday for virtual good vibrations.

The very first image is a hand-drawn cartoon from what seems to be an on-hiatus blog focused on drawing mathematics-related cartoons “inspired by Sharpie fumes.” While we appreciate the drawing’s simplicity, doing math and sniffing Sharpies does not sound appealing for any time of day (actually, we take that back; apparently Jen likes math and particularly loves sniffing Sharpies).

The best amusement we found (scrolling past gems like this and this), however, was a picture of Saturday Night Live character Stuart Smalley—ah, the rejuvenation and nostalgia! Just reflecting back on “Daily Affirmations with Stuart Smalley” made us instantly feel good enough, smart enough, and well liked by actual people. Frail though he may be under that awful blond wig, we sometimes wish that we had Stuart’s positive mindset—at least to take us as far as hump day.