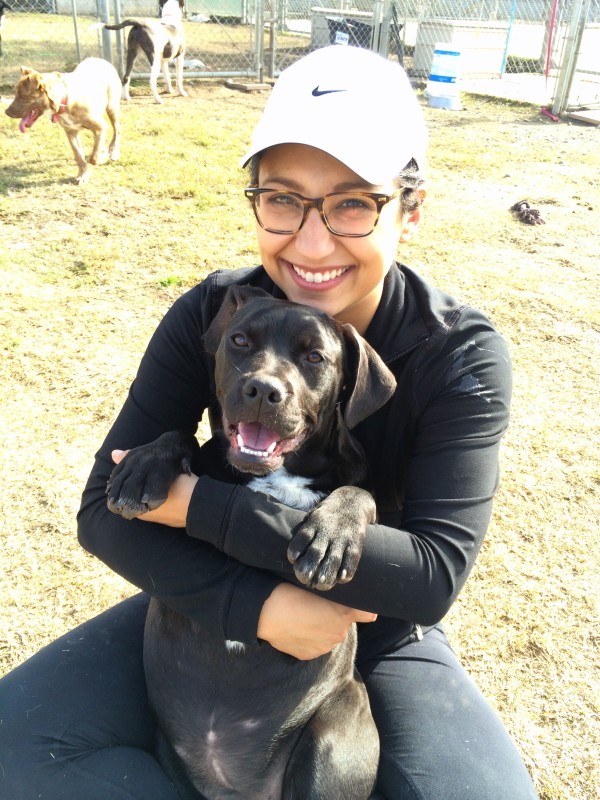 Remi getting some snuggles from Crystal S. at the Animal Compassion Team Headquarters.

October is Adopt-a-Dog Month and we’ve been celebrating pups all month long, including hosting our special LICK or Treat Giveaway (which you can still enter!). Now it’s time to spotlight some of Knock Knock fans’ furry friends! Whether adopted from a shelter or rescued from the streets, every animal deserves a place to call home and these precious pups have finally found their own stomping grounds. Meet the cuddly canines below!

1. Molly (pictured above) and Sherlock, dog parent: Casey C. These two pups were both adopted from Los Angeles Animal Services. “When I first rescued her, she was extremely afraid of people and other dogs and even being on a leash. She now loves going on walks and meeting new dogs, so it’s nice to see how far she has come,” Casey said.

Scooter has handicapable legs and back, but that doesn’t stop his energy! “The first time we took Scooter to the beach, he went wild with excitement—running up and down the shoreline and barking the whole time,” Kaitlyn said.

3. Wallace, dog parent: Sara W. Wallace, a Labrador, was rescued from an owner who was giving him away because the breeder said he wasn’t a “pure Lab.” “He’s great at playing catch–I say catch because he will jump so high to catch a tennis ball, but isn’t interested in fetching,” Sara said.

4. Louise, dog parent: Angela D. This 4-year-old Pekingese/German Shepherd mix was born in a trailer park in West Virginia, and then adopted from a shelter in Pennsylvania.

5. Rue, dog parents: Clare C. and Steve C. This 2-year-old Catahoula mix loves playing ball but is very cautious if it rolls near anything unfamiliar. She’ll freeze mid-chase, wait to see where it lands, and then very cautiously proceed to retrieve it. She’s also not a fan of swimming, despite her webbed toes. “If you coax her into water too deep to stand, she’ll beeline it back to shore. However, if she spots a leaf floating down the creek, all bets are off,” Steve said.

6. Remi, dog parent: Crystal S. (both pictured above). Remi is a 1-year-old Bull Mastiff/Pocket Pittie mix adopted from the Animal Compassion Team by Crystal S. and her husband. She is one of the sweetest, goofiest dogs they’ve ever met and gets along great with their other rescue dog, Zelda.

7. Hank, dog parent: Elizabeth C. Hank was a 9-year-old yellow Labrador/Blood Hound mix adopted from the Seattle Humane Society. Sadly, Hank passed away on October 1, 2015, but he lived a happy life and will be remembered. Everyone in the neighborhood knew and loved Hank and he was great with kids. “Hank loved going to the ocean. Even though he was older and didn’t move as fast with his arthritis, he was so excited to be there. I swear he would [bark and say] ‘Mom! We’re at the ocean! I’m so happy to be here’,” Elizabeth said.

8. Ziggy and Luna, dog parent: Jenna P. Ziggy is a 6-year-old Terrier mix and world traveler. He was adopted from one of Jenna’s friends, who used to sail down the Pacific Coast, in and out of harbors from Baja, CA to El Salvador. “He is tenacious, loyal, and loving, and except for crocodiles, he is fearless,” Jenna said.

Luna is an 8-year-old Lab/Terrier mix rescued from the streets of City Terrace, CA. “Her head was in a plastic bag where she’d been trying to scrounge a snack [and was] covered in a thousand seed ticks, and dirty, but had a beautiful, sweet smile,” Jenna said.

She made herself at home right away. “When I introduced her to my other dog and two cats, she (much, much larger than they) laid down, and wagged her tail and waited for them to approach her. It was a perfect match.”

9. Stella, dog parent: Jennifer L. Stella, who does not like brooms, vacuums, hockey sticks, or shovels—and will attack them and bark like crazy if any are brought out, is a real sweetheart. “Stella saved me from an abusive relationship—she opened my eyes and showed me what true love really is. Anyone that meets her and gets to know her, knows of her ‘powers.’ She is one of the kindest dogs I have ever met,” Jennifer said. She’s truly a special and loyal dog!

10. JJ and Gonzo, dog parent: John G. JJ is a 6-year-old miniature pinscher adopted from a litter in Inglewood. He loves sleeping under the covers and he always finds the warmest, softest place to take naps. “The first night we got him, we tried to put him in a crate, but he cried, so I slept next to him all night with my arm around him,” John said.

Gonzo is a 4-year-old Pomeranian/Terrier mix adopted from a rescue organization that found his mother and five siblings abandoned in Orange County. He loves playing fetch in the house with the same red rubber toy—which they call “Chewy.” Despite his age, everyone thinks Gonzo is still a puppy.

11. Olive, dog parent: Sandra K. Olive met Sandra K. while in a wire pen at a pet adoption near Larchmont Farmers Market in Los Angeles. Olive loves to dig (especially at the beach), sprint for tennis balls, and thinks both popcorn and string cheese are delicious.

Adopt-a-Dog Month is almost over, but there’s still time to celebrate! Be sure to enter our LICK or Treat Giveaway to win a copy of our new LICK book by Ty Foster. Also, check out all the LICK posts, pups, and more on our #LickBook Tagboard.

Have a dog adoption story you’d love to share? Tell us in the comments section!