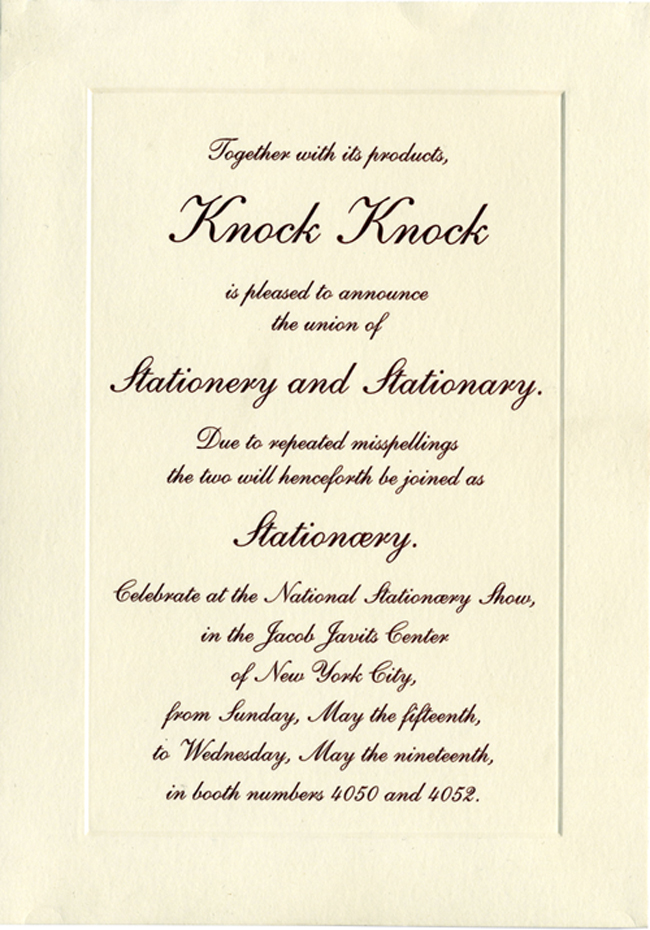 The only wedding invitation I've ever created for myself. Sad, really—but funny (a distinctive combo that defines me like a personal scent).

I’m embarrassed to say that in my original manifesto for Knock Knock (yes, there is one, handbound in a way that today makes me cringe—so 1990s amateur bookbinding, not that such a description would ring a bell for most people) I misspelled “stationery.” Craig Hetzer, our chief creative officer, identified and teased me about this past pecadillo when he read the manifesto. If you’ll remember, in his “In It for the Money” post, he described a company-wide email he wrote when he was at Chronicle Books to explain the difference between the two.

stationery: the paper stuff you write on and dawdle in sending to your grandmother

Now, can you imagine wanting to characterize your beloved industry and paper fetish as still, unmoving, stagnant no less?

After my (oh, I still cringe to think of it) manifesto error, it seems I quickly got on the bandwagon of orthographic rectitude, because for our second National Stationery Show,* in 2004, I got the idea to create a Knock Knock-is-coming-to-the-show announcement announcing a marriage between “stationery” and “stationary” due to frequent misspellings. We’ve scanned it here for your spelling pleasure.

Here’s another tough pill to swallow. In business and in SEO/SEM searching, many times decisions have to be about what works, not about what’s right (I mean that purely in functional terms, not in moral terms—morally I still occasionally feel that it’s important to do right). Here’s what I mean: in our website‘s Google Analytics reporting (which tells us all about traffic, etc., to a degree of granularity that will blow your mind), among the top 100 search terms used to find Knock Knock’s site, “cool stationary” ranks #5; “knock knock stationary” ranks #18; “unique stationary” ranks #23; and “funny stationary” ranks #75. The correct spelling? It appears only twice in the top 100: #57 is “cool stationery” and #95 is “knock knock stationery.”

At first I was opposed to optimizing our site for these misspellings, never mind funding pay-per-click ads that promulgated such blasphemy. But then I was talked down from my ledge of righteousness by our SEO consultant at the time. Which was more important to me? A crusade for better spelling or a crusade for better selling? I was forced to admit that in this instance, I could go for the latter. Just one of many progressive sell-outs that being a businessperson entails, but admittedly one of the lesser ones.

So now we optimize and market online for the misspelling. Hopefully this post, along with the other annoying-to-my-social-media-friends campaigns I’ve waged (to the point where people are afraid to email me, concerned that I’ll spot all their errors—which I will, of course, but I won’t judge them [mostly] and I do make my own, I promise), will be one step toward compensating for this online lassitude.

*For those of us who are disinclined to enjoy exercise, perhaps we should create a National Stationary Show. It would certainly avail us of mistaken Internet searches for the National Stationery Show.