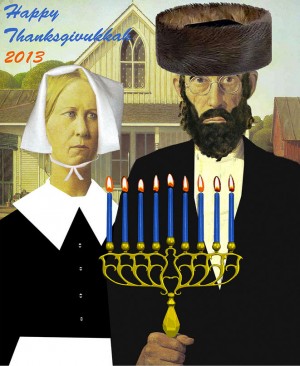 Thanksgivukkah art, courtesy of its popularizers.

This last Thursday, as you no doubt already know, constituted the only Thanksgiving for quite a while in which the holiday coincided with Chanukah. Here’s the Wikipedia lowdown:

Thanksgivukkah is a portmanteau neologism given to the convergence of the American holiday of Thanksgiving and the first day of the Jewish holiday of Hanukkah on Thursday, November 28, 2013. It was the result of a rare coincidence between the lunisolar Hebrew calendar (whose dates reflect both the moon phase and the time of the solar year, and which can have between 353 and 385 days per year) and the Gregorian calendar. Because the calendars are not calculated the same way, Hanukkah appears at a different time each year on the Gregorian calendar.

The term “Thanksgivukkah” was trademarked by a Boston-area resident who, along with her sister-in-law, created a Facebook page and a Twitter account devoted to the phenomenon. Boston Magazine reported that the once-in-a-lifetime concept was embraced around the U.S.

It’s suitably rare as to be noticeable:

As can be verified on any calendar conversion site, between the years 2014 and 2640, the first day of Hanukkah will fall in November only 33 times. It will not precede nor coincide with Thanksgiving, and as Thanksgiving is already close to the end of November, it is worthwhile to break these 33 cases down so as to clearly understand the Thanksgivukkah phenomenon generally.

The Boston lady and her sister-in-law must have done the math: 33 out of the 626 years between 2014 and 2640 makes 5.27 percent—way higher, it bears noting, than the percentage of Jews among the world population, which is somewhere in the neighborhood of 0.2 to 0.25 percent (in the United States, it’s 1.71 to 2.12 percent). Living primarily in the Bay Area, New York City, and Los Angeles as I have, it’s easy to forget how few of us there actually are.

The Jewish-American holiday inferiority complex is almost a cliché. As a friend recently noted, there’s really no comparison. In one column, Easter: chocolate, egg dyeing and hunts, baskets and bonnets; in the other column, Passover: a long book to pass around the table and read before you eat, bitter herbs, saltwater, boxed matzoh, Manischevitz wine. It’s almost like Christianity was invented to out-ritual everything else—oh, wait, it was. (Remember how Christianity absorbed and then overtook all pagan and other pre-Christian religions? Sort of like how movies started opening on Christmas Day and the crowds of goyim edged out the Jews in the theaters?) I have cousins who are ultra-orthodox Jews—they keep kosher, men and women are often separate, the women wear wigs and the men wear hats and curls—and I think their children may be the only Jews I’ve ever met who haven’t envied Christmas celebrators.

When I was in elementary school, I asked my mother for a Christmas tree every year and consistently got the same answer: “You don’t adopt another religion’s rituals just because they’re better than your own.” I remember such an acute feeling of loneliness on Christmas day—the streets empty of people to play with, all my friends busy with their families and their big gift reveals (versus the eight little gifts, stringing you along one night to the next), a special meal, the smell of pine, the singing of beautiful Christmas carols. Even my Jewish friends’ families saw fit to celebrate both holidays.

As an adult, because I don’t have children (who are always the centerpiece of holidays driven by commerce and ritual) or an extended family that gathers, I’ve gotten away from the December activities in which so many people are engaged: buying gifts, traveling to be with family for the holidays, receiving gifts, decorating, cooking, eating. Except maybe the eating. Of course I think a lot about the holidays for product development, sales, and marketing, but this just further distances me from the emotion and real-life impact of the holidays.

Thanksgiving, on the other hand, was and continues to be one of my two favorite holidays (the other being Halloween), a preference I shared with my mother. I most associate Thanksgiving with cooking all day with my mom, my aunt, and my godmother, all kibbitzing and cooking and chopping and nibbling to the soundtrack of the Beatles or Carly Simon. Also, I always loved the meal. This year, to have had the childhood stillness of Chanukah cross with the warmth and vigor of Thanksgiving feels sweet, sort of like when your birthday falls on a holiday and you think the fireworks are for you.

The gathering I’m really excited for this year, however, is our holiday party. Knock Knock has long done the dinner-plus-one thing at restaurants, everybody trotting out their significant others (or, you know, not) for a sit-down with plenty of booze and rollicking games of white elephant. Ever since I rented space in our office complex back in 2002, though, I’ve fantasized about throwing a huge bash in our courtyard parking lot. With a band. And a stage. Our beloved, by-the-book landlord has given us permission to do it. There will be kegs. Food trucks. Wine in boxes. Heat lamps. String lights on posts. The last time it rained on the December date of our party was 2007, so fingers crossed!

I wish I could invite you all. For that matter, I wish that I could alleviate suffering in the world. Most importantly, I wish that I could drink more heavily than is appropriate for a CEO at an office party, but who are we kidding? I end up doing it every year anyway.

Merry happy to you and yours, see you on the flip side of 2013, and in the meantime, remember that Knock Knock gives good gift!*

*That is a subtle way of saying “Please spend lots of money on our site and with our retailers to commemorate a holiday I’ve just deconstructed to suit my own purposes.”