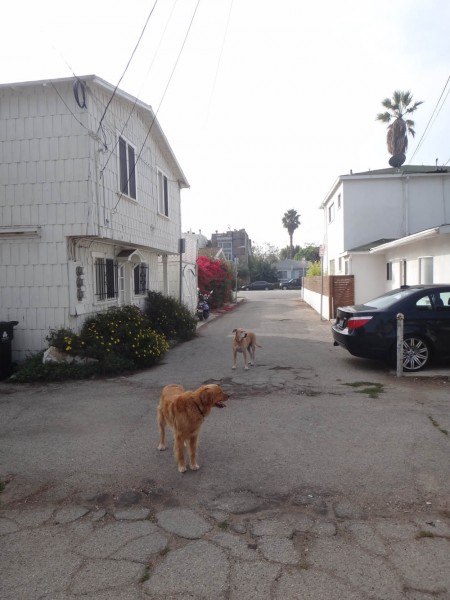 Happy dogs at the intersection of Navarre and Seville Courts (in my Venice mini-neighborhood, the alleys all have regal Spanish names: Cordova, Granada, and Toledo are a few of their alley hermanas).

Note: After approximately 678 words of exposition, there are many cool pictures with descriptive captions below. If you have no desire to read the introductory essay—and believe me, I wouldn’t blame you—just skip down to the pictures.

I’d never experienced alleys before I moved to Los Angeles, and to Venice in particular. Right before I landed in LA, in 1998, I freelance-edited a book called Everyday Urbanism (reissued, in 2008), one of my favorite books I’ve worked on. A compilation of essays about slices of the greater Los Angeles metropolitan area, its timing was perfect; I was just starting to realize, with the help of another book I was overseeing, Hollywood Handbook, created with the Chateau Marmont hotel, that Los Angeles had some guts and depth under its smoggy, Botoxed skin. When you’re raised in the Bay Area, it’s practically your birthright to hate Southern California. We would always explain the “rivalry” like this: Northern Californians think that Southern Californians are materialistic and vapid and dumb, and Southern Californians are too materialistic and vapid and dumb to think about Northern California. Did you catch the superiority complex there? What I learned once I’d been living in Los Angeles for a while is that Los Angeles is huge and San Francisco is small; Los Angeles basically thinks of San Francisco as a hilly bed-and-breakfast. It’s a contest of non-equals in which one side cares a lot and the other side not at all.

Anyhoo. Between my newfound friend Laurie Jacobson, a Hollywood historian I’d hired to contribute to Hollywood Handbook, and whose amazing apartment right under the Hollywood sign I’d take over when I relocated from New York City (she was moving to Santa Rosa to marry the man who played Timmy on Lassie, whom she’d met at a nostalgic stars convention; their wedding, at the Hollywood landmark Yamashiro, was like a photo album of child stars, including the Beaver, familiar faces all transposed onto middle age); the pictures we were using for the book, from the Bison Archives, along with the stories told by its founder, the encyclopedically knowledgeable Marc Wanamaker; my increasingly frequent visits to LA that didn’t only involve staying with my grandparents in their trailer park in the northeast corner of the Valley (not a stellar Southern California perch) and accompanying them to malls and amusement parks, I was starting to get the sense that Los Angeles was a pretty rich place. And I now get the sense that that was a pretty long sentence.

I spent about a year and a half under the Hollywood sign, in Beachwood Canyon, before my friends Carrie and Dean exposed me to the beachy, eminently walkable perfectitude of Venice. I seem to land in the Berkeley of wherever I go—Ann Arbor, Michigan; the East Village in NYC; and then Venice. I house- and dog-sat for Carrie and Dean to see if it was a true match and wore out their not-young pug, Doc, exploring by foot. Soon after, Carrie and Dean decided to move back to the Boston area, where they’d both grown up, and I took over the undermarket lease on their house (thank god they moved back a year later, unable to stay away, and bought another house a few blocks away). I now live next door to that house (long story), right alongside the namesake home that has the KNOCK KNOCK on the front door.

As I walked Doc I discovered the alleys and remembered reading about them in Everyday Urbanism. The alley essay talks about the hidden, unspoken economies and social interactions of the Venice alleys—the wealthy homeowners, exponents of rapid gentrification, leaving their castoffs on top of their garbage cans (Venice garbage cans are left and emptied in the alleys) for the homeless walking through; the Central American can collectors . . . there were more layers, but it’s been a long time since I read the essay.

I now walk the alleys primarily because I can let the dogs run and sniff and explore off-leash without endangering them too much, a calculated away-from-the-real-street risk that I’ll be able to anticipate someone pulling out of their garage. I recently mentioned to a friend how much I love the alleys of Venice, how I’d never encountered alleys before LA, and he said, “That makes sense because it’s such a young city. You wouldn’t find alleys in older city planning.” I’m not sure if this is true, but it appears that way to my naked (okay, contact lens–clad) eye.

Venice Alleys: A Photo Essay (vs. a Words Essay): 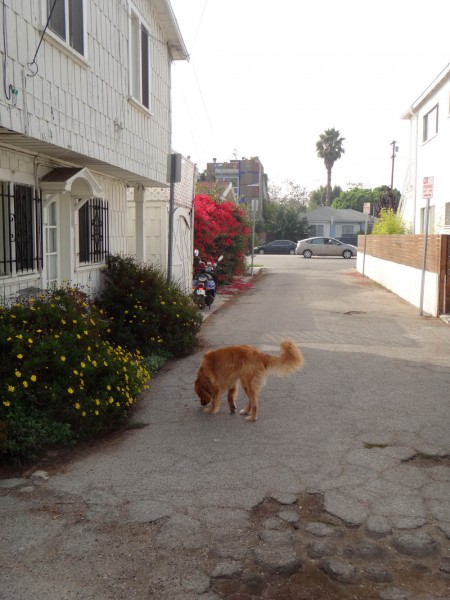 Typical Venice. Ramshackle original Victorian-ish shingle house, converted into multiple residences, with a newfangled “lot filler” (that’s what I call the big bricks of homes that the newer Venice money builds on the 26-by-100-foot lots; you want a big house when you’ve paid $1 million for a tear-down) in the background (and, of course, a Prius driving by). Paco has found something of olfactory interest on the asphalt (the alley pavements are in terrible condition because the city doesn’t take responsibility for them; I’m not quite sure how they managed to get out of that). 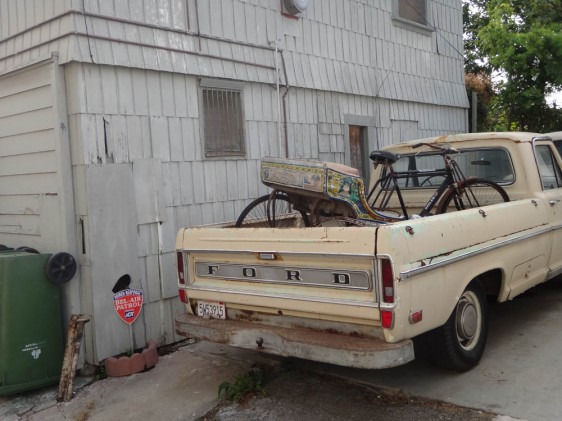 Compare-and-contrast auxiliary vehicles, one of two. On one side of the alley, a vaguely Indian pedicab in the back of a pickup truck of non-recent vintage (protected, of course, by Bel-Air Patrol, despite Bel Air’s being some 12 miles to the north of Venice and worlds apart). 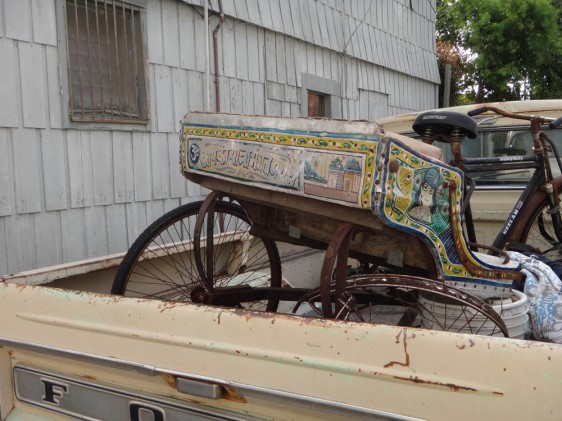 Pedicab close-up. I wonder if it’s related to the incredibly active Hari Krishna center nearby, which holds an annual float parade, the Festival of the Chariots (here are a couple videos: one illustrating the floats in motion and the other capturing musical performance and some unique resident dancers), on the Venice Beach Boardwalk. The pedicab isn’t secured in any way, and it’s been in the back of this pickup for at least a year. I sometimes wonder if anybody would notice if I took it. I won’t, though. Just one of my (I admit, not few) criminal fantasies. 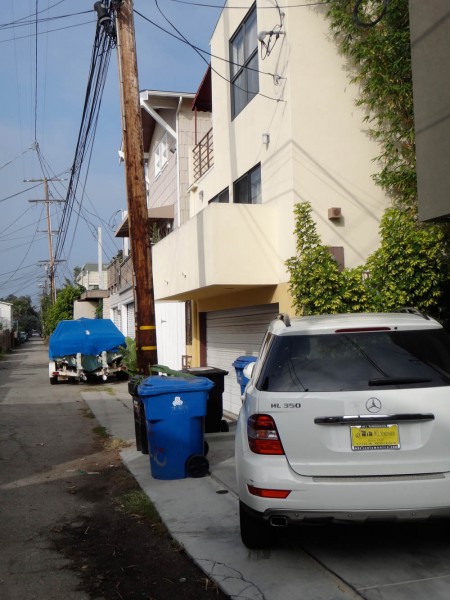 Compare-and-contrast auxiliary vehicles, two of two. Directly across the alley from the pedicab-pickup combo, not 15 feet away, a few lot-fillers, one with a sizeable boat (it’s new-looking and at least 25 feet long) and the other with a new Mercedes. 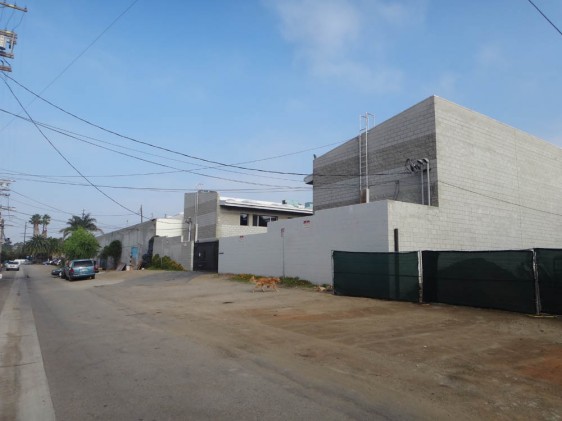 Coming around to another alley entirely, on the other side of Abbot Kinney from my home alleys: the Knock Knock alley. That cinderblock building is the backside of our office complex. They’ve recently swept the alley clear to increase parking. The construction on the right is work to convert the former Samy’s Camera building into a new, huge Quiksilver store. 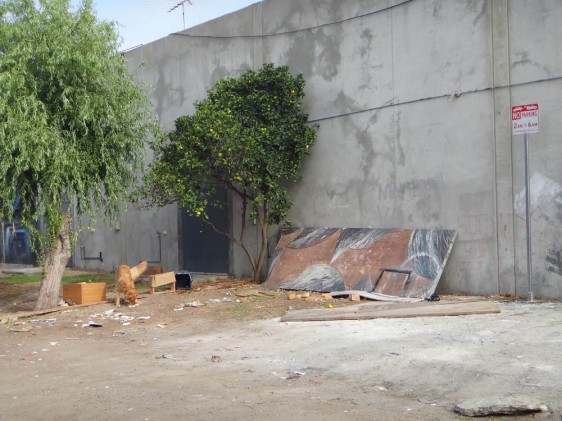 Next door to us leans the detritus of the studio of the artist Laddie John Dill and a slightly improbable citrus tree, even more improbably thriving. A huge piece of Dill’s, similar in approach to this bedraggled outtake, hangs over the bar at Hal’s, one of the oldest restaurants on Abbot Kinney (i.e., circa 1987, also famous as the year I graduated from high school), the exterior of which is often used as a location on Curb Your Enthusiasm. 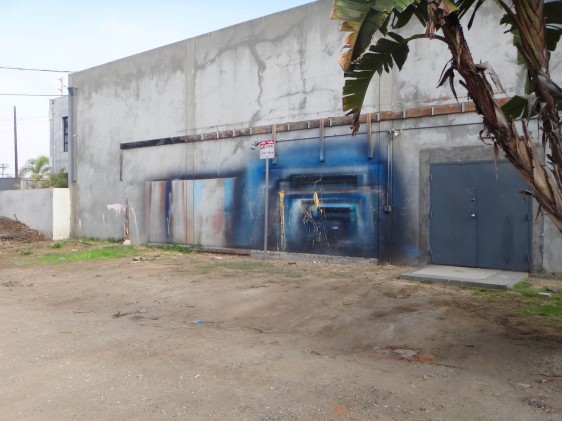 Dill shared the former bottling plant (so sited for convenience to the railroad that used to run through the alley; the city only recently completed covering over the tracks) with Ed Ruscha. Ruscha loved the light at the back of the building, space that was enclosed by a wood shack (you can see where it attached to the building along the midheight wood horizontal). I love the concentric ghosts of the large-scale canvases that he sprayed as they leaned against the wall.

Our office landlords own this building, too, and they battled with the city for years to keep the sheds from being torn down. The city prevailed, and the sheds were demolished earlier this year. Here are a few articles on this, from The New Yorker, the New York Times, and the LA Weekly. The relevance of Joni Mitchell’s now-cliché is almost too cloying: “They paved paradise and put in a parking lot.” 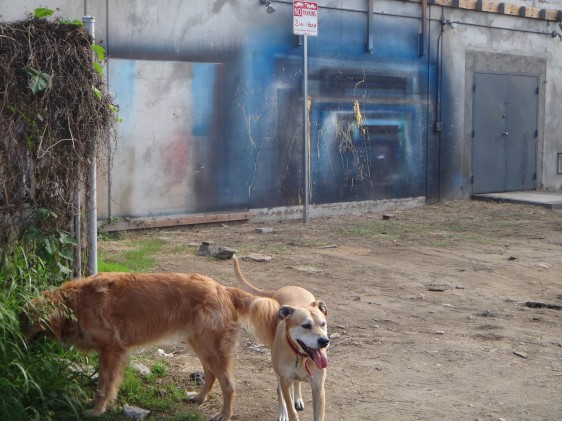 I love walking by this “mural” every day (it’s on my way home) and think it should somehow be landmarked. I wanted to paint a border around it and stencil something like “Ed Ruscha was here: 1985–2011,” and even got permission from the landlords, but I haven’t gotten around to it. The landlords’ only concern was that it would invite more graffiti, and even though we haven’t yet memorialized the spot, that yellow splatter of paint in the middle (which is grotesquely three-dimensional) is new. 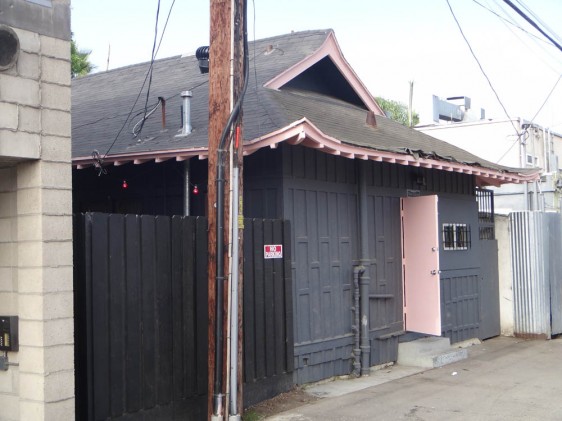 I supposed it’s a bit anticlimactic (not to mention loooong) to follow the Ed Ruscha story with more alley pictures of lesser importance, but there are two additional elements of our office alley that I love. One is this this little pagoda-style folly of a building that’s actually the back house of another, newer building that fronts on Abbot Kinney (you can’t see the old pagoda from the street). It’s currently home to the Harlot Salon, recently opened by the friendliest woman, Marylle Koken (“pronounced like the mushroom—morel,” she told me), who doesn’t mind letting the dogs venture through the open back door when I take them out for breaks. 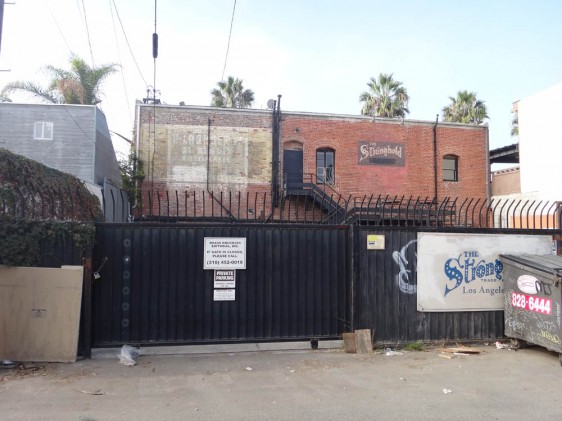 Finally, this great old brick building, currently home to a custom-jeans company called the Stronghold (established, so the site says, in 1895, the first denim brand manufactured in Los Angeles—but with a long break, I’d imagine, since the current company, which makes “reproductions” of the originals, isn’t that old). The building is beautiful . . . here’s a picture of the front, which I didn’t take: 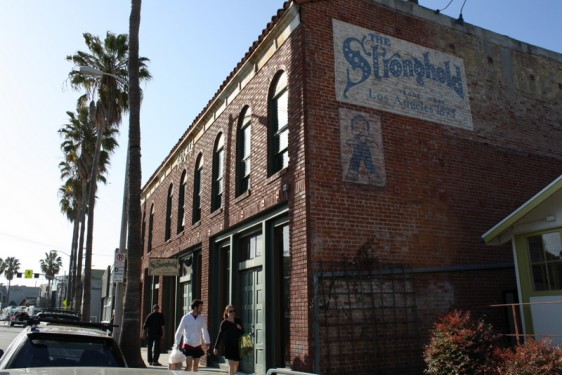 . . . but I couldn’t easily find historical information about the construction other than to learn that it was built in the early 1900s. I only just now learned, while conducting real-time blog-post research, that the Stronghold also hosts secret, quasi-invitation-only “speakeasy” concerts by the likes of Jackson Browne and Ben Harper.

And there, dear readers, you will conclude, as I have, that the Venetian cookie has just crumbled full circle. After writing a magnum blogus about being an insider, at the end of the day (or the end of post), I am ever reminded that I’m never quite inside enough, as so few of us are. Color my paradise at least partially paved.