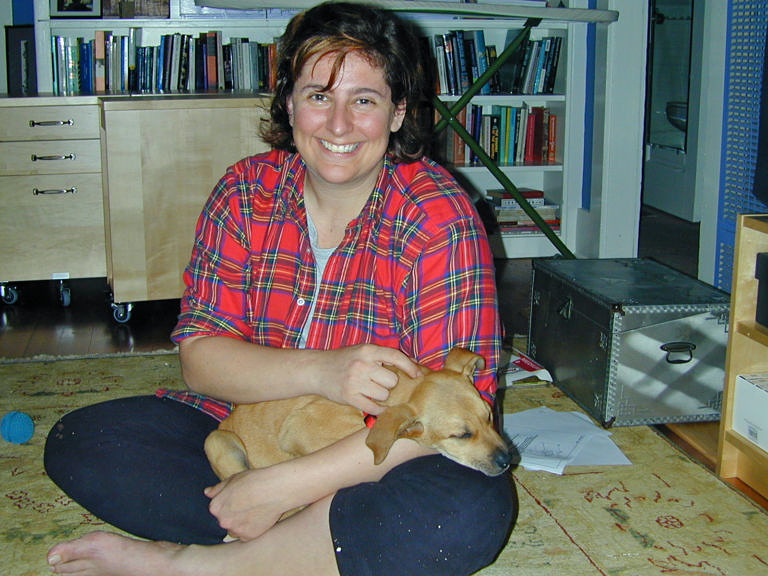 Sweet Maisie as a puppy, soon after her homecoming. I don’t know what was up with those awful streaks in my hair, but I do know I was in the middle of organizing or housework or something.

December is a very special holiday month for me and Knock Knock—because it’s Maisie’s birthday. It’s the whole month rather than a single day because when I adopted her from the South Central LA Animal Shelter, in February 2000, I was told she was eight weeks old.

All the young puppies were kept together in one kennel area, and as I watched them, Maisie stood out. The other puppies were either bullies or fearful wallflowers, the latter almost catatonic, shivering in the corner as the bullies picked on them. Maisie was the only one who was neither. She had this sense of self-possession that has carried through in her character to this day. She would play and wrestle happily with the bullies, but if they started to get rough or bratty, she would just walk away without engaging. And she’d approach the poor terrified pups and lick them or lie next to them.

I asked to take her for a test drive, and when she was put in my arms (only 15 pounds—now she’s 75), her whole body wagged and wriggled as she exuberantly licked my face. Then, all at once, her whole body went trusting and limp and her head plopped decisively onto my shoulder as if she’d snuggled in for the long haul.

I found the Knock Knock office complex while I was walking with Maisie. I’d just decided to put aside the book I’d been working on for a couple years and make a go of this Knock Knock thing. In December 2001, when Maisie turned one, I signed a lease to start in February 2002, which made Knock Knock real for me. Maisie was the charmer of the complex, playing and romping with her favorite soccer ball in the parking lot when we worked outside.

Now Maisie’s eleven, and Knock Knock’s almost ten. We have a few dates from which to choose Knock Knock’s anniversary: January 1, 2001, is the date of our incorporation. We started work in earnest in March or April. Our first products came out in October 2001. I personally think of our anniversary as starting in March and lasting through October.

Maisie was featured prominently in our early catalogs and website, in particular her formal portrait for our first catalog in which she looks breathtakingly dignified (FYI, like me, she’s never really enjoyed being photographed). Paco came along six years later, and while he’s an important part of life here, Maisie’s the heart and soul of the place. Maisie’s just one of those special dogs. She’s got wise eyes and somehow gets the ineffable “it.” Everyone notices that about her. And Maisie’s starting to get really old, and it’s breaking my heart.

I also can’t believe that Knock Knock’s going to be ten. We were the young upstarts for so long, and now within the gift industrial complex we’re almost part of the establishment. With both Maisie and Knock Knock, as with raising children, the saying comes to mind “The days crawl by but the years they fly.” Every day at Knock Knock has an intensity and density to it that make every last few months feel like longer ago than they ever really are, but oh my god, where did the years go? Like in Joni Mitchell’s “The Circle Game,” one of my favorite camp songs (Camp Kee Tov was pretty comprehensive in its musical repertoire), the teenage boy is told, “Take your time. It won’t be long now / ’Til you drag your feet to slow the circles down.”

So even though we’re supposed to think about the holidays during the holidays (and sell some products—buy, kind readers, buy!), the end of the year is also about endings and upcoming new beginnings. I find myself contemplating what it is to lead more of an institution than a scrappy startup, how to keep the freshness but combine it with greater reach and more business acumen and sophistication.

And with my dear sweet Maisie, I’m pre-mourning what I still have (an awful trait of mine—I seem to have no capability to live in the present). Her arthritis slows her down and her hindquarters have to be lifted into the car. She’s had a variety of health problems, any one of which could be her downfall. Her muzzle is almost completely white. Her personality has evolved as she’s gotten older—she’s kind of crotchety now, while still being the sweetheart she’s always been. She’s really insistent about the things she wants, including letting me know she’d like me to take away the bone that Paco’s chewing and give it to her or get Paco out of her bed. She’s been with me through almost all of my thirties, and all of Knock Knock, which for many years was no easy thing, so her loving constancy really meant a lot to me.

Though I am woefully prone to nostalgia (“hypochondria of the heart,” as someone characterized it)—even before something has ended—my pre–New Year’s vow* for Maisie, for Knock Knock, and for as much of life as I can muster, is this: enjoy where we are at this moment, because soon enough I’ll miss where we’ve been.**

*It’s unlikely to work, mind you, but I’ll definitely try.

**This is a little corny for me and Knock Knock, but Maisie’s one of the few forces in my life that can bring me to corn.

Around the corner from my house (and around the corner from the office, because they’re just a few blocks apart) is Maisie’s tree. I don’t remember how she discovered she could do this, but she loves loves loves to jump into it, crane her neck up and look around, and jump out. When she was younger, she did it over and over again in a row. I took this video a little too late, a couple years ago, and she was already having trouble with the jumping. Now she puts her paws up on the tree and I lift her rump just as I do to get her into the car—she still loves it. When she’s barking like she is here at the tree, it means she’s really excited—when we’re on a walk, she positively sprints for the tree.