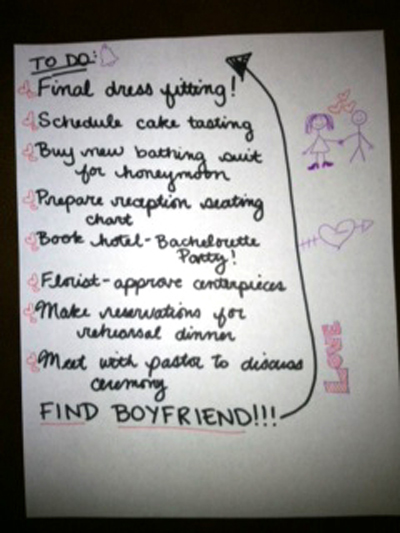 Okay, so let me start by saying that I hate the whole coddle-the-children trend of “Everybody’s a Winner!” and “Trophy for Showing Up!” I don’t think it prepares children for the real world or motivates them, and possibly leads to a sense of entitlement that will plague their years in school and in the workplace. I believe in healthy competition, wanting to win, and having something to work for. Not that I have an opinion or anything.

That said, I was so moved by the entries to our very first blog competition that I couldn’t stand to choose. Rest assured that future competitions will be completely cutthroat. So everybody who sent us their to-do lists, ranging from the heroic to the hilarious, is going to get a To Do Pad and a To Do Sticky. That’s right—just for showing up.

Here were the utterly tickling and sometimes befuddling entries, in theme order:

Some people were either inspired by the ridiculous To Do List we posted with the contest or else have their own great senses of humor (probably the latter) and sent in fun lists that told a story:

Clearly we have a kindred spirit in Knock Knock friend, Megan Vincent. This ambitious to-do list, like our sample, reads more like a vision board, a practice that I find oddly similar to the collages that my friends and I used to make for each other in the late seventies and early eighties out of fashion magazines that were way too old for us. I mean, really, is there a big difference between this (vision board) and this (seventies-ish collage)? Fortunately, Megan was able to dispense with all that and whizzed past the glue stick straight to the vision. And really—are her illustrations not simply adorable, especially the bubble letters? (Another artifact from our seventies and eighties girl-culture prowess.)

As you can imagine, dogs loom large in my own fantasies. Except for the fact that they’re my reality. So really, other things occupy my dream life. These two fantasy to-do lists gave me an “Awwww” and also made me feel guilty for not walking my dogs last night.

Yo Calle Jo (maybe not his or her real name—but I’m going to go with “her,” given the “Jo” and the handwriting) is an ambitious (if a bit lazy) optimist who, like me, would like to get her dog to do the work of life as well as contribute to some R&R. Yo, Calle Jo—if you succeed, please DM me the how-to deets. 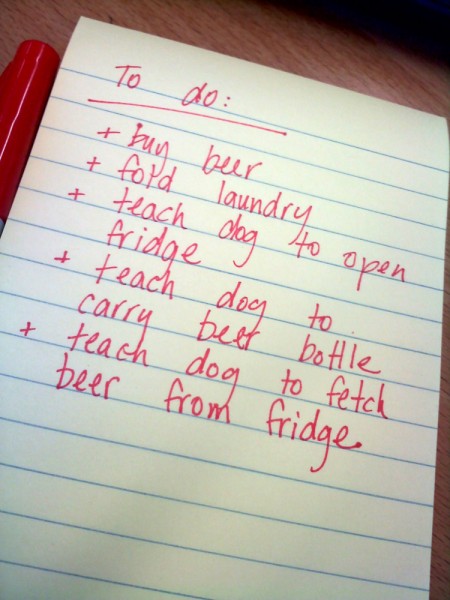 DOKKer Gucci the Boxer (real full name, email and all; DOKKer = dog of Knock Knock, of course) has a lovely brindle paw (I love the word “brindle” and frequently cannot bring it to mind when necessary, which isn’t often) and outlines an ideal dog’s life, were dogs to make to-do lists. Perhaps they do, in their own minds, something that I hope to discover when I invite an animal psychic into my home in the near future (seriously—I have a recommendation from a friend). And note to self—get Maisie and Paco their own email addresses. Actually, Maisie use to have one, until we got all corporate and stuff.

The ever-lovely Melanie Gasmen, our social media babe, immediately identified with this one, as she’s been plagued lately by car woes. I mean, hello—it’s really hard to service your car if you don’t have a car to begin with! And road trips just aren’t the same on foot. Trust me on that. Thanks to Jennifer Stevens for sending this one in, even though it did arrive with a law firm’s confidentiality notice, though I would hope that our terms of use trump that. Because I don’t want this blog to be sued until it’s out for a full year. Though I must say, after nine years in business, I’m pretty accustomed to having those at the bottom of any missive sent from a legal person, and they don’t scare me so much anymore. 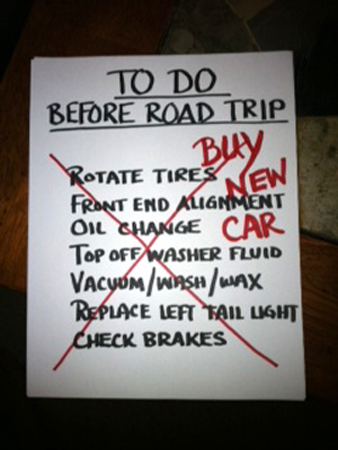 Last in the fantasy category is one that goes all out. Or maybe it’s actually from Lady Gaga herself—she could be a secret LMOKKer (Little Monster of Knock Knock). Now, can I just say, I thought all the Gaga hype was crazy until I saw her perform a year ago in that one where she was hanging from a rope? I was of the pro-Egg ilk, an unpopular stance, and I personally think she has an ever-brilliant knack for the pop-culturally unexpected—and smart. Dressing in drag? Genius in that context. No makeup on the cover of Harper’s Bazaar? Hello. But the ultimate in paradoxical hypocrisy (I’m assuming from the magazine, not from Gaga), is this: “To get Lady Gaga’s no-makeup look, try Studio Sculpt SPF 15 Foundation ($29.15), Prep + Prime Highlighter ($23), Brow Gel ($15) and Prep + Prime Lash ($15). All M.A.C.”

Our Gaga aspirant shows management skill (“Delegate all items to assistants”), good etiquette (a thank-you list), and a graphic design sensibility (“Gaga font: the new Helvetica for Monsters!”). And a kick-ass sense of intelligent humor: “Call D. Chihuly re chandelier costume”? Genius. Show ideas: “Norman Rockwell cover”? “Ikea”? Love. “What are Birkenstocks?” I’m from Berkeley, and I’m with her. Hell—this is so right on that it just might be Lady Gaga! 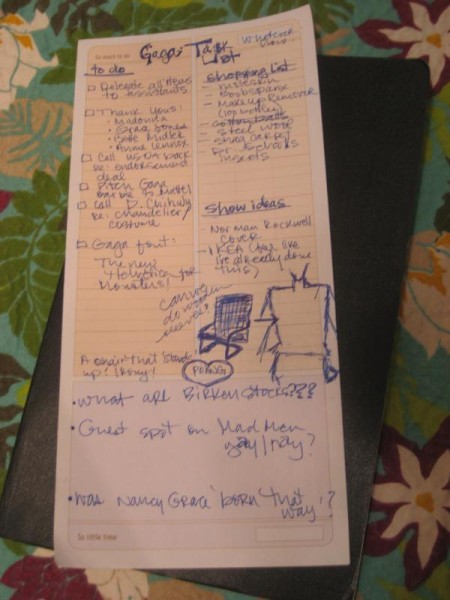 We love us our customers, especially the ones who actually use our stuff. Okay, we like the ones who gift Knock Knock goods as well, and the ones who never take our stuff out of the packages. Just as long as you like it and buy it, we’re good. So, imagine our delight at category 2, those who either used Knock Knock products for their lists or referenced Knock Knock in their lists. Obviously the Lady Gaga list wins on two counts—it’s on our now almost defunct Fine Print “So Much to Do” List Pad (currently on sale until they’re gone—get ’em while you can!).

The first entrant in the BFFOKKers category is another category crosser—Amy Norton created a combo BFFOKKer and Versimillitudinous (i.e., Real) to-do list. Ms. Amy would also be in a winner in the productivity and health categories: she’s completed “5K on Saturday,” “pick vegetables,” and “anvil” (really—in the cover email, she notes that this is a “long story”). But she’s also clearly slacking—I mean, Amy, when were you planning on getting around to canning those cherries? Let’s get it together! Amy’s list has the honor of being the only one that requires redactions. It was just going to take too long to doctor the image with 555 phone numbers in her handwriting. 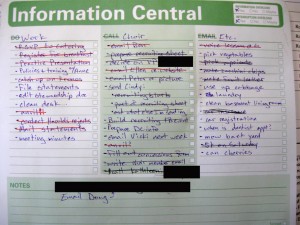 Next in the BFFOKKers space? Yes, I truly hate that word, so I used it ironically. This adorable (I mean, check out those dots and the curl on the T!) from Kristen. We love making students’ jobs more fun, and we’re hoping that the fact that she’s gunning for school supplies means she’s going to spice up the campus stationery scene. And the fact that she ranked us just below the first tier (or, really, above, because it’s often represented as a pyramid) of Maslow’s Hierarchy of Needs? We couldn’t be more touched. 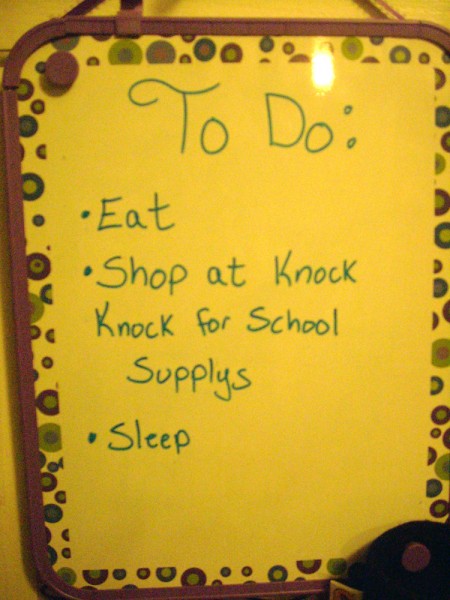 . . . Stay tuned for the rest of the winning entries tomorrow!