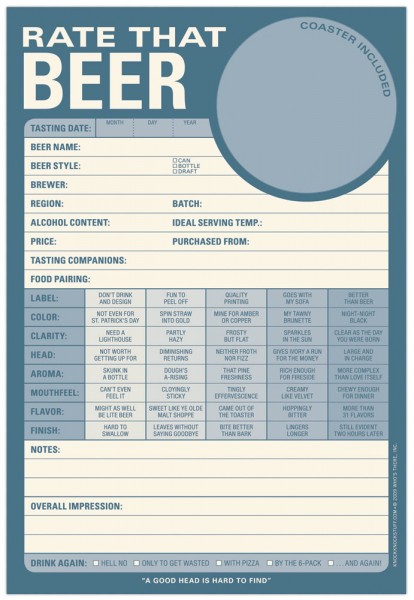 Tear off a sheet of our Rate That Beer Pad for you and your friends.

It’s been four years since “one of the most memorable upsets in Super Bowl history,” but alas, it’s t-minus six days until the “Pats” and the “G Men” will face off again.

Even if you don’t care two cents about the teams playing (or football in general), the game-day tradition has evolved into being more about stuffing your face with Paula Deen-ified noshes, slamming down pint glass after pint glass of filled-to-the brim ale, and ranking your favorite over-the-top commercial with friends and acquaintances than paying attention to the actual number of touchdowns.

But this time around, we have a few ideas for you to try out during this Sunday of super, making it that much more entertaining for you and the buddies, or at the very least, preventing it from becoming a “memorable upset.”

1. Tear off a sheet of our Rate That Beer Pad for you and your friends to use as mock placemats. You probably won’t have time to rank your beers, but it is blue (a color shared by both the New England and New York), so technically it’s interchangeable for each team.

4. Keep your What to Eat Pad out in the open and suggest that guests swap recipes with each other (if it’s a pot luck) depending on their favorite eats, or tell them that you would be happy to write down your own recipe for them (unless you’re not).

5. Take a break from the commotion and watch the real action going on at Puppy Bowl VIII. There are definitely more cuties in this game for sure.