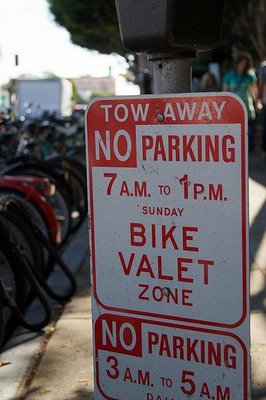 Sometimes tourists take pictures of these signs—oh, so LA.

Many people think there are no seasons in Los Angeles. The transitions are subtler, of course, and the two yucky ones are infinitely more bearable than those of other climates, but they exist nonetheless. In autumn the air takes a turn toward the crisp and carries the smell of over-eager fireplaces. In winter the light is bluer, rain makes a welcome appearance, and nights actually merit jackets. Spring is announced by the sweet smell of jasmine; we are elated at springtime but much less than those who have just endured a true winter. Summer’s light gets round and yellow and the dry heat sets in, bringing a sense of slowness and playtime. Right now it’s totally summer here in LA.

In Venice on a summer weekend, it seems like the whole world is on bikes. I just got a new one, in Knock Knock orange, and I feel like I’m flying. Errands seem more fun, and I’ve learned that the Viceroy Hotel has an incredibly crowded bike rack. The Viceroy’s bellmen wouldn’t valet my bike but there are actually bike valets in Los Angeles, at events like the Sunday Santa Monica Farmer’s Market (where the valets often find themselves parking fancy baby trailers and fielding requests for Bugaboo storage so the children they contain can ride the ponies) and the Twilight Music Series at the Santa Monica Pier. In a not-unsurprising turn of character, I had never, in thirteen years in Los Angeles and twelve in Venice, gone to the Twilight Music Series. I thought it would entail standing around with people on the pier. It turns out you bring a picnic and wine and sit on the sand looking up at the pier after parking your bike in the most orderly way possible. I can’t believe it took me twelve years to get there (a friend was visiting, of course; otherwise I never would have tried it).

At work, we have every other Friday off between Memorial Day and Labor Day, our Summer Fridays. After Labor Day, the resumption of regular Fridays feels a little like when it’s dark early right after daylight saving switches back over—a bummer. Though this year we’re inaugurating two new practices to foster inspiration among the creative team: Freedom Fridays and Afternoon Delights. Freedom Fridays will fall once a month. For the first half of the day, we won’t be allowed to do any assigned work. Instead, we have to pick a non-work-related creative activity, whether reading a few of the gazillion art and design books in the office or sketching out a new, unassigned product idea. Then at lunch we’ll come together and share what each of us did. Afternoon Delights (in our definition) will be field trips to museums, Color Me Mine (just joking—but we do want to try a craft class), and shopping areas (for corporate espionage, i.e., understanding the marketplace), and will happen once every three months on a Wednesday. With all our deadlines—and we pump an awful lot of work through a lean, productive, talented group—sometimes we have a hard time remembering to feed and replenish our creative juices and think more freely.

It always takes new Knock Knock team members a while to wrap their heads around our business seasons, which are completely different from the life seasons at hand. Right now we’re putting the finishing touches on our release for Spring 2012, which will hit the trade show circuit in January and find its way into stores and onto our website in early February. All the products for Spring 2012 need to go to manufacturing by Labor Day. At the same time, we’re starting work on Fall 2012, which will go to manufacturing by Christmas and will make its debut at the National Stationery Show in May. I’m no longer confused by our product seasons, but I sometimes forget where I myself actually am in the year.

From a business perspective, about halfway through a year, at the six-month point, it feels like the year is effectively over because we tend to know how the year will finish in terms of revenue and our products for the year are all released. At the nine-month point, we start convincing ourselves that the year to come is the one that will bring all the good things, all the successes, that we didn’t necessarily have in the current year. After Labor Day, we start projecting and budgeting the following year, a process that used to be infinitely more arduous before our financial statements became almost entirely formula driven and before we started projecting in a rolling (vs. trailing!) way, meaning that we constantly update our projections so that we have twelve months of visibility at any given date, not just on January 1.

And because I’m a self-flagellating neurotic, around Labor Day I start regretting all the summer things that I didn’t do and transition to theoretically looking forward to them for the following summer, even though I probably won’t do them then, either. You know, stuff like hiking every weekend and swimming in the ocean once or twice.

But I love the fall, and I love transitioning into work on a new product season. By this point in the development of the Spring release, all the products are known quantities, many of them finished. To be honest, at the end, we’re kind of sick of working on them. So turning to the new list is exciting and reinvigorating. I look forward to dropping teasers about it in the near future. We’ve got some exciting and surprising (truly!) new things on the docket for 2012, some of them top secret, and we look forward to your reaction as they emerge.

Note: One of my favorite quotes is “I didn’t have time to write a short letter, so I wrote a long one instead,” variously attributed to Samuel Johnson (a dyspeptic-looking man, it seems, at least in his Wikipedia portrait) and Mark Twain. Have you noticed that’s my approach to writing?