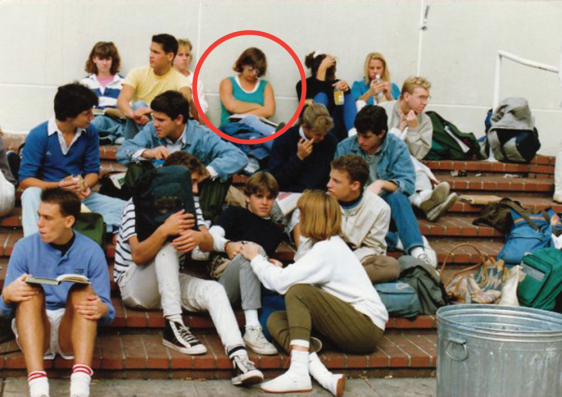 I was tagged on Facebook in this picture from high school (I’m the person I circled in red). I will have you know that I was likely up late studying (note the open book on my lap), not partying, which I confined primarily to weekends. FAQ: Berkeley High School; Berkeley, CA; senior year, 1986/87.

Sleeping and regular digestion are two real human superpowers with which some are blessed and not others. I know many people (mostly men) who are able to fall asleep anytime, any place, on command. They don’t even have reading lights by their beds because they turn off the overhead before they climb under the covers, asleep by the time their noggins hit the pillows.

Probably because I’ve always struggled with bouts of insomnia (the can’t-fall-asleep kind, not the can’t-stay-asleep variant) and also because, ever since early childhood, I am a remember-my-dreams-every-night, paging-Doctor-Freud type of dreamer, I am fascinated by sleep and dreaming. It’s amazing that something we spend more of our time doing than any other specific activity has only become a serious target of scientific study in the last thirty years or so. It’s long been thought of as the absence of consciousness rather than a distinctive and interesting state unto itself. Now that studies are uncovering sleep’s critical role in, for example, memory, reading all the reports and analyses has me like a kid in an Ambien store.

It’s a huge improvement in all our lives that we are in a historical moment of valuing sleep, both quality and duration. During high school, college, and my twenties, sleep reports were a game of one-downsmanship—bragging to one another about how little sleep we were able to manage. (I was, during this period, known among my groups of friends as the queen of the all-nighter.) In June 2011, I saw Arianna Huffington speak about the importance of sleep. It’s become one of her causes—I particularly love this column title “Women, It’s Time to Sleep Our Way to the Top. Literally.”

People have controversial feelings about Arianna Huffington, but I think she’s an amazing woman—and a good sleeper.

We are truly in the midst of a shift in thinking on this important life activity. It feels almost as revolutionary as advising people to consume 5,000 calories a day—could it really be true? Sleep has been under direct assault since the invention of electric light, with subsequent incursions such as television, computers, and handheld devices. Just as we can now buy any fruit or vegetable, regardless of season, so too can we pretend that night is day with the help of human tools. Who wouldn’t want to sleep less, for productivity? But if sleeping less actually diminishes productivity, are we helped by lying to ourselves about what we really need? Friends of mine who are parents of adolescents bemoan their children’s lack of sleep at the most important time in their lives, when their bodies and brains are growing, because of school and commute schedules that start at 7:00 a.m. and homework (like my own during high school) that demands a bedtime past midnight.

When Knock Knock envisions new seasonal product releases (hopefully after a good night’s sleep), sometimes we think about product types (pads? boxes? flipbooks?) and other times we ponder themes (cooking? dating? WTF?). For Fall 2013, we wanted to create sleep-related products. You know, to justify the entire team’s sleeping in. To that end we created Dream Masks (ready in the Knock Knock store 10/7) to help you direct your dreams to your favorite movie genre (their powers of suggestion could really work if you follow lucid-dreaming techniques); the Dream Journal, which can truly help you understand and gain more control of your dreams; and the Get Some Sleep Pad to help insomniacs like myself cross things off and quiet our minds.

At least I have regular digestion.