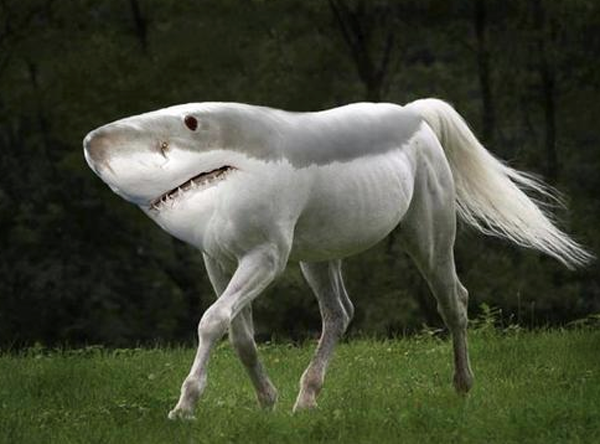 At first we were mildly disturbed by this, but then laughter broke the silence.

The popularity phenomenon around Discovery Channel’s Shark Week is still burning through these last few days. It’s become a challenge to maneuver through social media channels without stumbling on the latest shark-crazed post. Shark Week’s lure has even seeped into the Knock Knock office, with several Knock Knockers sliding into an extensive convo on the so-bad-it’s-good “Sharknado” flick. People just have a fascination with sharks, which is A-OK. But can someone let us know when mixed-breed ‘doodle’ dog week is, too?

If you still need to satisfy your shark-fix outside of the Megalodon special and its own faux pas, why not throw a shark-themed party? Or read some good ole shark literature? Or perhaps dress up in shark-inspired outfits? And feel free to whip-up shark cupcakes and let us play taste-tester.

And if you haven’t seen it yet, one of the winning viral vids of the week was definitely this cat on a Roomba, dressed as a shark, which leads into a post all about cats celebrating Shark Week. And for the record, we’re all for a Cats Dressed Up as Sharks Week, Discovery Channel. Just sayin’.

Yup, we watched all of this and will probably watch it again . . . Is it the weekend yet?

But if you’re a shark lover, you’ll want a Shark-o Clump-o-Lump for yourself. Watch out for those shark-o attacks, though!

Sign-up for our newsletter today and new subscribers get 15% off any order of $50. And subscribe to this blog for more news (and wit).