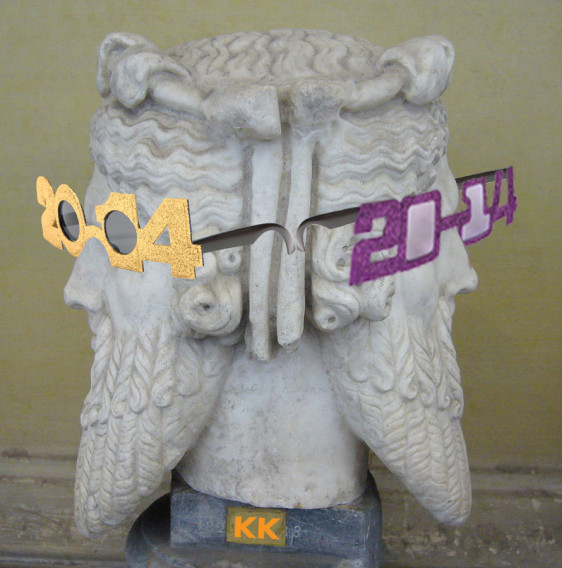 Most people would have had the rear-facing Janus wearing 2013 novelty sunglasses, but I prefer to focus exclusively on 2014.

Welcome, January! Welcome, 2014! So far, you feel exactly the same to me as December 2013 did. Okay, I’m a lot closer to having to go back to work than I was in December, mere days ago, and I’m going to be at work for the majority of you, January, but I honor you despite the fact that you mark the end of my vacation.

I honor you because you are named after Janus, the god of two faces. Yes, one is looking forward, and the other is looking back, but that’s still two-faced to me. Also, you’re the god of doors, which I go through on a regular basis. I don’t think it was you who opined “When one door closes, another opens,” which is good because I think it’s kind of a bullshit saying.

I also look to you, January, for putting a kibosh on the whole holiday thing. I might not be so happy about the end-of-vacation element, but I’m relieved that all the outings and events and errands and social expectations are done with for a while. I’m exhausted, and I don’t even have to deal with kids and relatives and such, so I can only imagine how the breeders must feel.

Even though I finally understand, at the age of forty-four, that New Year’s resolutions are bunkum, I do appreciate you, January, for allowing all of us to feel so very fresh and new and hopeful. And I know that the media appreciate you for that tired chestnut “New Year, New You,” an angle that will forever suck in our tummies and our dollars at the newsstand.

Now, 2014, I know this sounds improbable, but I already appreciate you and wish to honor you by misusing Sanskrit words. Like Sanskrit, there’s a lot I’ll never learn, but the world will learn what I’ve learned about never learning with one particular title in Knock Knock’s Fall 2014 release—but I can’t say what that is yet, other than to note that it makes clever use of the word “fuck.” And also, 2014, you’re going to help us introduce some collaborations the likes of which Knock Knock has never before done, taking the company in exciting new directions. But that’s still classified, too. As is some innovation in the digital arena. Basically, there’s not much I can tell you—but you’ve got a front-row seat.

2014, what I think I most appreciate about you is that you haven’t really happened yet. Everything is still possible, all is still new. You may think that’s the case for every year, but I didn’t feel that way about 2013. 2014, you are clearly the superior year. What you do have in common with your predecessors, though, is that for about 6 weeks you will allow me to feel the uncharted frontier of the future, like when I was in high school and college and had no idea how long adulthood would be.

I beseech you, 2014, to live up to your hype. You can totally do it—you can be the year in which everybody says “I can feel it—it’s going to be a good one” and it actually happens. To everybody. Except a few people of my choosing. 2014, you have upon you the mantle of a hungry generation sick of 2013 and 2012 and 2011. Enough already with prior years: we’re gunning for change and you’re the one to hit the target (including on gun control). I can tell you this, 2014: next December, you will be nominated for “Best Year” and you will win by a landslide.