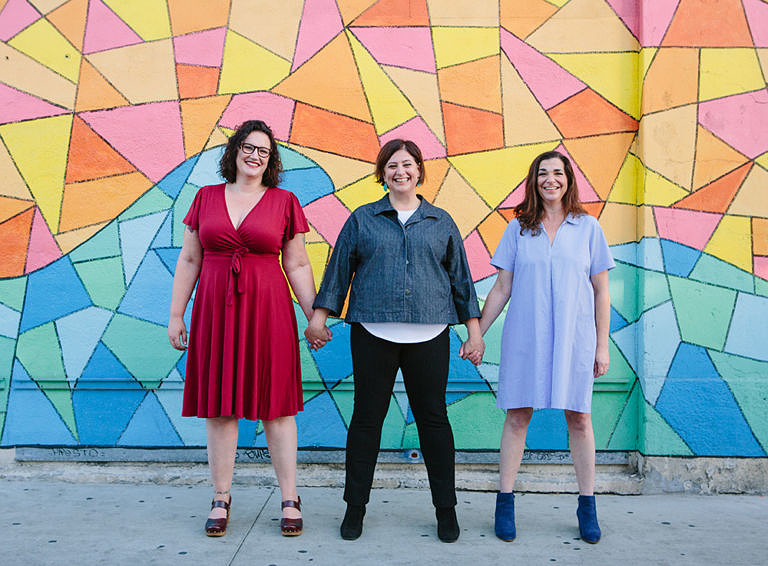 Left to right: Emily McDowell (founder of Emily McDowell Studio; and no, the name is not just a coincidence), Jen Bilik (founder of Knock Knock), and Sara Stein (founder of Sisters of Los Angeles). We make up the Who’s There Group, and we are more than the sum of our lady parts.

I had no idea what I was doing when I started Knock Knock in 2002. I had still less idea where it would—or could—go. Back then, I didn’t even know a single entrepreneur.

I launched Knock Knock out of my desire to write and design at the same time. I saw a keen lack of products in the marketplace that had voice, personality, and smarts. Target and the other big-box retailers were just starting their rise, and irony hadn’t yet made its mark on the gift industrial complex. Instead, the trend ran to wares that could sell to the widest swathe of consumers, by necessity, then, catering to the lowest common denominator. Bland. Safe. Middle of the road.

I wanted to do something different.

I made the assumption that there were enough smart, reality-based (vs. gold-cursive-writing-and-cute-bunnies-idealism-based) people out there to support a tiny little company on the left coast speaking distinctively and with multisyllable words. Unlike my high school party self, I didn’t need Knock Knock to appeal to everybody.

But as it turned out, we appealed to a lot more people than I imagined. The moment that hit me was the January 2005 New York International Gift Fair, one of our big tradeshows. We’d just come out with Wheels o’ Wisdom (“Cordless Search Engines for Life!”) and positioned a hanging display of the first four titles on an aisle-side table. One after another, seemingly Knock Knock–atypical customers—boutique-owning women of a certain age, Ultra-Orthodox Jews, hospital gift-shop buyers, people from the deep South (and those were just the ones I could identify by sight or sound)—stopped to point out “Yes, You’re Probably Dying: A Hypochondriac’s Guide to Worst-Case Scenarios” and laugh to one another: “Oh my god, my sister’s husband’s cousin’s dog is SUCH a hypochondriac! We have to get this for him!”

It wasn’t just the equivalent of today’s Brooklynites who liked what we did.

Soon we weren’t members of a tiny club anymore. Gift, card, and publishing companies with humor, voice, and a hint (or more than a hint) of subversion began stampeding into the marketplace. I had mixed feelings about this—on the one hand, I loved seeing the new players and experiencing a shift in the zeitgeist, enjoying kindred spirits all around me. On the other, I started to see oversaturation and copycatting.

Knock Knock continued to grow in all the ways I could have hoped for creatively (aka the front end), but—equally as important, I would learn—it also grew on the back end. Because oddly enough, for me creating products that sold was the easy part. It was the other stuff that brought me to my knees. But with a lot (a lot!) of trial and error (especially error!), we figured out how to manufacture and ship and warehouse and QC and sell and fulfill and bill and pay and balance our checkbooks—otherwise known as “financial statements” (another big old learning-curve ball of wax). And we figured out not only how to bring in revenue but how to be profitable on the bottom line (surprisingly critical, as it turns out).

I call that “the pipes.”

And at the end of those pipes is a retailer, a customer, a person getting a package delivered to their home. If those pipes don’t work, it doesn’t matter if you make the best stuff in the world—you won’t grow very much. Not to mention that you’ll have a really miserable time doing it (and trust me: those early years of setting up the pipes were so miserable—for me at least, and for the people who had the privilege of being Jen-misery adjacent).

In watching this community of like-minded companies rise up, over time there were two that stood out to me as beacons of distinct sensibility: Emily McDowell Studio and Sisters of Los Angeles.

While I first saw Sisters of Los Angeles in stores, I learned of Emily through . . . Emily herself! Some four years ago, about a year into Emily McDowell Studio, Emily learned she and I had a friend in common and asked for an introduction. We hit it off immediately—like-minded humorists, verbal and visual both, business curious, and with many similar personal experiences of being in the world.

I watched Emily struggle with the pipes, as I had. Then I watched her struggle some more. Every so often, I’d say, “Well, you could join us . . . ” But she wanted to do it on her own, just as I did when early potential acquisition offers came a-knock-knocking. So we became friends—you know, sort of like when you want to date someone but they cry “platonic!” But finally, in mid-July 2017, our love got real. I asked her one last time. And in that moment, she said, “You know, I just might . . . ”

And we were off to the mergers-and-acquisition races.

I couldn’t wait to tell Jim and Craig, Knock Knock’s president and publisher, respectively. They were as over the moon as I was, and the courtship (i.e., the contract negotiation, when you learn a lot about the other party, like how they handle conflict, whether they can compromise, what’s important to them, do they leave their dirty socks on the floor, etc.) was begun. We slid into the home base of our marriage on January 1, 2018, which, believe it or not, is a greatly accelerated pace for an acquisition. And it was way, way, way more work than either of us anticipated. With lawyers. And accountants. And analysts. And So. Much. Information.

With Sara Stein and Sisters of Los Angeles, things came about differently. Lucky enough to be an Angeleno for their first line of Los Angeles commemorative products, I’d seen Sisters products in stores right away, as soon as they launched in 2014. We do drive a bit in LA, and as SNL’s “The Californians” got just right, we also talk about it, even more than other people discuss the weather (and it’s no less compulsive or boring). To see “The 405”—one of our main freeways, and with the LA-unique definite article—on a rocks glass? Clever. To see tasteful, sophisticated souvenirs? Sublime.

Sara and I began a reciprocal Liking relationship on Instagram, as one does. I followed Sisters. I tagged Sisters when I set the table with their tablemats. Sara followed me back. And then I decided I wanted to meet this person. I do that sometimes—just reach out to a person I admire to see if they’d like to have lunch. (Not to “pick their brains,” though, a phrase I detest.) Serendipitously, Sara and I met the very same week of my “Let’s go for it” conversation with Emily. We talked. We talked some more. We didn’t close the place down, because it’s open all day, but we certainly thinned it out. I learned many amazing things about Sara and Sisters that day, but one thing that stuck with me was that Sara also was struggling with the back end. The pipes.

Knock Knock had been thinking about growing through acquisition, and Jim and Craig and I had tossed around a few “What about that company?” ideas, but this sprang into my consciousness fully formed: I knew right away that Knock Knock + Emily McDowell Studio + Sisters of Los Angeles was a powerhouse concept of complementarity. I breathlessly proposed the plan to Jim and Craig as the next step in our evolution, and they were immediately on board. This was no small thing. Many ideas come across our transoms, and we certainly can’t do all of them. Also, Jim tends to be conservative about potentially risky, resource-consuming stuff. But both he and Craig were all in.

Most important for me personally, however, I learned I could still regenerate my own rocket fuel. I started Knock Knock with rocket fuel, but after the first seven years of ninety-hour weeks, I was running on rocket fumes. By the time I could slow my marathon-length sprint, I was burned out. By the time I was no longer burned out, I was an executive. I wasn’t actually doing any creative, just leading it, and tending to legal and finance and HR and . . . well, I never wanted to be an executive when I grew up. I could do it reasonably well, but I didn’t love it. It did not serve to replenish the creative rocket fuel in my tanks.

But in the process of hitching up Knock Knock, Emily McDowell Studio, and Sisters of Los Angeles, I was once again creating—not a product, but something new, and new to me, rather than simply shuffling around the pieces of something that had become overly familiar. And even better, the creation was a collaboration of the highest order.

I created Knock Knock. Emily created Emily McDowell Studio. Sara created Sisters of Los Angeles. Now, together, we create ‪the Who’s There Group. We are more than the sum of our lady parts. Just you wait.

You know it’s a big deal when we make a video about it.