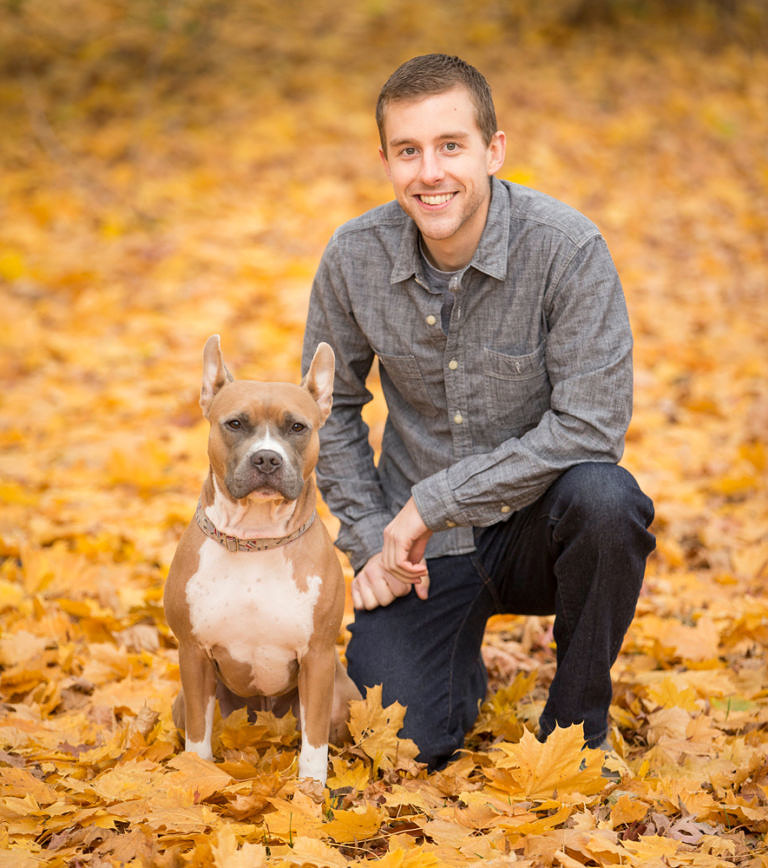 Introducing Ty Foster, the mastermind and animal photographer behind LICK—Knock Knock’s first-ever photography book! His silly yet charming portrait series lets you relish at the sight of dogs caught mid-lick. Ty’s inspiration behind LICK came to him when his dog Tech was at his studio during a client’s photo shoot. To distract Tech, Ty took a big glob of peanut butter and put it on his pup’s mouth and started shooting away. “The pictures were hilarious. That’s when I knew I had to take more photos of other dogs licking,” he said.

Ty hails from Connecticut and started his career as an insurance underwriter, but quickly realized photography was his true passion. He soon set his lens on animals. During his days as a photo editor for WWE, he created the concept for the WWE Unleashed project, featuring a variety of dogs dressed in wrestling gear to embody the superstars and their personalities.

Foster is now an internationally recognized animal photographer whose portrait series, both LICK and Timeout, went viral. From dogs, cows, snakes, and spiders, he’s photographed a good chunk of the animal kingdom. His latest project had him working with Alpacas on a farm, zooming his lens in on the niche industry of Alpaca breeding.

We had the chance to pick his brain on everything “Ty” (including his love for breakfast!) in our Q&A below!

1. How did you get into photography? I really began to take an interest in photography when I was studying abroad in London. It was the first time I actually took the time to research and invest in a camera. The entire time I was over there I brought that camera everywhere I went. It wasn’t until a few years later, when I had graduated from college and was working in an industry that I disliked very much, that I quit and pursued this wild idea of becoming a photographer.

2. Where do you typically find creative inspiration for your projects? And do you have any advice for aspiring photographers? Most of the ideas I’ve had for my projects just come from observing daily life. Most of us have been “kissed” by a dog and most of us who have owned pets have had them in the cone of shame. It’s nice taking ordinary occurrences and really focusing on them and polishing them up. As for other sources of inspiration, lately I’ve been really digging the work of Zaria Forman, Aaron Draplin, and Juan Carlos Paz.

3. Who are photographers you look up to and admire? Geesh, this a tough one. I’d say the top three are (in no particular order) Sterling Lorence, Andy Anderson and Nick Brandt.

4. What’s the most exotic animal you’ve taken photos of? Nothing too crazy, probably the chinchilla. It’s currently listed as a critically endangered species. The population has decreased by 90 percent in the last 15 years.

5. What are your hobbies outside of photography? Anything outside, really—backpacking, hiking, and skiing. I like staying busy. Is that a hobby?

6. You get to travel throughout the world for your profession. Where are some of your favorite places that you’ve traveled to? I haven’t really traveled anywhere crazy yet for a job, Most of my work has been domestic. However, I’d love to do a project on New Zealand sheep herding. From what I’ve read, seeing a working dog in action is like having 5 additional men on hand.

7. If you were to get a second dog, what kind of dog would it be and why? That’s a good question. I have no idea. Definitely a rescue, but as for a breed, I guess I don’t have any requirements. As for the “why,” rescues just have such a great temperament. I am not saying dogs from breeders don’t, but a rescue seems to have this sense of perspective and appreciation for what their life is compared to what it was.

8. How did you come up with the concept of your Timeout series? I was randomly sent a text message from my Dad and it was a picture of their two dogs sitting in the house with the “cone of shame” on. That’s all it took!

9. What Knock Knock product (other than LICK) is your favorite and why? Easy. Calm the F*ck Down. Simplicity at its best!

10. If you could cook a meal for any 3 fictional or real people, who would it be and what would you cook for him or her? Yvon Chouinard, Hunter S. Thompson, and Salvador Dali. I’d cook them breakfast. Honestly, who doesn’t like breakfast?

11. What are 5 things on your bucket list right now?

For more info on Ty Foster and his projects, check out his website or “Follow” him on Twitter and Instagram. You can also catch his work featured in ABC, BuzzFeed, DesignTAXI, PetaPixel, My Modern Met, Resource Magazine, Dog Milk, and Bark Post.