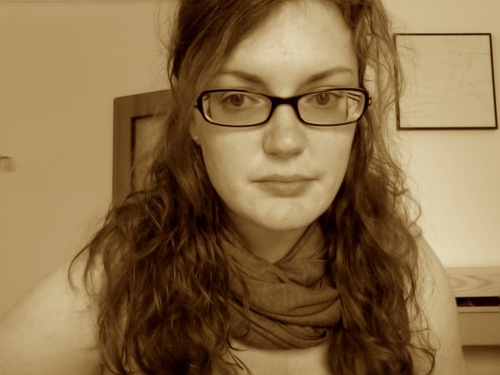 We’re number one fans of our fans. (We’re sure you know how much you contribute to our existence.) So we want to thank you all with a column dedicated to you: “Friendly Fridays”! Once a month, we will be featuring a certain friend and their Knock Knock stuff-related stories.

Linda is our first Friend of the Month who currently lives overseas—Germany, to be exact. Sadly, she did not have a photo with her fave Knock Knock product on-hand, but all is good: “When we moved last June, I purged a ton of my office stuff because we kept hearing how small German flats were. So now I’m sans cool office stuff and using whatever I can get my hands on—which is generally yuck, for the lack of a better word.” But we appreciate the love, and you can check out her updates on the daily, @linderooni. (On a related note, our head honcho and publisher just came back from Deustschland!)

Location: Wiesbaden, Germany. It’s about a half-hour west of Frankfurt, and the capital of the Hessen state. It’s a beautiful city and I love it here.

Favorite Knock Knock product: My absolutely favorite Knock Knock product is Squid-o the Clump-o-Lump. In truth, I’m pretty scared of squids. I saw a scale model of a giant squid when I was a kid, this one, and it kind of melted my brain, as I couldn’t comprehend how truly big it was—not to mention the suckers, tentacles, and beak! *Runs screaming.*

However, this flavor o’ squid is adorable. With Squid-o, I hope I can take advantage of my fear and show “Short Man” (my two-year-old son) how cool undersea creatures really are. It should give us an opportunity to learn as well, and bond and build some fun zoo memories.

Knock Knock Story Time: My friends are creative types (obviously, since we’re mostly designers!), and as a result, we tend to send each other well-designed products. One of my favorite gifts was a Knock Knock card, from probably around 2004-2005—something like that! My pal had recently moved away for grad school and I missed him a lot, so he sent me a “thinking of you” card, just because.

The card read something like (forgive my spotty memory, it’s been affected by grad school, having a kid, and the aforementioned squid-melting), “You are . . .” and had a billion little tick boxes, each with a different descriptor. My friend had meticulously gone through the list and checked everything that was “me,” and I was so flattered that he took the time to do that, and that a stationery company had thought of such a thing! I thought it was such an awesome concept, and I’ve pretty much loved Knock Knock ever since . . . Oh, and the Slang Flashcards. Another friend had a set and it was hilarious to read the “use it in a sentence” examples!