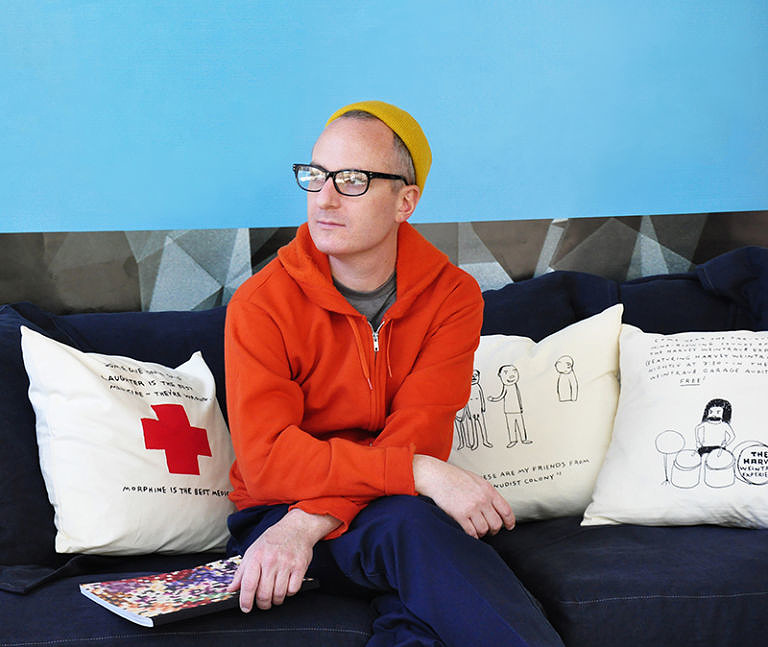 In terms of wit, humor, and creativity, Knock Knock has met its match in Dan Golden—artist, designer, and wearer of knitted fisherman beanies. Dan’s vast repertoire of work is a nifty combo of contemporary, polished sophistication and quirky commentary. His design sensibility stays true no matter the medium or scale of the project, as evidenced by his line of clever tabletop ware and home decor for CB2, imaginative wall decals and clocks for BLIK, sleek museum seating model, and uniquely illustrated Apology Postcards—just to name a few. It’s no wonder press like The New York Times and Apartment Therapy have taken notice of his stuff.

Raised in Southern California, Dan trekked to San Francisco for college, then became a New Yorker for 15 years. “New York is amazing,” he points out. “I’m probably the first person to describe it that way.” He recently moved back to Los Angeles, where he’s learned to channel his candy addiction into creative expression. A sugar rush actually sparked one of his latest cheeky creations (and our new book release): “I’d left a bag of gummy bears by the window in my studio one day, and they all kind of melted together in the sun,” he says. “It looked like a gummy bear orgy, which struck me as funny, so I snapped a photo. It got me thinking of other gummy bear scenarios I could explore.”

He compiled these scenes into The Gummy Bear Book, an amusing photographic collection of gummies captured in their natural habitat. Since the publication of The Gummy Bear Book and Sorry I Farted and 24 Other Apology Postcards, Dan has become Knock Knock’s creative director. We’re convinced it’s our communal buckets of candy and chocolate that lured him in.

1. When did you realize you had a gummy addiction? Well, I’ve always had a candy addiction, but when it comes to gummy candy, in particular, I’d have to say within the last couple years. It started innocently enough–I would pick up small packs of gummy bears whenever I saw them in the supermarket. But pretty soon I moved on to one-pound bags—that’s when I knew I had a problem. (Unfortunately, there’s no gummy-candy support group.)

How long did it take photographing all these different gummy bear scenarios? It actually took a couple months to get all the shots. Partly because I was in the middle of moving from New York to Los Angeles while working on the book.

What was the most challenging part in creating this book? The biggest challenge was not eating all of the props before I took the shots! Seriously though, one of the biggest challenges was trying to balance and stack rows of gummy bears on top of each other for the pep squad shot. I could only get two rows, but Knock Knock wanted at least four. It got a little tense, but we worked it out.

4. How did you get into design and illustration? Did you always know that was what you wanted to pursue? I drew a lot as a kid and studied painting in college, so it was kind of a natural progression. I still enjoy making art, but there’s something about coming up with design ideas/solutions, and just using pen and paper that feels right to me.**

5. Your designs, concepts, and illustrations span various products and mediums. What advice can you give fellow creatives who would like to follow a similar path? My path has been a bit meandering, so I wouldn’t necessarily suggest following my lead. But, for any creatives who are interested in pursuing a similar path, I would say explore everything that interests you. You may not get to your destination quickly, but you’ll have gained a wider perspective, which will benefit you in the long run.

Develop and acknowledge your own unique voice and approach. Do things your way, and keep doing them better. Don’t waste your time comparing yourself to others. Most importantly, be clear and specific when answering questions rather than giving vague, general responses.

6. Where do you typically get inspiration from? So many places! I check out sites like It’s Nice That and Design Milk, or look at Instagram and Pinterest. I love the look of those old French New Wave films and the worlds created by auteur filmmakers. Also, old movie posters and vintage stuff. I also like things that have a patina to them. Music is also a great inspiration for setting the mood or tone. Fashion is another place—I love looking at W Magazine for visual and mood inspiration.

7. What are 3 things on your bucket list right now?

For updates on Dan’s projects, check out dangolden.com. You can also follow Dan and his illustrated cartoon Shiddy (seen above) at @dangoldenstudio on Instagram.

*That’s what you think, Dan!