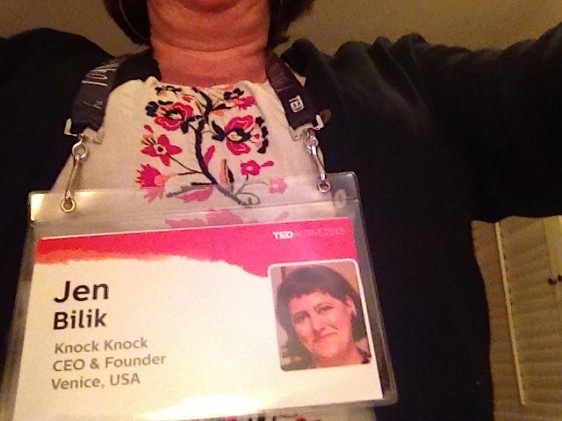 Yours truly with the world’s largest nametag, also known as “the license plate.” Bonus? You can’t forget to take it off.

During the week of February 25, I was lucky enough to attend the TEDActive conference. I’ve been a fan of TED Talks since I first saw them on my very first Virgin American flight (both things were great improvements in my life), and I’d heard of TED for five or so years before that, but it sounded like kind of a wonky, exclusive, male-leaning thing. A friend of mine, Grace Hawthorne, formerly publisher and co-founder of ReadyMade magazine, was attending as an exhibitor in the Lab area with her new company, Paper Punk, and she said, “You should come!”

Well, that’s all it takes to get me to spend a few thousand bucks (or, more accurately, to get Knock Knock to spend a few thousand bucks) and cancel my life for the week—just press Enter. No need to actually look into what TEDActive is, vs. the main TED Live conference; I somehow made up in my head that it would be like an event version of the Exploratorium (one of my favorite places in the whole world). You know, because Grace was in the “Lab” and all.

TEDLive has been in Long Beach for the last five years, post-Monterey, and TEDActive in Palm Springs, formerly Aspen. In 2014 they’re going to move to Vancouver and Whistler, respectively. For maybe only the third time in my life (not very many for an Angeleno), I drove to the Palm Springs–adjacent La Quinta and checked in to the La Quinta Resort, notable for being the one of only two hotels in the United States to have their towns named after them. (I learned this important piece of trivia from the in-room hotel instruction guide, which I always read from cover to cover upon checking in. Really.)

I sauntered off to register and pick up what turned out to be a LOT of swag. Nice swag. Expensive swag. Including a Jawbone UP Band, no less! (So far I neither “know [my]self better” nor “live better,” but I don’t blame them. If I had to say, though, I prefer my Jawbone Bluetooth speaker to the UP Band.) And the crowning glory? The largest name badge I have ever seen in my forty-three years on this earth, which I later learned was nicknamed “the license plate.” At least I never forgot to take it off at the end of the day.

For the first session, I entered the main hall, a large conference area outfitted with couches, easy chairs, and beanbags provided by Steelcase (one of the triumvirate of my favorite furniture companies, joined by Herman Miller and Knoll) and two large screens on the wall. Imagine my surprise, given my Exploratorium theory, to learn that TEDActive is (I thought at first) merely a simulcast of TEDLive. “I came all this way and paid money just to watch video I could have watched on my computer?” I thought, with my characteristically open mind.

And it was amazing.

Between the crowd energy, the comfy seating, and the impressive telecommunications setup, it may just have been better than sitting in the auditorium seating of TEDLive, where I’m guessing that most people are only able to see the close-ups on a screen anyway, like at a Bruce Springsteen concert.

I’ve been fortunate to have a few experiences in my life that I characterize as “amusement parks for literate, intellectual adults.” (Grateful Dead shows don’t count, even though I did see god and an astonishing number of prisms when I was in college.) One was the Venice Biennale, a city-wide international art show that takes over all of Venice (Italy), for which I got to attend the festive opening, or vernissage, meaning lots of good parties with free booze. Another was my 2011 visit to Design Indaba, in Cape Town, South Africa, where I was honored to be a speaker. These events are like county fairs for people who are into culture and intelligence and not so much concerned with prize heifers.

I asked the people I met—and everybody was so invariably friendly and welcoming that I began to plot the utopia into which I would transform my neighborhood upon returning—why they’d chosen TEDActive over TEDLive. While many of them professed to having a bit of a chip on their shoulder about not having been accepted to attend TEDLive, a competitive entry given that there are so many returning attendees from 30 years of previous TEDs, they also extolled the more informal, sociable, partying atmosphere of TEDActive, which takes place on a shared resort campus among 600 people, vs. the intellectual celebrity–driven, exclusive, private party­–oriented, auditorium-seaterly 2,000-person TEDLive. One LA acquaintance of mine who’d been to both, Eames Demetrios, whose Kcymaerxthaere is one of the most interesting cerebral pieces of long-term performance art I’ve ever seen, indeed characterized it as above, and with the benefit of firsthand comparison between both, he chooses TEDActive, where he can see and talk to friends rather than miss running into them amid the hordes of TEDLive.

As some of you may have gleaned from (a) Knock Knock; or (b) past posts, I am a sucker (really, more a geek) for good organization, systems, and logistics. On that front, I was blown away by the TED organization. The parties, dinners, food, lunches, meet-and-greets, app, etc., were so top-notch that it made me want to come work for them.

But that’s all mere intro. Now on to a smattering of the talks themselves, those that particularly impressed me, in their conference order (note that few of the talks have been uploaded to the TED site yet; most links are to talk summaries, but I’ve bolded those links that are actual talks):

So overall, what was TED’s impact on me? Believe it or not, it gave me hope. I saw serious people grappling with serious issues in productive, practical, apolitical ways. I witnessed the passion of people whose careers are callings. There were only a few people I met whom I didn’t like (a record for me). TEDActive made me want to engage more fully in the world, and even though that impulse faded away like my Palm Springs tan, it’s still reassuring that it’s actually possible for me to feel it.

I was accepted to attend TEDLive 2014, but I didn’t tell anybody at TEDActive 2013. Secretly I’d rather be at Whistler for TEDActive 2014—resort, beauty, snow, togetherness, some of the great people I met—but I feel like I have to just try nursing from the mother teat to see what it’s all about. I have a feeling that the downside of going to TEDLive as a novice is going to be social isolation because I’m guessing I won’t be invited to the Nobel Prize–winner dinners, as I don’t know any. I do have one potential ace in the hole, though—an international VIP who may be speaking at TED 2014, whose wife I’m good friends with. If that ends up working out, I am going to ride their VIP-soiree coattails so hard they’ll wag.

P.P.S. I don’t know why I didn’t think to take more pictures. It never occurred to me that I might want to share the experience, say, by blogging about it.