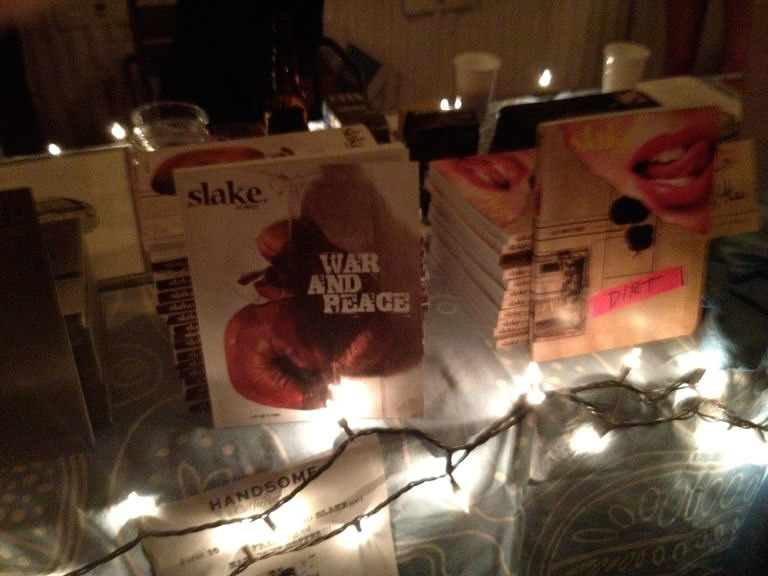 As you know, we at Knock Knock are passionate lovers of pencils, paper, and printing presses. I was therefore thrilled last Friday to attend a party for Slake, a new Los Angeles literary quarterly that proudly exists only in paper form. That is, it exists only in real life.

Slake started in summer 2010, and is currently on its fourth issue (“The Dirt”). The journal is new, but has already won several awards (and hit the Los Angeles Times’ bestseller list) for its content—which combines visual art, photography, poetry, long-form journalism, fiction, oral history, and memoir. Its founders, Laurie Ochoa and Joe Donnelly, were formerly the editors of LA Weekly. (On a personal note, I worked with Joe and Laurie for years as a writer and editor for the Weekly, so the party was a homecoming for me.)

Slake is all about fostering a community of writers and artists who are deeply rooted and in—and in love with—Los Angeles, and it’s also about staking a claim for paper as a beautiful and viable medium. As their website proclaims, “Slake sets a new template for the next generation of print publications—collectible, not disposable; destined for the bedside table instead of the recycling bin.”

As previously mentioned, paper is something that exists only in real life. You know something else that only exists in real life? Free beer.

Quantities of free beer were available at this party; the evidence of this is in the blurry, slurry photos I managed to either take or pose for. It may or may not be worth mentioning that free pie was also served by Suicide Girls.

Besides live music and dance performances, other stuff on offer included an exhibition of beautiful photographs of the Occupy L.A. encampment; video footage from the LA riots; and a station where people could create album art for the new vinyl LP by Detective (a musical project from Guided By Voices member James Greer, who is also a Slake contributor).

Laurie Ochoa says that Slake is meant to be enjoyed slowly, in bed or otherwise in a state of repose—and then kept. It should be noted, another advantage to the print-only format is that after inevitable disaster strikes, taking down the “grid,” and we are all shivering in our homes with candles and limited water, Slake will remain to provide us survivors with hours of meaningful, thought-provoking, mind-enriching entertainment. Hey, it’s L.A. Anything could happen.