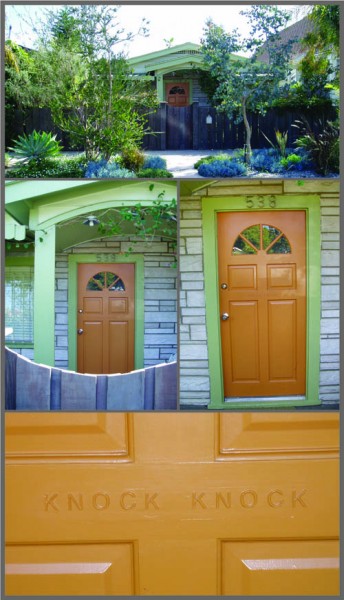 Knock Knock was formally incorporated on January 1, 2002, but we didn’t release our first products until October 2002, so somewhere in between is where I count our anniversary. In 2012, we’ll be ten. Ten! Just like humans think they’ll never get older and it takes a long time to reconcile oneself the fact that one is, indeed, older, I still think of Knock Knock as a young upstart and have to remind myself that in fact we’ve been around the block and there are many companies younger than we are.

I was procrastinating about starting a book when I started Knock Knock. For a while I’d been saying to myself, When I finish the book, this is what I’ll do. Finally I admitted to myself that, in all my procrastination (during which I made all kinds of things that would later become Knock Knock products or inspirations), I was actually pursuing this nebulous company idea and not writing the book. One day I was sitting in my living room thinking, If I were to do this, what would I call this company? My eyes swept around my living room, where I was sitting on the couch with my laptop. My front door was open so that Maisie, then just under a year old (she’s eleven now, my sweet girl with the rapidly whitening white muzzle) could run in and out of the house to greet passers-by.

On my front door, which was painted in what would later become Knock Knock orange (my orange phase had just begun) were plastic letters spelling out “KNOCK KNOCK.” (On the inside of the door I’d mounted “WHO’S THERE”). In one of those fits of procrastination, I’d taken letters more familiarly used on those black felt-corduroy-ish grooved signboards, cut off the prongs that slide into the grooves (in the process slicing up almost all my fingers with my X-Acto knife, and not for the first time), glued them to the door, then painted over them, because if you’re going to do something cute, it’s got to be subtle, right?

As I did my “What to call this thing?” sweep around the room, my eyes landed on the KNOCK KNOCK, and I loved it immediately. It evoked childlike play and glee. It was almost compulsively call-and-response (“Who’s there?”), which to me seemed the height of interactivity. In its association with joke-telling, Knock Knock was all about humor. I knew that the repeated word would make for a good logo and liked the letterforms—”KNOCK” is almost a palindrome, with the N and C offsetting what might otherwise constitute cloying symmetry. And of course Ks are pretty interesting-looking letters. Finally, I thought it would be loads of fun answering the phone “Knock Knock” (I probably should have anticipated, however, that after years of this, we’d get a little bit sick of people responding, “Who’s There?” and this, of course, would be all my fault, not theirs.)

Soon it was time to incorporate as Knock Knock with California’s Secretary of State. I found out something astoundingly unlikely—there was a defunct law firm in the San Fernando Valley that had incorporated under Knock Knock. I never found out why (and assumed that part of the reason they were defunct was because of the name-business mismatch), but when I wrote them a sweet, naive letter asking their permission to share the name, I got, naturally (these were lawyers, however defunct), a cease-and-desist letter.

There was a brief period of brainstorming about alternate names (Whorligig was one of them—don’t ask), but fortunately we were able to file as Who’s There Inc. D/B/A Knock Knock. (D/B/A means “doing business as,” kind of an official and acceptable business alias.) There was someone squatting on knockknock.com (and still is—again, don’t ask, as it adversely affects my blood pressure), and minutes after I looked at knockknock.biz someone else purchased it (you guessed it—don’t ask, but obviously I was able to buy it, though we still wobble between that and knockknockstuff.com, another don’t ask).

About a year and a half after starting the company, I moved away from the house with the KNOCK KNOCK on the front door (though would over the years would run people by so they could see the founding inspiration of the name), but strangely enough, in April 2011, I moved into the house next door. So now I see it almost every day. Unfortunately, the new tenant hasn’t kept the house up like I did (I’m an inveterate home-improver, even in rentals), and the orange paint has worn off the letters, making them less than subtle and hence annoyingly cute as well as cheap and plasticky looking. I love my new house, though, and it feels like coming home to live next door to the house that sheltered so many good things. I have a fantasy of taking over that house, too, however, so maybe someday I’ll be able to restore the orange paint to the plastic letters that launched a very, very small empire.