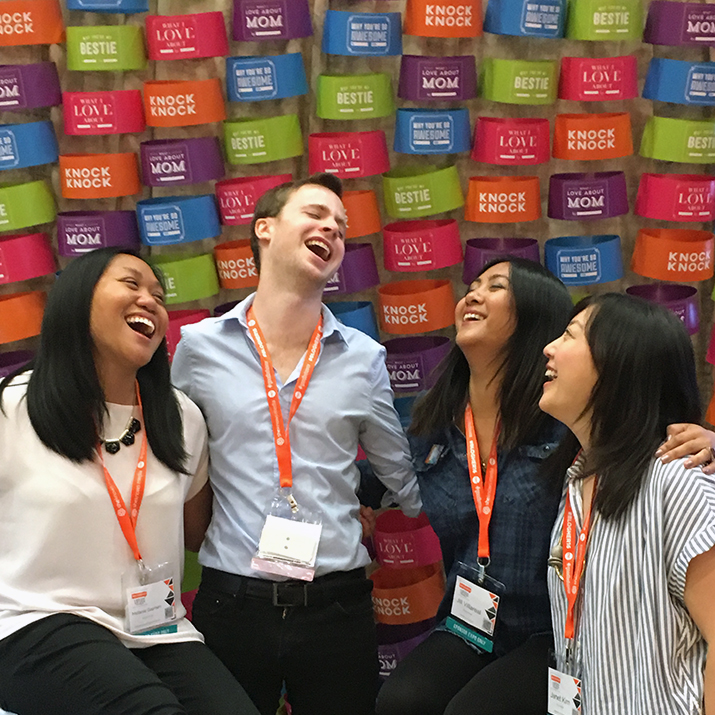 The Knock Knock team gravitates toward creativity, inspiration, and free food samples, so we were definitely excited to attend SheKnows Media’s #BlogHer16: Experts Among Us for the first time! With over 3,000 attendees, BlogHer celebrates content creators nationwide, and this year the conference took place in the City of Angeles’ L.A. Live. We shared some of our favorite moments from the conference below.

1. KNOCK KNOCK’S BOOTH
We had the pleasure of meeting and chatting with the many bloggers, entrepreneurs, tastemakers, and brand ambassadors who stopped by our booth. We carried our new tagline, “Say Something More,” throughout our booth’s concept and design. Knock Knock fan-favorite items that say something more unexpected and irreverent were on display, like Calm the F*ck Down: The Only Parenting Technique You’ll Ever Need, Bathroom Guestbook, and 5 Days a Week Paper Mousepad.

Our booth was also dolled up with a bright and bold Fill in the Love photo wall, based on the covers of our beloved Fill in the Love® Journals. Bloggers loved snapping photos in front of it—helping us spread the love!

Loving the color scheme of @knockknock stationary. It’s right up my ailey. #blogher16

One of our favorite parts of our BlogHer home base was the Knock Knock sandwich board! Our friends at BLIK helped us craft this maple-wood beauty.

2. SARAH MICHELLE GELLAR KEYNOTE
When Sarah became a mom, her priorities shifted—she moved away from the silver screen and focused more on her family and entrepreneurial endeavors. Along with co-founders and friends Galit Laibow and Gia Russo, Sarah launched Foodstirs last year, a culinary brand that creates non-GMO baking mix kits, accessories, and items that center on family bonding time in the kitchen. A portion of Foodstirs sales goes toward a chosen charity each month, like No Kid Hungry.

Sarah chatted about the challenges of starting Foodstirs, despite her fame—including funding. However, we tried a Foodstirs’ Chippy Cookie sample and it was delicious, so we’re on board!

Her husband, fellow actor and chef Freddie Prinze Jr., also attended BlogHer and signed copies of his first cookbook, Back to the Kitchen. And yes, there was a very, very, Comic-con-esque long line for this.

3. SHERYL CROW KEYNOTE
After being diagnosed with cancer in 2006, Sheryl really focused on healthy, organic, chemical-free eating and cooking for herself and her two sons. She also shared how breast cancer made her realize the importance of not only self-care, but mentally putting her needs first. She quoted The Four Agreements: A Practical Guide to Personal Freedom, which helped shape a framework for her life while battling cancer, alongside using meditation as a regiment. Regarding her music career, Sheryl’s no longer touring (she has never stopped touring since her first album that released in 1985), but she’s releasing a new album next spring that will feature Stevie Nicks and Keith Richards.

Sheryl stopped by our booth and thought our What I Love about You Fill in the Love Gift Box was super sweet!

4. MAYIM BIALIK KEYNOTE
Actress and neuroscientist Mayim Bialik’s keynote focused on the founding of her online community, GrokNation. She started the blog as a platform to promote current issues and inspire the mobilization of individuals. GrokNation topics include feminism, family and parenting, and culture.

“If just one person shared [a GrokNation] article or commented on an article, then it’s worth it because it helped and affected that one person. That’s really all that matters to me,” she said.

With a Ph.D in neuroscience under her belt, the Big Bang Theory star joked that she was the only person on the show that actually knows what her lines are about. She also shared that she’s working on a children’s book.

5. DANCING PEA
A few aisles away from us on the expo floor, we caught the eye of a giant pea dancing to John Lennon’s “Give Peace a Chance” (altered to “Give Peas a Chance”). Turns out this pea is the mascot for Garden of Life, an organic plant protein powder. You go, dancing pea, you go.

6. SESSION: CRAFTING YOUR PITCH & CRACKING THE P.R. CODE
Longtime friend of Knock Knock Paula Rizzo of The List Producer and senior health producer at Fox News led this helpful and hilarious panel alongside Lucrecer Braxton, SheKnows Media events programming manager and Hello Friend podcast founder and host, and brand strategist Terri Trespicio. Both Paula and Terri co-founded LightsCameraExpert.co, an online resource that drills down on how to pitch your brand.

They shared tips on how to pitch stories to the media, focusing on originality and creating content that’s fresh, inventive, but still relevant to the outlet’s audience. A key takeaway is to “niche down” on your story’s angle. They also shared an intriguing story-pitch example for Pokémon Go—did you know that this game is actually helping individuals with mental health issues? We didn’t!

7. DOGGY BREAK (AKA AIR BUD ENTERTAINMENT BOOTH)
The creators of those basketball-playing-dog movies have their own entertainment studios now. We got to meet the star of their latest film, “Pup Star,” “Tiny,” who was all kinds of adorable.

8. SESSION: CONTENT CREATION FOR THE MOBILE AND DIGITAL ATTENTION SPAN
It’s happened—humans now have a shorter attention span than that of goldfish, according to The Telegraph and this BlogHer panel. The session ruminated on the fact that a digital-savvy human has the attention span of 8 seconds in comparison to a goldfish’s 9 seconds. WTF!

The panel shared how to get the most out of your articles, videos, and photos in a mobile-heavy world. In short: get right to the point quickly, and have a killer headline and thumbnail image.

9. FREE BABYBEL® CHEESE
As lovers of cheese, we were enamored by Mini Babybel’s different wheels of flavors they gave out like hot cakes (hot “cheese” cakes?)—original, gouda, mozzarella, light cheese, and white cheddar. We would’ve posted a pic, but we ate them all before we had a chance to take one.

Thanks to everyone who stopped by our booth! Want to work together? Send us a message and let’s talk.