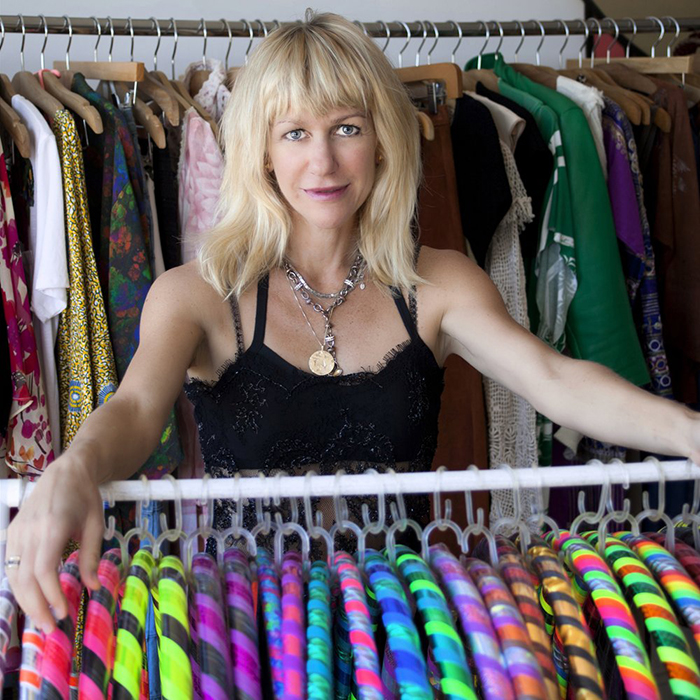 Knock Knock’s newest book, In Heroes We Trust: Street Artists and Their Heroes, hit shelves this summer. In Heroes We Trust features the work and inspirations of art’s unsung heroes—street artists from around the world. In Heroes We Trust’s namesake is a boutique, owned and run by the book’s visionary and curator, Neely Shearer. The boutique nestles itself a few steps away from the hustle and bustle of Abbot Kinney (and down the street from Knock Knock’s Venice Beach, California abode).

Neely opened In Heroes We Trust in the midst of wanting to resume her work in the fashion world while mixing in her love for street art. As a longtime habitué of street art, Neely created a “Heroes” theme for her store, inviting street artists to deck her store’s walls with various mediums—wheat paste, spray paint, stencils—into a gallery of work dedicated to heroes and those who continue to inspire them.

The onset of In Heroes We Trust began with a routine Venice dog/Paco walk. “One night I was outside the shop with friends when a neighbor asked if I knew anything about an artwork leaning against the wall in our alley. It had accidentally been left out after one of our art openings, and miraculously hadn’t been taken,” Neely writes in In Heroes We Trust’s preface. “She decided to buy the piece and as we chatted, I explained my ‘Heroes’ project. It turns out my neighbor is Jen Bilik, the CEO of a Venice-based publishing company, and she suggested we do a book based on my concept.”

Neely’s mind moves like a pinwheel—vigorously circling through the creative ins and outs of her fortes: fashion, art, magazine writing, and entrepreneurship. Venturing across the globe and living abroad throughout the late-‘80s and ‘90s heavily influenced her passion for fashion and street art. She journeyed through Thailand, South Africa, London, and Hawaii, before settling in Shizuoka City, Japan with just $60.00 in her pocket.

Her time in Shizuoka City evolved from teaching English full-time to starting a lifestyle magazine, Jezebel magazine, and debuting her first women’s contemporary clothing line, Issho. Her designs found their way onto both American and Japanese press, including the second issue of Nylon, and the racks of stores like Barneys New York and Fred Segal.

Upon moving back to the U.S. in 1999, Neely opened her first store, Xin, in Los Angeles. Xin combined her love for up-and-coming designer clothing with one-of-a-kind accessories and art from around the world. After Xin closed its doors a decade later, Neely broadened her career by becoming a fashion design and marketing and sales consultant for emerging clothing brands, including RSN Boheme by photographer Randee St. Nicholas.

She opened In Heroes We Trust, her second boutique, in 2014 and launched her second clothing line, Parade. In Heroes We Trust honors the underdogs—those who take chances, and individuals who may not consider their work as heroic. We chatted more with Neely on her background with fashion, street art, and how the book transpired.

Q. When were you first exposed to street art?
A. I think just traveling around the world and being exposed to art, culture, and architecture. I love to go down the back alleys and the little dark roads and see what’s down there. I’m kind of a thrill seeker and I like to explore, so during my travels I’ve always been doing that.

Q. You traveled around Asia, Europe, and Africa. Were you discovering street art while you were abroad? What was that like, trying to track down street artists then?
A. In those days there was no Internet/social media, per se, so it was more of a challenge. I would ask the locals if they knew the artists. Usually people didn’t know, but you could always find somebody around who did if you were persistent, just going around knocking on doors. It was more word of mouth in those days. I do miss that . . .

Q. Were people surprised when you asked about specific pieces of street art?
A. A lot of people were, perhaps they just took the art for granted. If it was in their neighborhood they didn’t always really pay attention to it. They were curious why I wanted to know about it—like, “That? What’s so special about it?” It’s like when people tell me about visiting my In Heroes We Trust store, “Oh, I live right round the corner. I pass by all the time, but I’ve never come in.” I think when you’re in your own day-to-day environment, you may not necessarily pay attention to the details in your surroundings.

Q. Do you think that in that sense, when you travel, you are a fish out of water, and these different places allow you to see more clearly and notice this type of art?
A. I could say so, yes, for me anyway. When I go somewhere new I am very aware of my surroundings. It’s exciting to look at new things in a new place. It’s also necessary for safety when traveling alone, which I usually do.

Q. Your first clothing line was Issho [pronounced Ee-show]. What was its direction and approach?
A. My first collection in 1999 was based on a 200-year-old piece of kimono fabric I’d found in a Japanese second-hand store. I continued to use original prints and was known for that. My clothes are designed with women in mind who embrace fashion but whose independent spirits don’t allow themselves to take things too seriously. I want women to be able to put their own original spin/character on how they wear one of my dresses. Wear it to a proper brunch with your grandmother with her pearls and then later with a pair of motorcycle boots to a punk show.

Issho means “together” in Japanese. It’s always used in Japanese when planning to do something together with someone else. I knew I couldn’t make the clothes by myself—it takes a team of people who all do what they do well, forming a collaboration. It’s also a measurement for sake—1.8 liters is one “issho,” in fact.

Q. How did you decide you wanted to go from fashion design to opening up your first store, Xin on Melrose Ave.?
A. It was always a plan of mine at some point. I was already curating people, events, story ideas, and artists for San Diego underground magazine Revolt In Style and Jezebel magazine (in Japan). I’ve always been doing that in my life. So, it just naturally progressed. I knew when I started designing that I wanted to curate a shop with other designers and artists. I love mixing all the different elements together—people, ideas, art—collaborating. When I come across someone making something really wonderful, I want to share it.

Q. Was there something at the time that felt exciting and special to you about interacting with street artists and their art?
A. I really respect people who are bold and aren’t afraid to do what they believe in doing. Street artists create art in a very severe way. They have a message that they want to put out there even under some consequences. They don’t put parameters on themselves and they don’t see boundaries.

Q. Do you think most street artists have a message versus just an aesthetic expression?
A. The art is the message—an expression of the artist. Art sold at a gallery ends up in somebody’s home, in a workplace, or in a hotel. But street art is for the world to see. That’s a pretty big way to share your message—and to be open with yourself and others.

Q. After Xin closed, why did you decide to open your second store, In Heroes We Trust, in Venice?
A. I always spent so much time in Venice. It feels earthy (and a bit gritty) and I love to be by the ocean. I like the vibe—it’s relaxed. There’s a real sense of community and an independence about Venice. A lot of people don’t leave here, which says a lot. It’s their world, but once they let you in, you’re part of the family. It felt like the right match for me at this time in my life, personally and for the business/lifestyle I wanted to create.

Q. There are businesses, like Gjelina, that have street art on its exterior. Do you feel like that’s more in Venice compared to other Los Angeles neighborhoods?
A. It feels like it’s more accepted in Venice naturally because there’s been a long history of artists living here. “Yeah, you want to do something on my wall? Great!” It’s been a free-spirited place for a long time. I think that street artists are attracted to it because the Abbot Kinney area has been developing into this place to be “seen.” I think that the community welcomes the artists’ messages and embraces them.

Q. Can you talk about the process of making In Heroes We Trust? The people’s reception to it and response to the hero theme?
A. The experience working with the artists has been amazing in so many ways. I’ve learned so much and truly enjoyed this collaboration process. Most artists got the theme, but some artists didn’t see how their work fit into being heroic or that what they do fits with the heroes theme. It was a different way of thinking for them, perhaps because I don’t think they thought of themselves as heroes or that their message was heroic, necessarily.

Q. Did you immediately have a specific list of street artists in mind?
A. I knew I wanted to ask Ron English, Jef Aerosol, and Blek Le Rat to join right off the bat—they are a few artists who created the backbone of modern street art. Ron, for example, immediately understood what this was about. Having them on board set a high standard right away for the book. I wanted to mix the old school with the new school. It was also very important for me to study each artist’s character, what they stood for—I wanted to know more about them personally.

Q. Why support street artists, rather than tattoo artists or printmakers, or other creative makers?
A. Again, it’s the message, their message, and how they present it. I’ve always been enchanted and amused by their work. When I believe in someone and their work, I want to it get out there in the world so that people can get meaning from it. And I could see the trend that was coming—street artists gaining respect and acceptance with the public.

Q. What would you like the book to do? For the world and for the artists?
A. I want it to inspire people to be heroes—first to themselves. It’s really about inspiring yourself to do what you want to do. What is your purpose here? What do you really want to do? I think people look at the street artists and people in the public eye as people who are so far away from them. I’d like the conversation with oneself to be “They did it. And look who’s inspired them. I know this person they’re talking about. They started off somewhere too . . . ” Some of us have more advantages than others, but people with all the resources aren’t necessarily doing what they want to do either. So, we’re all born on the same level: human beings. We, especially in this country anyway, we have possibility. I hope that readers look at these artists and feel they’re inspired by them to live their lives heroically—and from there, to also inspire others. And so the cycle continues . . .

For more info on Neely or her store, check out her In Heroes We Trust site.