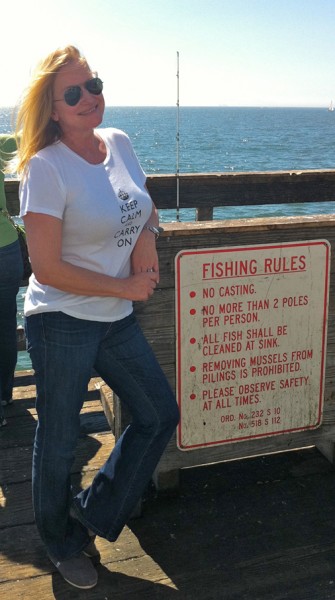 My husband and I were on the Seal Beach Pier (in my hometown!) this past weekend. Apparently it’s a pier from which casting isn’t allowed and on which people have attempted to use three or more fishing poles at once.

2. Originally from? Seal Beach, California. I’m a third-generation native Californian (well, maybe only second-gen—my gold-miner grandfather was a notorious yarn-spinner and claimed a different birthplace every time he was asked).

3. What the hell do you do all day? I research, write, and/or edit books, brainstorm new product ideas, write catalog and marketing copy, and create new versions of our existing products, among other things. There’s a lot of editorial collaboration, which I adore. Sometimes I’m on a single large project from start to finish, sometimes I’m doing lots of smaller projects, and other times I’m pulled in if we’re on a deadline. And I think about em-dashes and serial (AKA Oxford) commas a lot (I’m in favor of both).

4. Favorite thing about working at Knock Knock? Since everyone else has said “the people” (which is the real answer), I’ll tell you the other great thing about working at KK: the anti-boredom factor. Today I researched Marie Antoinette’s breasts, free-associated a list of drinking slogans, briefly powwowed with the other editors to come up with synonyms for “overachieving,” and proofed the marketing copy on a box of paper clips—all in my first hour. (Plus, those of us in the editorial horseshoe laughed really hard about something highly inappropriate, but that happens every day). Did I mention I have the best job in the world?

5. Favorite hobbies outside work? My husband and three kids, reading, Northwestern football (Go ’Cats!), cutting typos out of newspapers and magazines, and volunteering at 826LA, an immensely creative nonprofit writing and tutoring center for local kids. Oh, yeah, and Chelsea Winer, our manufacturing coordinator, turned me on to Smashbooks! I’m addicted.

6. Did your professional life exist before Knock Knock?Yup. I used to work in the movie business. I was a development executive and ran production companies at (among other places) 20th Century Fox, Castle Rock Entertainment, and Universal Studios until I took a break to raise the kids. I bought scripts, books, and story ideas, hired writers, helped shape potential material, and generally shepherded films through the development process. I love writers (and married one) and loved the business, but I don’t miss the hours or the . . . lifestyle.

7. Interesting factoid no one would know about you from first glance?

I’ve been a rotating Von Trapp and also a Main Street floater. I grew up in Orange County, California, which had a surfeit of unintentionally kitschy dinner theaters in the 1980s. One summer after high school I did eight shows a week in The Sound of Music as Liesl (sixteen going on seventeen) or Louisa (fourteen), depending on the day. The same summer, I worked across the street at Disneyland as a floater on Main Street. Any guesses as to what a Main Street floater does? (Hint: Has nothing to do with floats.)

8. What’s currently in your book rotation right now? Mmmmm . . . boooooks . . . I read lots of books at the same time. As Joe Queenan says, “Like any addiction, the insatiable desire to start new books provides immense pleasure.” On my nightstand or stashed around the house: Nicholson Baker’s House of Holes, Thomas McGuane’s Driving on the Rim, Tom Rachman’s The Imperfectionists, and Just My Type: A Book about Fonts by Simon Garfield. My current guilty pleasure is the latest Jack Reacher novel by Lee Child. I’m also rereading my great friend Katie Arnoldi’s classic Chemical Pink. It’s set here in Venice in the 1980s, when I first lived here.

9. Last movie you saw? Just caught the last hour of Inglourious Basterds for the umpteenth time last night. Love Christoph Waltz. What a great film. My husband quotes from it often. And now I know how to order three beers in Germany.

10. Favorite Knock Knock product? Well, I’m looking forward to our Spring 2012 release of It’s A Dog’s Life: A Journal of our First Year Together, but my favorite is still our The Complete Manual of Things that Might Kill You. It’s such a brilliant concept (not mine—our head honcho’s!), and so meticulously researched. It was also the first project I worked on here at Knock Knock, back in March 2007. By the way—this book is so powerful that while I was working on it, I came down with one of the illnesses we featured. Didn’t kill me, though.

11. Food or drink you couldn’t live without? Iced tea—I’m an addict. I don’t drink coffee anymore, just black tea, unsweetened, lots of ice. I like to have as many as a dozen large bottles of Tejava in the cupboard at all times. Like an alcoholic, if my supply gets low, I get a little anxious. I’ve been known to run out late at night to pick some up so I’ll have it in the morning.