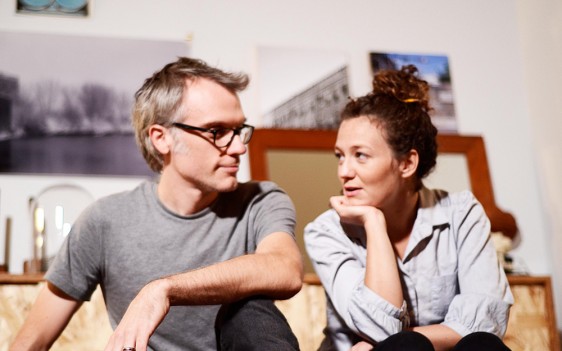 We’re psyched to introduce you to a handful of remarkable designers whose items will be featured during our tenth-anniversary party and “Fun & Functional” event with the American Design Club on November 10. We laud their work and can’t wait to see their stuff on display.

Colleen and Eric Whiteley are a duo based in Bushwick, Brooklyn in New York City. Their design principles include creating items that “strive to provoke thought, or at least make you smile.” Also, do note that an image of one of Colleen and Eric’s designs was aboard the Space Shuttle Endeavor’s last mission, making the pair’s work literally out of this world (or at least, out of our Troposphere). But, you know, no big deal. Check out their projects at colleenanderic.com.

1. How did you get started as a product designer? Did you always want to be in this field?

Eric and I met while studying industrial design at Pratt Institute in Brooklyn. After leaving school, I wasn’t sure what I wanted to do and had a myriad of jobs in all different fields, following lots of different interests. Eric has been building custom furniture since leaving Pratt. During this time, we were always sketching, building, and making projects for ourselves. In 2010, we finally decided that maybe we could make a living doing these kinds of projects, and officially launched our studio.

“Taper”—a candle sharpener that forms your candle for the perfect fit.

3. What’s the story behind your idea? What really inspired you to create it?

We get pretty into the functionality of objects—a lot of the best design solves a problem, even if it’s a small one. We realized we had a bone to pick with candleholders. Taper candles never seem to fit. The base is always too big or too small! You can spend half of a dinner party trying to get the candle to stay in place. Why fuss?

4. What was the hardest or most challenging part of designing this product? Any creative bumps in the road you dealt with?

Once we decided on a concept the both of us liked—a candleholder with the ability to shape the base of a candle to fit perfectly—we realized that each of us had a very different idea of what the product was; what it looked like, how the “sharpening” function was going to work, material, size, etc. Eric’s first thought was to make the candleholder in wood, but we switched to metal pretty quickly when we realized we didn’t want anyone’s product turning into little charred embers. After debating the details, we arrived at a sleek, minimal form, with its function inspired by a pencil sharpener. Who doesn’t love a nod to the good ole days of grade school?

5. How do you organize your work process to balance fun and functionality in your own daily grind? Any tips you’d like to relay to fans of Knock Knock?

We live where we design. It’s one large open space, which allows us to spread work out everywhere. Having no walls lets us work on different scale projects just by rearranging furniture in the loft. We like having the comforts of home in our workspace and it’s helpful to have the projects we’re working on be all around. Living with our prototypes encourages us to think about projects even when we aren’t working.