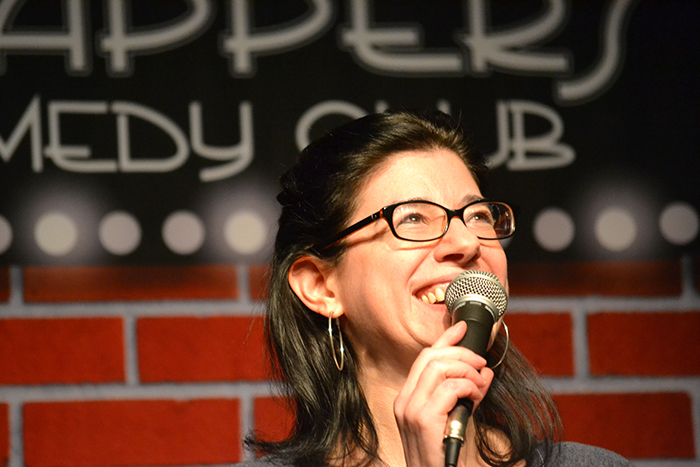 Dana Eagle is not your run-of-the-mill comedian. For instance, we assume very few comedians have had the opportunity to be on the receiving end of the legendary Roseanne Barr saying she wants to “hear more about you, growing up and becoming the odd person that you are,” in front of millions of viewers across the world. Dana already has that under her comedic belt.

The Last Comic Standing veteran and author of How to Be Depressed: A Guide has been a stand-up comedian for over fifteen years. Her no-frills, fearless humor encompasses topics like her LGBTQ lifestyle, her personal struggles with depression and mental health, and even her recent battle with lymphoma. Also, throughout her comedy tenure, she’s performed shows with the likes of Bill Maher, Maria Bamford, and literally brought laughter to troops in war zones, including Iraq in 2007.

“I wanted to absorb everything I could both about other parts of the world as well as people, in general. I’m always curious as to how people came to where they are, and why they made the choices they did. This was especially true of the military, Dana said. “I don’t come from a military family and until those trips, I didn’t fully understand the sacrifice that was made. It was always a little embarrassing because they’d always thank us. Each time we landed at a new base, they’d say, ‘Thank you for coming. Thank you for leaving your family.’ And I’d reply, ‘I don’t even like my family.’”

Dana’s How to Be Depressed: A Guide shares wry wisdom, and “therapeutic” activities like finding your “depressed pose” and filling out a bad-poetry generator. Most importantly, the book teaches how expressing yourself and using humor can make depression feel more bearable.

1. We’re sure you get this a lot, but how did you get into stand-up comedy? As the legend goes, I was in musical theater and they asked me to leave. I was on tour in a musical but had the only non-singing role. I explained to the cast that I actually could sing (and perhaps offered demonstrations). Finally, they said, “No you can’t. And you’re annoying to be on a bus with.”

Typically, I’m more reserved than people would expect, certainly more than what’s on stage when I’m performing stand-up. But once I’m comfortable, I can be “spirited” or, as others may choose to refer to it, “annoying.” But I guess some of my quips were sharp enough that a couple of people pulled me aside and said, “You should give it a shot.” A few months after I returned home, I took a class and ever since, the singing stays in the shower.

2. Any tips for budding comics out there? Yup. Here’s a short list:

Oh, and check your fly.

3. Other hobbies outside of stand-up and writing? I belong to a book club that would probably be more accurately described as a drinking club that orders books. You’re welcome, Amazon.

I don’t live a jet-setting life but stand-up has afforded me some wonderful travel (and some not-so-wonderful travel) as well as plenty of new experiences. My “time off” is about being with friends in ordinary ways. I suppose I’m a little backward like that.

4. Aside from Last Comic Standing, you’ve been on The Late, Late Show with Craig Ferguson, Comedy Central’s Premium Blend, Comics Unleashed, and continue to perform around the country. What’s your process for preparing for shows? Well, I would refer you to pg. 66 in How to Be Depressed: “How to Leave Things Unfinished.”

Also, it depends on what type of show it is. When it’s a job, then I have to put aside what I’m developing and do the “best of” [my material] or whatever suits the crowd. If it’s a television opportunity, then it becomes hitting time and what I can get past Broadcast Standards and Practices. People would be surprised—it’s not just about the swear words. It can relate to name brands, suggestive material, trigger words. One show called my manager and said, “She can’t make fun of bipolar people!” My manager said, “But she’s bipolar.” And they said, “Oh, well then that’s okay.”

Around town, my sets are a mix. Often I have the club light me halfway through so I can use the second half for new material. I generally prefer working on stand-up after a show. It’s quiet. I like heading to an all-night diner and sitting with my notes.

5. Any advice that you can give to those of us also struggling with our mental health? At the risk of sounding high-minded (or for the purpose of), I think How to Be Depressed is an antidote to what Andrew Solomon, author of The Noonday Demon, refers to below as “trying too hard” so if I may borrow:

“It is true both that very little depression is entirely the fault of the sufferer, and that almost all depression can be ameliorated with rigor . . . If you push yourself too hard, you will make yourself worse, but you must push hard enough if you really want to get out.”

Another piece of advice is a little trick from my shrinky dink. In a moment of crisis or paralysis, she asks, “What is it you think you need right now?” This redirects my mind from whatever issue that it’s snacking on at the moment toward what is called “self-care.”(It’s hard for me to use that expression without rolling my eyes at myself.)

And finally, if I may offer one last strategy: For a period of time, when my health insurance was unable to provide . . . well, let’s just say they were fined by the state, I used this website. There’s nothing to buy, no memberships, no gurus to worship. It simply offers information and simple strategies that address the different types of automatic thinking associated with depression and other mental health issues. To this day, I still visit the “Solutions” section and print out a couple of worksheets for myself.

6. Favorite Knock Knock item (besides your book) and why? Inconsequential Dilemmas is engaging, funny, and a terrific group read. It feels like one of those games we played in the car before there were iPads. But now I see that there’s Consequential Dilemmas so check back because that might top it.

7. What are 3 things on your bucket list right now? No bucket list. There’s now, next week, and a few things I’d like to try (like tightrope walking) but if I don’t, then I’m good with what’s on the agenda.

All photos by Dana Eagle.