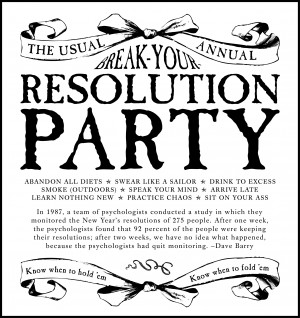 A few years ago, my cousin and I threw a party founded on truth and self-awareness. This was part of the invite.

I wish I could say that I’d stayed up until midnight last night. My New Year’s Eve gang and I had all caveated our get-together by saying we weren’t sure we’d make it to 12:00 a.m. At a certain point in the evening, I yawned and determined it felt really, really late, so I looked at the clock: 9:40. Oy vey. So, with assistance from the Internet and DVR technology, we forced New Year’s Eve.

In Spain, the New Year’s tradition is to put a grape in one’s mouth with each of the clock’s twelve gongs during the first twelve seconds of the year, “las doce uvas de la suerte,” thought to bode good luck for each of the twelve months as well as ward off witchcraft. We seven adults and five kids crowded into our hosts’ home office in front of the computer and, led by my friends visiting from Granada, watched a replay of a Spanish New Year’s broadcast and stuffed our mouths, leaking grape juice on our pecs but all managing to choke the twelve grapes down. Then we returned to the den to watch the paused 10:00 p.m. replay of New York’s countdown, though somehow it turned out instead to be a co-broadcast of New Orleans (a fleur-de-lis rather than a ball) and Nashville (a musical note rather than a ball) helmed by television personalities with way too much makeup and microphones that looked like large, flesh-colored warts.

We returned home, well sated from the friendship and copious amounts of caviar and blinis, whereupon I hopped onto Facebook to make and break my one and only New Year’s resolution: “In 2013, I vow not to be so annoyed by the annoying phrase ‘love and light.’” Just typing it out annoyed me—resolution broken. If you’re not familiar with these words, they’re the latest “namaste,” a piously overearnest and, to my mind, cloyingly fake way to say “thinking of you,” etc. “Sending you love and light” is its most frequent usage, often in response to someone’s woes as expressed through social media, generally by otherwise lovely folks who attend Burning Man. I think I’m going to start saying “Sending you indifference and sound” instead, because “Sending you hatred and darkness” is a little too negative.

“New year, new you” has been January’s American marketing thrust for years now. Monthly magazines pretty much close their January issues by October and November, having finished the writing, editing, photographing, and typesetting of articles on cleanses, colonics, and canoeing to help us feel like we’re going to be better versions of ourselves with the swipe of the clock’s hands. This follows the December issues’ discussions of how we should implement change year-round, not just in honor of the new year, in keeping with the popular media oscillation of inventing a problem then solving it for you then reinventing the same problem then solving it for you, as tied to the purchase of product.

I personally am fascinated by theories and research on habit formation, in part because I suck at good habits (though I have been flossing regularly for some time now, retaining a mouth that’s cost so much over the years that if I were to die on Law & Order, they’d say, “Someone must be looking for her—that is very expensive dental work”; “heavy is the head that wears the crown,” they say of kings, queens, and bosses. In my case, heavy is the mouth that contains twenty crowns, one on each molar). In 2004, this interest in the implementation of new habits drove me to create “The Resolution Tracking System,” a retired Knock Knock product I believe I’ve blogged about previously but am too lazy to hunt down.

My favorite thing about “The Resolution Tracking System” was its introductory treatise, “On Resolve,” a brief overview of habit formation containing one of my favorite quotes ever, from the late-nineteenth-century psychologist William James (brother of novelist Henry):

There is no more miserable human being than one in whom nothing is habitual but indecision, and for whom the lighting of every cigar, the drinking of every cup, the time of rising and going to bed every day, and the beginning of every bit of work, are subjects of express volitional deliberation. Full half the time of such a man goes to the deciding, or regretting, of matters which ought to be so ingrained in him as practically not as practically not to exist for his consciousness at all.

Until a few years ago, that was me and my flossing, a nightly internal argument that took longer and required more energy than the act itself. In recent years I’ve tried to live on a “need to think” basis (parallel to the better-known “need-to-know basis”), automatizing or delegating (e.g., to GPS) those things that should not require thought, thus freeing my brain for more important and creative affairs as well as for television.

My other favorite aspect of researching for “The Resolution Tracking System” was my discovery of the concept of SMART goals. The acronym varies slightly from source to source, but I have settled on Specific, Measurable, Attainable, Realistic, and Timed. For example, if I want to “play more video games in 2013,” I can’t express it in that manner and succeed. Instead, I must plan to “spend an hour a day playing Grand Theft Auto, hijacking fourteen cars without running into law enforcement before January 15, 2012.”

Other than my blink-and-you-missed-it vow of tolerance for “love and light,” I’m not on a resolution kick for this inaugural month. Too many made and broken over the years, as celebrated a while back by me and my cousin at a break-your-resolution party. Instead, I’m going to keep on trying to improve the things I suck at, one day at a time, as I’ve been doing, with widely varying results, every day of every year since I first realized I sucked at a lot of things. Just in case you want to take the resolutionary plunge, however, I would like you to have the benefit of “On Resolution,” downloadable right here, right now.

In the meantime, I will make and fulfill just one more New Year’s vow: to wish you all the best for 2013 (actually, that’s the second time, as I also did it at the beginning of this post). I and the rest of Knock Knock look forward to hanging out and communicating with you virtually—and if we’re lucky, IRL every so often—throughout 2013, which, in case you were wondering, is not a prime number despite the “13,” as it can be factored to 3 x 11 x 61.