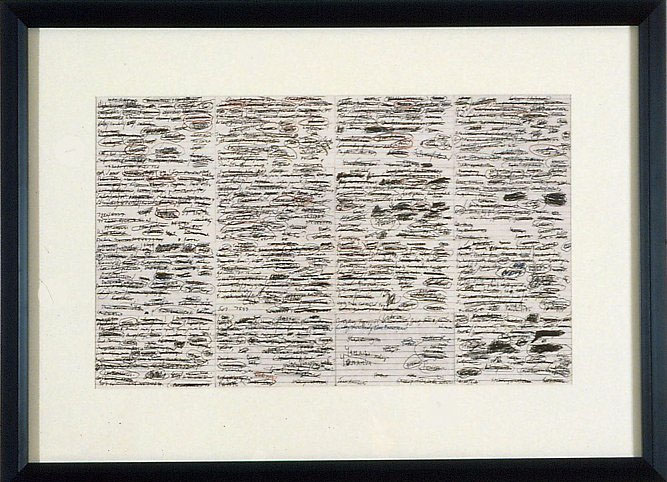 Director John Waters maintains a number of daily routines, including using a single 3×5 index card for his daily to-do list. (Above is an artwork comprised of 16 days of cards.) Here’s more fascinating information on his unusual habits from this feature in the Observer by Ariel Leve:

Certain things are part of his routine. He reads six newspapers – including the British papers – “Even the tabloids do it well” – and every day of his life, Waters writes his “to do” list out on a plain white index card. He pulls a creased one out of his pocket.

In the corner at the top is a number: 3196. How many days since he’s had a cigarette. I’m next – the train I was on – then in no particular order: dinner at 7pm, Christmas shopping – figuring out an art trade – going over some things with his art gallery – talking to an old friend – finishing up something he’s writing for the Wall Street Journal – going to the bank and getting 20 one-dollar bills because “you can only take ones” for his visit to a friend in prison; meeting his accountant. He takes a sip of black coffee. “That’s my day.”

When he’s done with every file card, they go in a box. He’s made an art show out of some of them. He also takes a Polaroid of everyone who enters his house. He’s been doing this for 20 years and they, too, go in a file. “Think about it – if you take a photo of everyone who’s ever been in your house – everyone you’ve slept with – everyone – I mean, I take pictures of the phone man.”

No one has ever said no except one guy who thought it was weird. “So, I said, can I take a picture of your shoes instead, and he said, sure, OK.” He laughs. “That’s creepier I think!”