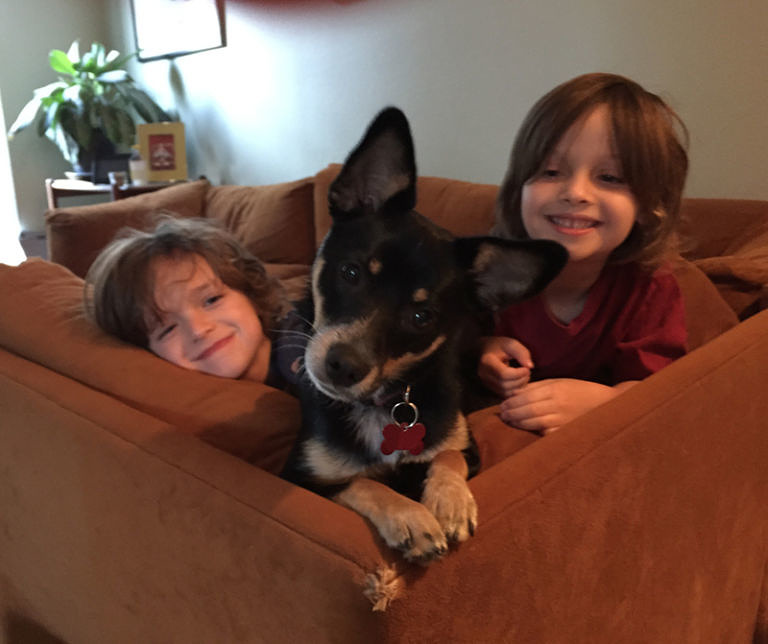 Boone, Lulu, and Wyatt hanging out.

Our dog Mike passed away a little over a year ago and the boys have been pleading for another pet. They wanted one so badly, they were drawing fish, cutting them out, taping string leashes to them, and walking them around the house. I didn’t have the heart to tell them, if they wanted a pet fish, it wouldn’t live longer than 10 minutes into their first walk . . . Maybe 15 minutes, if it was raining.

In December, we decided to get another dog—specifically, a puppy. We figured it would have the energy young boys love. So, we adopted Lulu, a Rat Terrier mix. She’s small and can keep up with the boys. But, since she was just a few months old when we got her, she also wasn’t trained at all. The proof of this was in the near daily piles of poop on our floor. And I’m 80 percent sure they were hers.

Despite the best efforts of my wife and me, we found maintaining a steady training schedule to be quite difficult. After all, when we adopted Mike, we were childless and free to devote hours and hours of that thing we used to call “free time” to getting him to learn the rhythm of our days.

With kids in the mix, the time to focus on a dog simply doesn’t exist. And after a couple of glasses of wine one night, I even implored Lulu to help us out. But she didn’t give a crap about my plea, save for the aforementioned daily deposit.

So, we hired a dog trainer. We both felt great shame in this, but it was worth the money to get Lulu onboard with the family-wide “No Pooping In The Living Room” policy. We quickly learned, however, that a dog trainer’s job is less about dog training and more about dog owner training.

We described out frustrations, what we wanted Lulu to learn. She asked how we’d attempted to teach her, and then she gently explained why we were idiots. In my case, it came down to this: I was trying to act as the alpha dog, when I needed to act as a rational human being with a pocket full of treats. Positive reinforcement, the trainer said, will have more effect than negative.

I stopped saying “NO!” whenever Lulu did something wrong and started giving treats and pats on the head whenever she did something right. And within a day, the potty accidents had stopped. I still got to remain alpha dog because I have opposable thumbs, which make the handling and rationing of treats possible. Let’s see the little mutt do that.

And because I’m a moderately smart human, I realized this theory (sans dog treats) could probably have the same level of effectiveness on my kids. Reward the good; ignore the bad. Now, I know I can’t ignore all of the bad, especially if that “bad” involves a Radio Flyer wagon, a flight of stairs, and a box of bottle rockets. But, I could focus more on the good things—my kids’ victories, their art, their piano lessons, their amazing hair, whatever. So, that’s what I’m doing.

As a parent, it’s easy to get stuck in a cycle of saying “no” without looking for opportunities to say “yes.” I can’t always keep my cool, but I can try to remain mindful. Raising children is stressful, but it’s not only stressful. It can be fun, too. Like the dog trainer demonstrated, it’s up to me to focus on the moments for which I can positively reward my kids, even if it’s just a simple thumbs-up.

And I can do that because I have opposable thumbs.

David Vienna is author of Calm the F*ck Down: The Only Parenting Technique You’ll Ever Need and contributing Knock Knock blog writer. He chronicles life as a father of two fraternal twin boys on The Daddy Complex. Check out more news on David here.