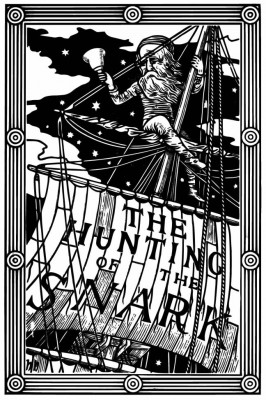 It’s hard not to be snarky about this man’s head.

People frequently describe Knock Knock’s voice as “snarky.” It’s not a description we like, because “snarky” has in its definition ill will, cynicism, and cattiness, and we try really hard not to be mean. Some folks believe the etymology to be a portmanteau of “snide” and “remark,” but this isn’t substantiated by the evidence.

Still others—including, apparently, Google Images—believe that the word derives from Lewis Carroll’s (you know him—he also wrote Alice’s Adventures in Wonderland) 1906 poem “The Hunting of the Snark,” which is too long for us to read on your behalf. From skimming it, however, we concluded that a “snark” is a make-believe creature who, among other characteristics, has a “fondness for bathing-machines,” and turns out in the end to be a “Boojum.” Our first Google Roulette image for “snark” is the poem’s first-edition book cover, an illustration of a sail labeled “Snark” (they hunted the elusive snark by boat) with an abnormally large-headed man clinging to the ship’s mast and clanging a bell.

So where, in fact, does the word “snark” come from? We’re certain we’d have a firm grasp on its etymology if we read David Denby’s entire book on the subject, Snark: It’s Mean, It’s Personal, and It’s Ruining Our Conversation, but the first Amazon review, coupled with all the other things we’d like to do with our lives, stopped us. The review stated that the book is a “fine example of false teleology; the author attempts to construct a chronology of a recent cultural episteme without full knowledge of its discursive history then, completely illogically, projects it back throughout time.” Sounds like a page turner, right?

In the end, the best explanation of the word that we were able to find quickly is this overview, in Google Answers, which links to many more legitimate sources. And that’s not just us being snarky.